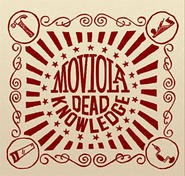 Moviola consists of four American dudes from Ohio, a fact the band has always transmuted into myth via its finely crafted rural rock. Nevertheless, 2004's East of Eager found the group dipping into bluegrass and folk more than any previous release. It's a good record, but the band lacked its typical moxie, sounding subdued, even listless at times.

Three years in the making, Dead Knowledge continues Moviola's immersion in roots music, but the quartet pops and rocks with renewed purpose. In fact, the sprawling disc just might be the best release of the band's 15-year history -- easily as good as 2001's Rumors of the Faithful.

Dead Knowledge unfolds as if Moviola intentionally set out to capture our country's musical experience in its entirety. There's colonial folk, drunken Tex-Mex, field spirituals, punchy R&B, and some of the best West Coast rock since Poco dropped its Crazy Eyes LP back in '74. The piano ballad "Rudy," in particular, drips a restless melancholy that just about any lifelong Midwesterner can lap up. "You always said that living here was just a drag," sings Greg Bonnell. "Ya' shimmied up the pole and stole the flag."

Although Moviola's songwriting and musicianship has evolved greatly since 1998's Glen Echo Autoharp, the band has revived some of the disc's narcotic psychedelia. This is a welcome surprise, one that helps fuse Dead Knowledge's 16 tracks into a truly panoramic song cycle.