Mr. Marmalade at Convergence-Continuum: There’s promise in the premise, but not much more 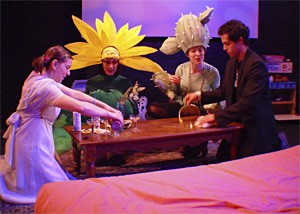 Let's face it: It can be pretty funny when kids talk as if they're adults, like in that E*Trade commercial where the baby hires a creepy balloon clown with his extra "coin." But the conceit can also be a bit tedious, as it frequently is in Mr. Marmalade, now at Convergence-Continuum.

This play by Noah Haidle centers on a four-year-old girl named Lucy (played by a young adult actor, as is the other tot in the show). Lucy is armed with the vocabulary and wit of Paula Poundstone, as she prances around in tights and a tutu. Left alone by her working (and heavily dating) single mom, Sookie, Lucy has a mind that is the ultimate devil's playground ("I'm alone here all day; my imagination runs wild!"). So she conjures visits by imaginary Mr. Marmalade, a businessman who has many meetings, but tries to squeeze in play sessions with Lucy when he can.

As it turns out, Mr. M. has a lot of problems, including a sadistic streak that finds expression in the abuse of his personal assistant, Bradley. Marmalade also has some serious substance-abuse and kinky-sex issues.

On the surface, it's a funny premise. But in Haidle's writing, all the humor is predicated on the dissonance of having adult observations coming out of a child's mouth. As a result, Lucy's too-hip-for-the-playpen personality quickly becomes predictable, and the laughs seem increasingly forced.

Another problem is the casting of Wes Shofner as Mr. Marmalade. Shofner is a capable performer, but he's old enough to be Lucy's grandfather, which adds an uncomfortable dynamic to Lucy's fantasy world. If the younger Stuart Hoffman, who plays Bradley, had switched roles with Shofner, it would have made more sense from Lucy's perspective. And some of the later events — when Lucy and Marmalade run off to Cabo San Lucas, get married, and have a child — might have resonated more strongly.

Even so, the players, under the direction of Arthur Grothe, give this flawed material their all. Especially affecting is Tom Kondilas as five-year-old Larry, a new (real) friend of Lucy and a habitual thief and suicide risk. Kondilas inhabits his pint-size character every second, and he throws away many of his punch lines to sublime comic effect.

As Lucy, Lauren B. Smith is energetic and extremely lithe, twisting herself into all manner of contortions, as little girls will do. But she never finds a deeper truth in the little girl (if there is one somewhere in this script), and so the apparent theme of a little girl left adrift in her own made-up universe never takes on the poignancy it should.

Even a ghastly (imaginary) occurrence near the end of the play isn't enough to wipe the plastic smile off this juvenile, one-joke premise.