Too bad Pedro the Lion's outrageously morose lyrics get lost behind the Christian rep. 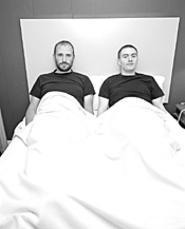 Band press bios are notoriously loaded with hyperbole, self-aggrandizing, and general ludicrousness. But a gem of a line buried in the notes for Pedro the Lion's Achilles Heel instills a new kind of awe. David Bazan, the band's primary singer-songwriter (and, for a long spell there, its only actual member), is describing the joys of making Heel with his buddy and new bandmate, T.W. Walsh: "I just wanted people to be able to hear how much fun T.W. and I had making it."

Hilarious. Achilles Heel's lyrical narratives include a touring van flipping over ("Bands With Managers"); the last thoughts of a man whose legs have been severed by a train ("Transcontinental"); a Communist freedom fighter who commits suicide out of boredom when his cause finally succeeds ("A Simple Plan"); a distracted phone call from a deadbeat, gambling-addict dad ("Start Without Me"); and, to wrap things up, "The Poison," a booze-soaked toe-tapper that ends with the lines, "My old man always swore that hell would have no flame/Just a front-row seat to watch your true love pack her things and drive away."

All this, and we haven't even addressed "I Do," whose lyrics are worth quoting in full:

"And when his tiny head emerged from hair and folds of skin/I thought to myself/'If he only knew he would climb right back in'/I do/Now that my blushing bride has done what she was born to do/It's time to bury dreams and raise a son to live vicariously through/The sperm swims for the egg/The finger for the ring/If I could take one back I know what it would be."

In fact, Achilles Heel is a vast improvement in the Miserable Family Department over Pedro the Lion's last record, 2002's hideously undervalued Control, wherein Bazan mentions adultery with the same frequency and intensity as Ludacris references ho's. In fact, during impromptu onstage Q&A sessions on Control's tour, he admitted that his wife had specifically asked him not to play the explicitly racy song "Rapture" live, which seemed perfectly logical from her point of view. ("This is how we multiply/Pity that it's not my wife.")

Turns out, it wasn't the adultery angle that bothered her.

Mrs. Pedro the Lion evidently doesn't mind "I Do" and other take-my-wife-or-at-least-replace-her-please songs in the band's oeuvre. "We have a pretty good understanding," Bazan says. "We have assessed the risks of marriage. We try to be pretty transparent about a lot of that stuff. She certainly isn't hearing it, thinking, 'I wonder if he thinks that sometimes -- is he just not saying anything about it?'"

Sounds like a wonderful marriage, but even Pedro's biggest fans have trouble wrapping their heads around the sheer depressiveness of such lyrical bile. What's initially great is the dichotomy between the absurdly dour lyrics and the sunny, sleepy music that supports them: a sort of slowed-down, guitar-distorted singer-songwriter vibe pinned down by Bazan's resonant, basso profundo voice. Whereas Control was blustery and loud and filled with some of the most psychotically furious drum fills known to man, Achilles is quiet and pastoral, even peppy. This bait-and-switch is deliberate. "To a certain degree, maybe, that was kind of the idea, hopefully: The vibe of the record would sorta contradict some of the lyrical tone of the songs," Bazan says. "It'd be guys having fun making a record about really depressing things."

But depression, of course, is relative: Take the legs-severed-by-a-train number, for example. Fans describe Pedro the Lion's music as outwardly despairing, but subtly imbued with hope -- where's the goddamn hope here?

"The question is, hope for what?" Bazan responds. "It's just a matter of time, really, before each of us stops breathing -- is it hope for just a good ride? A guy dying in that way, is that hopeless? I think, particularly in the modern West, we think of our own lives as being slightly more important in the scheme of things than they really are."

Incidentally, Bazan thinks about his own death a lot, in the touring van at least. "Band With Managers" -- which kicks off Achilles with some surprisingly badass falsetto action -- begins as a diss on fame-hungry rock stars, but soon dead-ends into the odd diversion "Vans with 15 passengers are rolling over/But I trust T. William Walsh and I'm not afraid to die."

"That second verse is really more about me trying to figure out how to sleep on the road, 'cause it's nerve-racking -- 'cause you're picturing the van careening off the road," Bazan says. "I just sort of developed this mantra . . . I realized if I said, whoever it was, 'I trust so-and-so, and I'm not afraid to die,' I was able to go to sleep in peace."

Pedro the Lion's biggest problem is that most underground tastemakers ignore all the above intrigue and focus on Bazan's Christianity. He is dismissed as a self-righteous Bible-thumper, despite the fact that his religious-themed songs explicitly denounce self-righteous Bible-thumpers. "There was a theme I wanted to communicate," he told a 'zine interviewer about Pedro's 2000 album Winners Never Quit. "Damnation for the arrogant, judgment for the judgmental."

Achilles Heel picks up that thread with "Foregone Conclusions," a sort of Bible-thumper-thumper that'd be the Big Statement on most indie-rock records, but actually provides comic relief here, along with the tune about the drunk guy shitting the bed. (Don't ask.) The God Squad charges will forever be Pedro's major journalistic angle, but that shortchanges both Bazan's melodic power and lyrical subtlety. Leave Jesus out of it already. More often than not, he does.

The fans lucky enough to cut through the crap are still with Pedro, though, and they honestly seem more concerned with the fact that Achilles is not a concept album -- both Control and Winners Never Quit boasted tracklist-spanning linear story lines, whereas this record's tunes stand alone. Bazan just felt it was time for a change. "After making two sort of spiraling epics, Paul Thomas Anderson made this weird romantic comedy with Adam Sandler in it," he notes. "I'm certainly not saying that Achilles Heel is Punch-Drunk Love -- although I wish it was."

Perhaps it's Sandler's legs that got crushed by that train. Now that'd be a fun record to make.