Tatiana James gets the party started. 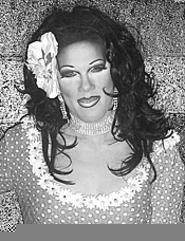 Tatiana James was driving back from a drag show in Columbus this spring when her cell phone rang. The Rock and Roll Hall of Fame was calling about a benefit at the Convocation Center.

"They wanted a drag queen to sit there for an hour and eat Chinese food," recalls James, the 21-year-old reigning Miss Akron USofA. She found the request rather odd, but she took the $100 job. "I sat there and ate 150, 200 chicken-on-a-carrot-stick thingies," she says. "I never saw anything like it. After that, I never wanted to eat chicken again."

John Vanderslice wallows in grief with more verve and fighting spirit than most of his indie-rock brethren. He rarely sounds beaten by his misery, just a little worn. On his fourth album, Cellar Door, his most accomplished work, he garnishes his tales of romantic woe with super-spiffy production that brightens the corners and eludes convention. Few of his songs bust out of the singer-songwriter structure; once he settles in, he's there for the long haul. But once the bells and whistles (or maybe they're just finely tuned guitars and synths) arrive, Cellar Door and Vanderslice find new purpose: chamber pop for the downhearted. It's more intimate live, where the words matter more than the music. Vanderslice plays the Grog Shop (2785 Euclid Heights Boulevard in Cleveland Heights) at 9 p.m. Saturday. Tickets are $10 and $12; call 216-241-5555. -- Michael Gallucci

Alternative country. No Depression. Cowpunk. No matter what you call it, a meaty slab of it will be served Saturday at Canton's Rock 'n' Roll Hoedown and Bar-B-Q. Ribs, steak, and burgers will be grilled outside, while three area groups -- the Whiskeyhounds, the Darlin's (pictured), and Ryan Humbert & the Hand-Me-Downs -- rock the stage inside. "This is a good way to showcase some of the local alt-country bands," says the Darlin's' Nick Regas. "And since Ryan and the Whiskeyhounds do it so well, we're gonna punk up our set a little. We're gonna take out some of the twang." It starts at 8 p.m. at Flavors Pub, 3000 Atlantic Boulevard in Canton. Admission is $5. Call 330-455-2183 for more info. -- Michael Gallucci

THU 6/24 A Hostage and the Meaning of Life, the debut album by Indiana's Brazil, slaps its natural emo tendencies upside the angst-ridden head by mixing in a hefty chunk of artsy punk. The result is a work that's as challenging as it is invigorating. Brazil's at the Rhythm Room (2140 South Taylor Road in Cleveland Heights) with Silverstein at 7 p.m. Thursday. Tickets are $10. Call 216-321-4073 for more information. -- Michael Gallucci