Mr. Self Destruct Blows Up

Trent Reznor does it again. 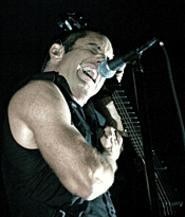 It was about 10 minutes into Nine Inch Nails' set when Trent Reznor asked God to apologize for His shortcomings.

Even heavenly beings are fatally flawed in NIN's grim canon, as evidenced by songs like the faith-shaking "Terrible Lie." The rest of us hardly stand a chance.

So it was fitting that dark, foreboding storm clouds hovered above Quicken Loans Arena last Sunday, where thousands stomped their feet and held lighters aloft as Reznor sang songs about how much it sucks to have a pulse.

Nine Inch Nails' tunes come with a lot of baggage -- self-absorption, self-loathing, self-flagellation (see a pattern?). But Reznor wears his narcissism as well as he does his shiny black leather pants. What makes NIN such an invigorating arena rock act is Reznor's ability to make large crowds of people eager to share his pain -- no matter how myopic it may initially seem. Paying good money to expose oneself to a mushroom cloud of melancholy seems counterintuitive. Why plunk down $45 to get hit over the head with a laundry list of life's letdowns? Aren't mortgage payments, hangnails, and Regis Philbin's new Christmas album enough for us to endure?

But what stops NIN from becoming a caricature of self-pity is how forceful and full of life the shows are. Reznor occasionally sounds sullen and wan on his band's records, and it's easy to dismiss him as a mope. But live, NIN's songs feel more cathartic than depressive. Once Reznor hits the stage and begins thrusting his guitar and his elbows at the crowd, NIN becomes that much more compelling. Instead of wallowing in despair, the dude hurls a mic stand at his insecurities.

From the moment the lights went down and NIN launched into the chipper "Love Is Not Enough," Reznor turned his angst into a cardio fitness routine. Sweating and swearing, he hunched over his guitar like an inmate guarding his lunch. He sang from the balls of his feet, occasionally leaping in the air with his arms outstretched, clicking his heels together. It was as visceral and overheated as machine music gets.

Though NIN turned in surprisingly stiff and lumbering versions of blood-boilers like "The Wretched" and "Burn," they generally added more torque and tension to their catalogue. "Gave Up," a song about surrendering to uncertainty, became more defiant than defeatist. The band scoured all the slickness off the dance-floor-friendly "Sin" and turned "The Hand That Feeds" into an abrasive thumper meant for hell's discotheque. Whereas many groups flesh out their sound live, NIN does the opposite, boiling songs down to their angry essence.

But for all the intimacy of NIN's music, which can be nakedly confessional, the band members reveal little of themselves live. The stage was mostly backlit, hiding their faces in the shadows. Thick clouds of evaporating dry ice and throbbing strobe lights further obscured the group. Reznor seldom addressed the crowd, though after an interruption in the band's visual presentation, he paused to berate the "fuckheads" running the video feed and assured the audience that they'd soon be fired.

It was hard to tell whether Reznor was joking or not, and that's part of NIN's dark charm. One of the main reasons NIN's worth paying attention to is Reznor's unwillingness to bite his tongue -- even if it means he comes off as an asshole. It's a little off-putting for Reznor to lash out at his crew in public, but we'll take a dude who's up front about being a demanding S.O.B. over someone who fakes being a nice guy. At least you know what you're getting with Reznor.

Besides, here in the real world, we all have to keep our emotions in check on some level. Reznor's reluctance to follow suit, which only rock stars and professional wrestlers can get away with, helps explain why so many people show up at his gigs to vent vicariously through him. Sure, it feels kind of juvenile to cheer on a grown man as he smashes his gear and throws temper tantrums. But despite the bleakness of Reznor's tunes, he still manages to find a way to make his audience smile.