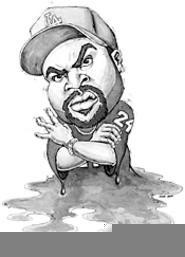 
Dear O'Shea,
I'm sorry, Mr. Jackson. You were for real. I don't mean to make you or your daughter cry. I apologize a trillion times. But you've fallen off. And today is not a good day. I saw the lights of the Goodyear Blimp, and they read: "Ice Cube's a wimp."

I don't know you. Not really. And you wouldn't recognize me on the streets or at the Compton swap meet. Of course, I probably wouldn't know anything about either one, if not for you.

You taught more lessons in two hours of music on Death Certificate and The Predator than I learned in 12 years of social studies. That was before class was dismissed. Before Ice Cube's vitriolic voice melted into the mainstream. Before you went from being "the nigga ya love to hate" to the soccer dad ya love to love.

I'm not a purist. I'm not whining about how hard you used to be, before you cut your Jheri Curls and stopped tossing verbal Molotovs. Before you went Hollywood. I don't care that you no longer advise people to new-jack swiiiiiinnng from your nuts. I respect your maturation as a man and an artist.

At least I did.

You made lots of cash when Barbershop 2 opened, and you'll rake in the gross domestic product of Honduras over the next couple of weeks. Your motorcycle opus, Torque, is already revving the box office. And Terrorist Threats, your new Westside Connection album, is perched in the Billboard Top 20, as the single "Gangsta Nation" sizzles on the airwaves.

People will buy anything you do. You're a human ATM; you've got the Midas touch. But just because you can sell us anything doesn't mean you should. And lately you've sold yourself short. The gangsta image and that constipated scowl no longer suit you, and yet you're determined to pretend you're still ducking drive-bys on Crenshaw Boulevard.

You moved on as a musician with Lethal Injection and War & Peace, only to make empty Terrorist Threats. You progressed as an actor with Friday and Three Kings, only to make brainless bombs like Torque and All About the Benjamins. And you couldn't leave Barbershop alone. You had to make a sequel. Just the way you milked the Friday franchise until all freshness had drained. All for what -- an easy fix, an easy role, an easy dollar?

You taught me better.

When I first met you, it wasn't as the crazy motherfucker named Ice Cube coming Straight Outta Compton with N.W.A. I didn't know you as Amerikkka's Most Wanted, either. You were Doughboy, the lumpy philosopher-felon from the 1991 movie Boyz N the Hood.

I didn't know about drugs and drive-bys, Bloods and Crips, Fat Burger, and Olde English 800. But that movie allowed Wonderbreads like me to decipher inner-city hieroglyphics. "I do records for black kids, and white kids are basically eavesdropping," you once told Spin.

Guilty as charged. Suddenly, farm kids were talking about banana clips and nappy dugouts. Bumping "Steady Mobbin'" en route to the bowling alley. "It Was a Good Day" made an uneventful 24 hours in South Central infinitely more exciting than a chaotic day in my town.

"Either they don't know, don't show, or don't care about what's going on in the hood," Doughboy said at the end of Boyz N the Hood.

Most middle-class kids didn't know. Most media didn't show. And most parents didn't care. Check that. The parents did care -- at least about keeping Ice Cube records out of our hands. You panicked the placid suburban waters. You rattled the white picket fences with talk of violence and injustice. You spoke about police using people as piñatas before Rodney King. You prophesied that Los Angeles would burn.

Your rhymes jabbed a scalding poker at the hidden anxiety that makes people roll up car windows and lock doors in black neighborhoods. The only way for suburbanites to avoid urban ugliness was to retreat. But your assault couldn't be repelled. There was no way to lock the doors and roll up the windows and prevent Junior from learning "How to Survive in South Central" while growing up in Cul de Sac, New Hampshire, and Three-Car Garage, Montana.

It mortified parents and mobilized kids. But it wasn't just about the fashions, the phrases, and the excitement of a lawless foreign world. Even as you spat invective about "Jews, Japs, fags, crackers, bitches, hoes, and house niggas," you were still a poignant appraiser of reality behind demographic boundaries.

Then you moved on. Matured. Became a movie star. Rhymed about clubbin' instead of thuggin'. After Friday and Barbershop, you became the guy next door. Happily married. Doting father of four. You went from public enemy to public deity. Began talking more sweet life than street life. And that was fine.

But now you're taking ill-advised steps backward. You need to stop the posturing. Stop the hollow albums, low-road movie roles, and fake snarls for the cameras.

You are better than that.

You haven't lost skills. You've lost focus. And respect may not be far behind. Protect your legacy. Challenge yourself. Don't follow the rabble-rousers whose music now sells luxury cars. Follow one of your own basic tenets: Check yourself. Before you wreck yourself.