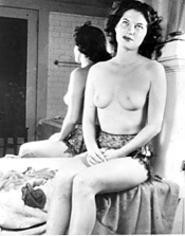 And it's hard not to chuckle at the poor sap at the center of "On the Beach," which features a goat, a hole in a fence, and a side-splitting turn into implied bestiality. Or at the outrageous wigs and heavy makeup worn by the performers. Or even at the pun-happy pseudonyms ("Free Ride" was directed by A. Wise Guy and photographed by Will B. Hard). But there are "an awful lot of these that are just boring," Cohen says of the flicks in his collection that didn't make the cut. "All they're interested in filming is two people making love. That could be exciting -- but the way these people photographed, [in] extreme long shots, it's just dull."