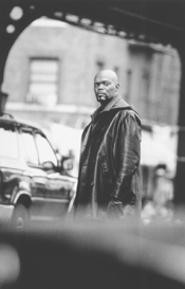 The title of the 1971 Gordon Parks detective movie Shaft worked as a double entendre -- when it presented Richard Roundtree's "black private dick" John Shaft as a superstud, at whom women of every race threw themselves, it wasn't hard to believe. The joke changes when the name is given to Samuel L. Jackson, with his big, ungainly cranium and his rigid monolith of a torso. His whole body looks like a shaft, of the sort that supports a highway overpass.

Jackson is no Roundtree -- he's more, and he's less. He's an actor of uncommon depth and force, who has both tragic bearing and wicked comic timing at his disposal. But Roundtree, a far more limited actor, had an abundance of something that Jackson lacks -- sexual magnetism.

Fortunately for the highly entertaining new version of Shaft, in which Jackson stars, director John Singleton and his screenwriters (Richard Price and Shane Salerno) seem to recognize this gap in the range of their leading man. Early on, Jackson's John Shaft -- the nephew of the old film's hero -- engages in a bit of thoroughly unconvincing sexual banter with a barmaid in the Lenox Lounge, apparently for no other reason than to establish him as a heterosexual. That done, the matter is dropped, and sex is neither seen nor discussed in the film thereafter.

The new Shaft, like the old, is inevitably about race, but here, too, the subtexts have changed. Roundtree's Shaft was a self-consciously pissed-off black dude, and the movie's best running gag was his habit of always bringing up his race first, preemptively, with the polite, deferential white people he encountered. When, near the end of the movie, he at last met an overt racist -- an Italian gangster who called him "nigger" -- his eyes gleamed with pleasure at meeting someone so straightforward, and he returned the favor, calling the man "wop."

Jackson's Shaft is a less complicated man. He meets a sneering racist in the first scene, and he simply punches him in the nose -- twice. A disillusioned New York cop rather than a no-illusions New York PI, he's a matter-of-fact, avenging-angel hero, almost naive in his sense of virtue, and he responds to racism, overt or subtle, with impatient, scolding indignation.

The new Shaft is much simpler, overall, than the original. It's not a remake, but a sequel once removed, and like the title character and his namesake, it's a nephew rather than a direct descendant -- the two films aren't really from the same genre. The 1971 Shaft, based on a novel by Ernest Tidyman, was a hard-boiled detective yarn in the tradition of Hammett and Mickey Spillane. The 2000 Shaft is a plain old cop thriller in the tradition of Starsky and Hutch, with a melodramatic, morally unambiguous plot and loads of slam-bang action scenes. And, very surprisingly, it's as enjoyable as any American shoot-'em-up has been in years.

Jackson's Shaft is matched up with two terrific villains -- a vicious, race-baiting rich white kid (Christian Bale) and a murderous Dominican drug lord (Jeffrey Wright) who speaks in chillingly mild, reflective tones. This Shaft also comes equipped with a loyal partner (Vanessa Williams), a comical sidekick (Busta Rhymes), and, in Toni Collette as the haunted, hunted witness to a racially motivated murder, a first-rate damsel in distress to protect.

The film represents a shot in the arm for director Singleton. After debuting young with the strong, heartfelt Boyz N the Hood, he has never fully found his balance, despite the potency and passion of the overambitious but underrated Rosewood. Yet Singleton handles Shaft with effortless skill. He may have been liberated by the opportunity to try for nothing more than slick commercial excitement. In any case, that's what he got. Make no mistake, this Shaft is a smartly made movie without a brain in its head -- it's pure, swaggering, testosterone-soaked escapism.

Singleton was also able to capture, with the help of cinematographer Donald E. Thorin, some of the visual flavor of the original film, even in telling this very different story. People still are sent flying out of windows, guns still blaze in dilapidated stairwells, and stirring Isaac Hayes funk still swells and soars on the soundtrack, to the point that '70s nostalgia is satisfied. (I speak from some experience here -- at around age 10, I went through a phase of wanting to be John Shaft myself. Nothing about the fact that I was a white kid in rural Pennsylvania made this aspiration seem incongruous at the time.)

There are touches in the new Shaft -- our hero hurling his NYPD badge like a throwing star at a judge (Pat Hingle), for instance -- that border on camp. But the new film's only real disappointment, apart from its asexuality, is the decision not to let Shaft the Younger's Uncle John help out on the case. Roundtree, looking sly and mellow, is present for a few brief courtesy scenes, but he isn't given anything to do other than offer a bit of sage advice to his nephew. It's a missed opportunity, but Singleton does, at least, give Roundtree a great exit in one scene, paying homage to his way with the ladies.