More love from the makers of "Danger! High Voltage" and "Gay Bar." 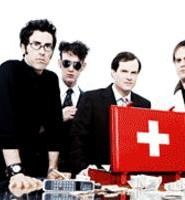 Over the past three years, Electric Six frontman Dick Valentine has persevered through enough music-industry bullshit to make even the most committed showman give up on his dreams. But the leader of Detroit's most deserving and least appreciated band has taken chronic lineup and label problems in stride, continuing to play raucous concerts and make great records, including Switzerland, the new full-length.

The group's inventive splicing of arena rock, new wave, and comedy hasn't translated into the sales that made millionaires out of irony-laden rockers like the Darkness -- which, unlike Electric Six, doesn't have the artistic vision to overcome its novelty status. After garnering considerable success in England with his band's 2003 debut, Fire, Valentine is still happy to be sitting in a van crammed with sweaty dudes and gear, traveling through Canada en route to a Seattle gig.

"I think we're in a really good position now, where we may not have millions of fans or sell millions of copies, but the people who like us are waaaay into us. And that's why we have such a strong live following wherever we go," says Valentine. "The days of us playing the Brixton Academy are over, but we can still put 300, 400 people in a room wherever we go. And that's all we ever hoped to do."

Valentine founded Electric Six in 1996, calling it the Wildbunch. He'd flex his stage presence in acrobatic dances and threats to cover "The Freshmen," the Verve Pipe's awful smash, if audiences didn't buy $100 worth of merchandise. Then the band changed its name, and XL Recordings released Fire to widespread critical acclaim. Two of its cuts -- "Danger! High Voltage" and "Gay Bar" -- became Top 5 hits in the U.K.

Then the trouble began.

Shortly after Fire's release, Valentine replaced three band members. Despite the Electric Six's commercial and critical success, its label dropped it. Rushmore Records, Warner Music's British imprint, snapped the band up and released its 2005 album, Señor Smoke, in England, but soon lost interest; it dropped Electric Six without releasing the record in the States.

For Valentine, it's a welcome new era of stability. "It feels great to be in a situation where I don't have to worry about the band imploding the next day," he says. "Every day I get to be in this lineup -- as opposed to the previous lineup -- is a gift."

The band wasn't a free agent yet when Dave Heckman, head of the industrial/goth clearinghouse Metropolis Records, caught its show in San Francisco and expressed interest, setting the stage for the eventual unlikely pairing. The home of KMFDM and VNV Nation rereleased Smoke in early 2006 and Switzerland in September.

After a crash course in label/band relations, Valentine has emerged as a disaffected realist. "The days of bands staying with labels for long periods of time are over," Valentine says. "You can't spend a lot of time getting bummed out, because these things happen to everybody."

Musically and lyrically, Switzerland represents a departure of sorts for Electric Six. The hot dance moments in the group's back catalog have mostly been replaced by anthemic rockers. It' s not hard to imagine fans of Devo and Journey cavorting in a concert hall with Switzerland blasting through Marshall stacks.

Valentine calls the record his most complex lyrical effort yet. His trademark humor still colors the disc, but thankfully, he avoids catch phrases and double entendres in favor of storytelling on tracks such as "Pink Flamingos" and "Germans in Mexico." The lack of dance fodder -- accompanied by ominous titles like "Pulling the Plug on the Party" and "Infected Girls" -- hint at the darker side fans have been discussing since new tracks became available at the band's website. Switzerland is still an invigorating romp, but more than any other Electric Six record, it hints that the party is winding down.

"They're probably right," Valentine says. "When you're writing songs like 'Gay Bar' -- which aren't lyrical masterpieces -- and then you do a 'Pink Flamingos,' exploring the depths of a man's soul, people tend to get bummed out. It's certainly not a concept record. It's just the 13 songs we wanted to do at the time."

Switzerland does contain enough references to debauchery to perpetuate the perception that the sextet's road life is an endless string of drugs and parties, which Valentine says is a bit inaccurate. "When we tour the States, we do everything ourselves," he says. "There's a great deal of breaking down and loading equipment after a show. After that, it depends on who you are. I won't comment on who does what, but some people in this band do more things than others."