LeBron betrayed Cleveland; the Prince of Daytime Television put money on it. 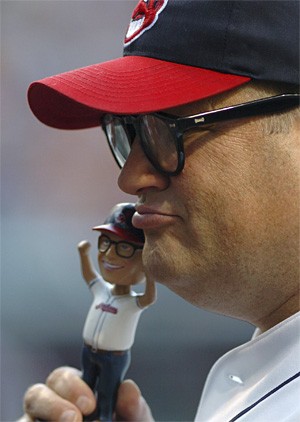 I'm slumped in the Viva Las Vegas Lounge, a swanky bar in the City That Never Stops Reaching in Your Pocket and Saying, Is That a Quarter? I would be gambling, but a blackjack dealer named Jimmy just pulled 85 consecutive 21s, causing me to lose my bankroll before the arrival of my first "free" Corona. So I'm drinking seven-dollar beers instead.

While the bartender runs a credit check — I'll need a loan from the International Monetary Fund to pay for my Bud Light — something improbable and beautiful appears, like a desert mirage or a Saved by the Bell rerun: Drew Carey, in the high-limit room, playing blackjack.

He's wearing his black-rim glasses and old-school Indians hat, the kind from back when Chief Wahoo was the size of a real Indian. If this were a different celebrity with a different go-to look — say Nicholson in his trademark shades, or Lindsay with that trademark kilo dusting her upper torso — I might have thought it was an impersonator blowing off some steam after work. But there's no money in impersonating Drew Carey, not unless you can sneak onto the lot of The Price Is Right and steal something from the Showcase Showdown — which, by the way, would be genius, and a much better story than this one.

As I watch Drew play $500 hands of blackjack, it hits me: I have to talk to him. Why? Because I'm from Cleveland!

The scenario plays perfectly in my head: I'll offer him the sort of firm, warm hand only an Ohioan can. Then I'll show him my Scene business card. He'll be so excited — "Cleveland Rocks! Take a seat, New Best Friend!" — he'll buy me a drink, toss me a few black chips, and, after a rousing night of high-limit Pai Gow, he'll invite me to Los Angeles to co-host The Price Is Right. I'll briefly act ambivalent — "I dunno, Drew, my coed kickball team kinda needs me" — before trying like hell to spend the night in his suite so he can't renege in the morning.

But when I finally get the nerve to talk to Drew, he seems disappointed that I've interrupted the (quite boring) story he's telling, about some epic gambling adventure he once had.

(It turns out Drew Carey really likes to gamble. Keep this in mind if you're ever on The Price Is Right and Drew urges you to "just go for it.")

Drew takes my card and endures my interrogation about replacing Bob Barker. He seems especially intrigued with my thoughts on how Bob's retirement will affect the pet population. Then he stops paying attention to me.

Eventually, I leave him alone and retreat to the peasants' blackjack table to piss away another paycheck. Whose Line Is It Anyway? pretty much sucked anyway.

But the next day brings a clearer vision. It's Saturday, the High Holy Day for college football fans. I'm in a sportsbook, rooting for Michigan State to cover against the Buckeyes. Around halftime, Drew walks in. Apparently one asshole (me) harassing him about Cleveland (still me) was enough for one weekend, because he's ditched his hat and glasses, and now looks just like the rest of us — an overweight degenerate. But I recognize the unquenchable thirst for action in his eyes. He's eyeing the lines, studying the board like it's 3 a.m. at the Steak 'n Shake drive-through. That's when I realize: He's looking at the Tribe game.

Did I mention it's that weekend? A few hours from now, some guy from the Lakewood softball league will take the mound at Fenway, dressed in a Fausto Carmona disguise, and proceed to get shelled like a Baghdad mosque. And Drew Carey is going to have money on it.

It's at this point that I start to wonder what kind of side bets Drew has going on Plinko. Double or nothing on the price of that toaster oven! Still, I'm surprised he wants to bet the Tribe. I'd asked him about the Indians the night before, and he'd struck me as oddly nonchalant: "Whatever happens, happens," I believe he said. It was very Manny, whatever it was.

But he seems more into it now as he counts out $100 bills and hands them to the cashier: 1, 2, 3, 4 . . . all the way to 10, a cool thousand bucks. He gets his ticket and starts to walk out, probably to bet the elevator guy which car will come down first. Never one to let a new friend pass without saying hello, I yell Drew's name and remind him of our Cleveland bonding the previous night.

He shakes my hand. I ask him "who he likes," hoping my firm grasp of addicted-gambler parlance will solidify our rapidly deepening friendship. He tells me that he bet the Tribe and the under, which means the total score will have to be less than 9.5 runs. This is a pretty dumb bet, I think to myself. But I don't tell Drew this. I tell him, "Go Tribe," and wait till he's gone to make fun of him, even though he could lose $1,000 on every baseball game for the rest of his life and still afford to pay Wayne Brady to kick my ass.

As the night goes on, and both of Drew's bets quickly evaporate, I think about my new friend often. Though I worry about what else he might gamble on this weekend — "What kind of odds do you guys have on Kid Nation?" — I'm actually warmed by his faith in the Tribe. My other celebrity friend, LeBron James, whom I've known since he totally ignored me in the Cavs' locker room a while back, betrayed me and his city by wearing a Yankees hat. Drew — gambling-addicted moron that he may be — at least is a homer.

I want to tell Drew this. I look for him that night at Tryst, a nightclub at the Wynn Hotel that's a lot like Disneyland, only with cokeheads and $18 drinks. But I see only former Cleveland celebs Ron Harper and Mike Fratello. Makes sense: It's been only a few hours since the Tribe completed the first leg of the Fenway Fuckup of '07. If I know Drew, he's probably back at the sportsbook, looking for a way to win his money back. Thank God for NFL Sundays — and thank God for Drew that the Browns have the weekend off.