Two seconds will make or break the NFL career of Dave Zastudil. 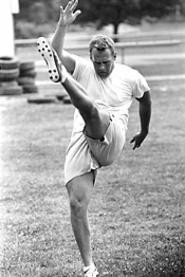 The luckiest guy on the field is the one standing alone on the sideline with the dainty face mask, stretching his legs like a ballet dancer. He needn't worry about missing the game-winning field goal. He rarely needs to hit or be hit. And unless he really, really sucks, he can slip by unnoticed, especially when blame for a loss is doled out. Still, even entry-level wages for his job register a half-million in the first year, more in years to come.

He is the punter, and he has the easiest job in football. It's just not wise to mention this to Dave Zastudil.

Don't think. That's the only thought that flashes through Zastudil's brain as he squints down the Bay Village High practice field. It's a 90-degree July morning, and Zastudil is sweating through shoulder pads and a helmet. In front of him is a brown slat fence, a baseball diamond, and beyond that, the school.

But Zastudil sees none of this. "Before I kick, I visualize my surroundings," he says. That means there are 10 blockers in front of him, with 8 defenders charging, each of whom would dive for a football like a war hero on a live grenade.

Zastudil grips this image. He even seems nervous. He takes a deep breath, licks his fingers, then wipes them on his thighs. And just before he holds his hands out for the snap, another vision seizes his mind: a picture of the perfect punt.

The ball is snapped. Zastudil has approximately two seconds to make that vision a reality. If he can't, there's no place for him in the National Football League.

It's a lot of pressure. And it's why Zastudil, a Bay grad, can appreciate a job that everyone else takes for granted. He wants to be the punter for the Baltimore Ravens. This is his lonely science.

At 6 foot 3 and 225 pounds, Zastudil still has the long, lean build of a quarterback, his position at Bay and his claim to a scholarship at Ohio University. But he punted for the Bobcats, too -- and did so well that he was named to freshman All-American teams. So he ditched dreams of quarterbacking for the more realistic if less glamorous vocation of NFL punter.

During the next four years, Zastudil spent his summers at the Bay practice field. "I sort of taught myself," he shrugs. A video camera helped him pick out flaws in his form. His father hiked the ball, while his uncle provided the rush.

Each punt represents a series of minutely timed movements, all compressed into those critical two seconds. Zastudil catches the ball away from his body and taps it on his left thigh to gauge his timing. His leg is already launching upward as his hands spin the ball to its proper place, dropping it at just the moment his foot explodes past his waist. If he's on, a half-inch of his foot will collide with the proper half-inch of the football, and this will make the ball spiral just as he chooses, go left or right, long or short.

"You do drills and drills to get that muscle memory," Zastudil says. "So when you kick it, you don't think a thing."

The best punters can shut out the world the moment they step on the field. Browns punter Chris Gardocki is in a trance by the time the ball is hiked.

"When I go out there, I don't hear anything," he says. "I don't see anything but the ball and what's in front of me."

Gardocki refuses even to watch tape of himself. After 10 years in the league, he says "punting is a rhythm" that he has memorized. Zastudil speaks enviously of Gardocki's "get-off speed" -- the time a punter holds the ball before kicking it. That's 1.25 to 1.5 seconds in Gardocki's case, and it's the main reason he holds the NFL record for most punts without a block. Yet Gardocki is loath to speak of the matter. "I don't worry about things like that," he shrugs.

Even his position coach, Jerry Rosburg, knows to observe silence. "I don't know what you're talking about," he says when asked about the streak. "That's taboo."

Nothing unnerves a punter like having his kick blocked. It's usually the fault of a blocker who missed an assignment, but the punter feels the impact. It will destroy the delicate psyche of some punters, who might hurry their mechanics and botch the next few kicks.

Zastudil hasn't had a block since his sophomore year at Ohio, but when he arrived in Ravens training camp at the end of July, the coaches instilled that fear anew. The first week, he kicked under pressure from eight of the fastest players he had ever seen on a football field. "Knowing there's a lot of speed up there . . .," he says, then cuts himself off. Thinking about his opponents' speed will only clutter his mind and disrupt his timing. "That's pressure I put on myself," he finishes.

In other words, Zastudil was finding it hard not to think.

He was drafted in the fourth round, a lofty place for a punter. Most punters arrive in NFL camps without ever being drafted. So Ravens fans -- as well as the Baltimore media -- were expecting something extraordinary from Zastudil.

The crowds weren't much of an adjustment; he has kicked in Ohio Stadium. But the fact that there were a couple thousand people at practice was jarring. Nor was he used to having another punter -- fellow rookie Alan Cox -- trying to take his job.

Reports trickled out of camp that Zastudil's kicking was inconsistent. After a few sub-par punts in the first preseason game, when he averaged just 38.8 yards, he was deemed "shaky" by Baltimore Sun sportswriters. Zastudil picked up the paper another day to learn that, because he had been a high school quarterback, he would be expected to throw passes on fake punts. The coaches hadn't even mentioned it.

On the eve of the Ravens' second preseason game, Zastudil was still wrestling to clear his mind. "You have to stick with what you do," he says wearily. "It's just amazing how many outside distractions there can be, if you put them on yourself."

The next day, Zastudil kicked three long, towering punts and finished with a 50.3-yard average, which is exceptional. The emergence of Baltimore's young punter was a highlight in an otherwise dismal game, which the Ravens lost 34-16 to the New York Jets.

The performance cemented Zastudil's place on the Ravens roster. Though he would still be entitled to keep his signing bonus of $305,000, the Ravens could have voided his three-year, $1.21 million contract -- of which he'll receive $225,000 this year -- if they had cut him from the squad. He will be an NFL punter after all.

Whatever jubilation that brings, it's tempered by the fact that from now on, his work will be psychologically grueling, yet largely taken for granted.

Take it from a veteran punter. "As long as you're not doing it," says Gardocki, "it's the greatest job on earth."