Browns personnel guru Pete Garcia steps out of the fog. 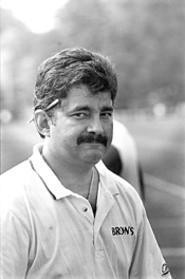 He was Cleveland's most mysterious bushy-haired stranger since Sam Sheppard stumbled out to the beach.

The day the Browns lured Butch Davis from the University of Miami, a Plain Dealer zoom lens captured the coach entering the team's Berea headquarters. A figure in a raincoat trailed Davis by a step. The man behind the mustache was Pete Garcia, the director of football operations at Miami. He and Davis were obviously a package deal, but it remained to be seen what Garcia would do here. The Browns already had someone with that title -- Dwight Clark.

For a year, the team let media and fans draw their own conclusions. Garcia was kept from reporters. He was listed as "assistant coach/football development," but he didn't actually coach. Further adding to his mystery, he was born in Havana. Cubans are as exotic to the NFL as Norwegians are to jai alai.

But during the off-season, Clark got the hint. The Browns were Davis's to run, and he had all the help he needed. Clark quit. Garcia stepped out of the shadows and into a formal role as the director of football development. Essentially, he manages the day-to-day operations of the personnel department, his chief concern being the college draft. Only now, no one has to pretend to keep Clark in the loop.

"It's pretty much the same thing I've been doing for the last eight years," Garcia says.

At Miami, Garcia took care of the stuff that happens off the field. He oversaw recruiting, liaised team with university, directed the clinics and camps. He was the program's ambassador and plumber. And in all his dealings with stud recruits and crabby deans, Garcia couldn't rely on the stature and mystique that clings to former athletes. His football career lasted a few hours in high school. "I realized pretty early on I wasn't talented enough to play it."

He came to know the game as a boy growing up in South Florida. His family fled Cuba for Miami when he was six years old. For two years, his parents waited for the papers that allowed them to leave. The day after the plane landed, his mom and dad found factory work for minimum wage. He and his brother slept on floors until their parents took second jobs.

Baseball, Cuba's passion, never meant anything to him. Football, however, was love at first sight. "I just liked the game. I liked the speed of the game, and there's action on every play."

After having to repeat the first grade, young Pedro never looked back. His grades and test scores dropped jaws. He enrolled at the University of Miami and majored in business. Later, he was recruited by Eastern Airlines, where he worked as a ramp supervisor. The airline might have thought it was grooming an executive, but for Garcia, the job was temporary. "This is the only thing I've ever wanted in my life," he says of football.

At the urging of his wife, he applied for a job with the Miami Dolphins. Tom Heckert, just hired as the Dolphins' director of college scouting, called him in for an interview. "He sounded so enthusiastic," says Heckert, now the Dolphins' assistant director of pro personnel.

Garcia got the job. At first, his duties were largely clerical -- making name tags for the draft board and the like. But he regarded no task as too small. "I'd give him a list of 10 things to do, and they'd all be done, plus other things," Heckert says.

Soon, Heckert and his apprentice were breaking down film together. When the folks at the university called, looking for an assistant recruiting coordinator, Heckert recommended Garcia. "By the time he left, I knew he could evaluate talent."

He spent 10 years with the Hurricanes. As a recruiter, Garcia was furious for details. He kept files on ninth graders. He interviewed guidance counselors and church pastors. Browns defensive end Kenard Lang, who played at Miami, says Garcia learned his grandparents' names and showed up at his high school basketball games. Lang jokes that being recruited by Garcia was like being courted. "He sent me boxes of candy and flowers, told me how good I looked on film," Lang says. "I was kind of worried about him at first."

In 1995, the NCAA put the Hurricanes on three years' probation, after an investigation found that an academic advisor had funneled fraudulent Pell grants to players. Stripped of 31 scholarships, the team despaired for bodies. "We went back and looked through the manual to see what we could do," Garcia says. A kid didn't need a football scholarship to play football, Garcia and his staff realized. Star receiver Santana Moss, for instance, was brought in on a track scholarship. Browns receiver Andre King paid his own way with the money he made in five seasons of minor-league baseball.

King and Lang are two of seven former 'Canes on the Browns roster. Last season was not unlike Davis's first at Miami, the year the sanctions were handed down. Under the impaired guidance of Clark and Chris Palmer, the Browns misspent draft picks and free-agent money. "If you had a pulse and a uniform, you could make the team," Davis says.

The 2002 Browns are the chic choice to be this year's New England Patriots, a team that shoots from mediocrity to the Super Bowl. That's a reach, but the air of self-defeat has cleared over Berea, thanks in large part to Garcia and Davis. In a tribute to their scouting ability, five Hurricanes were taken in the first round of last year's draft. Of the Browns' draft selections, Garcia says, "We had either recruited them or played against them, and in some cases both."

One lesson Garcia learned at Miami is that talent evaluation is largely a what-you-see-is-what-you-get proposition. From his experience, players grow taller and wider, but not substantially better as people or performers. "There's a myth that players will change," he says.

He still keeps files on high school kids. All-America honors as well as arrests are noted. In the NFL, the most bureaucratic of all sports, such data- hoarding would seem to hold less value. The league collects and shares reams of player information with all teams. Draft prospects all but have their rumps slapped and teeth inspected at the winter combine.

Yet Garcia believes he can still work the margins. Sitting on a bench facing the practice field, he inches closer as he explains how, last year, the Browns coaching staff dispersed at the bye week and watched 47 players practice with their college teams. The idea was to see the kids in a natural setting, not a pageant show. "We don't want to lose the advantage we had when we got here."

He says he has no regrets about leaving Miami, which won a national championship as the Browns went 7-9. Nor has moving from Miami to Strongsville shocked his family. At spring break, he bought his wife and daughter tickets to fly back to South Florida. They declined. He says they appreciate Northeast Ohio's slower pace. "A simple example: You go to Home Depot, and you got five people waiting to help you out, then you got three cashiers open. In South Florida, there's nobody to help you, and you have to wait 20 minutes to pay for whatever you buy."

Customer service might be an odd way to measure quality of life, but Garcia specializes in the people arts. After morning practice, he had taken his parish priest through the locker room to meet players. Father Steve glowed like a 10-year-old.

Scene's visit ends with the ritual handshake and thank-yous. Then Garcia says, "Anything you need." His words couldn't sound more convincing.