Nachtmystium returns in a different shade of metal 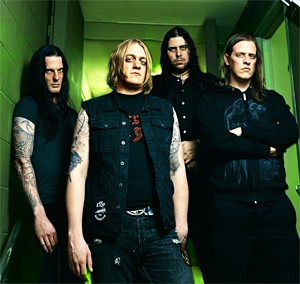 Black metal is a harsh mistress. Between the genre's reputation for attracting violent criminals and racists — like the murderers and church-burners who came with the pioneering National Socialist black metal scene in Norway — and its fans' intolerance for sonic innovation (particularly when that innovation takes the form of melody), you have to wonder why anyone would even want to be associated with it.

Let's not even get into the whole "corpse paint" thing, where grown men daub their faces like they're overly obsessive Kiss fans vying for a role in Ghosts of Mars. Plus, bands and fans alike sport leather-and-spikes ensembles that even Rob Halford would find excessive.

Chicago native Blake "Azentrius" Judd has been stretching the boundaries of this combative, alienating genre for years as leader of Nachtmystium. In the process, he's won a surprisingly diverse base of fans.

"Black metal is only limiting if you allow it to limit you," says Judd. "We do not feel that music that categorically would be deemed black metal has to fit some cookie-cutter mold. There's no freedom in that mentality. Herding and preconceived notions of what things should and shouldn't sound like, for any musician in any genre, are purely limitations and are a sign of weakness and fear of expanding upon one's own ideas and truly having an individualistic expression."

That attitude makes its way onto Nachtmystium's latest album, Assassins: Black Meddle Pt. 1, which earns its subtitle from the opening chords of "One of These Nights," a tribute to/rip-off of Pink Floyd's "One of These Days." The CD contains plenty of analog synths, psychedelic guitar effects, and beats other than the usual black-metal blast. And that's all before "Seasick," the three-part suite that wraps up the record and features Yakuza's Bruce Lamont on saxophone.

But Nachtmystium didn't always sound like this. Early albums like Demise and 2003's self-titled EP were minimalist and blasting, in the vein of Darkthrone and other pioneering Scandinavian acts. Beginning with 2004's Eulogy IV EP and the 2006 album Instinct: Decay, Judd began showing some affection for melody and a talent for sonic surprises, which moved him to the vanguard of the U.S. black-metal scene. He cites Pink Floyd and Hawkwind as major influences of this evolution. "I've recently become completely infatuated with Woven Hand and 16 Horsepower," he adds. "Musically, they're both rubbing off on me quite a bit. It was nice to find something more modern that really blew my mind."

Still, don't think that all those psychedelic flourishes and aural explorations have made Judd a studio whiz. "I know what I like, and I try to have similar results when creating my own music," he says. "I learn most of the sonic trickery in the studio from our engineers, who are selected for the very reason that they know old gear and traditional recording styles."

Assassins was produced by Sanford Parker, who's worked with a number of trippy, trance-y metal outfits, including Yakuza, Rwake, and his own group, Minsk. His organic approach and fondness for analog recording are natural complements to Judd's increasing sonic ambitions.

Yakuza has had some success reaching avant-garde (i.e., non-metal) fans, drawing attention and audiences with guest appearances by free-jazz performers, like drummers Hamid Drake and Michael Zerang and saxophonist Ken Vandermark. Judd not only admires this path; he hopes to follow it. "I think it's great that certain areas of extreme music have been able to grab the attention of your nontypical extreme-metal fans," he says. "I think this particular brand of music really needs a fresh crowd. It's good to see it happening for some bands and areas of the genre."

Over the past eight years, Judd has been bringing Nachtmystium's music to any audience he can reach. The band has snagged a reputation as a stellar live act — which is somewhat uncommon in extreme/underground metal, be it black, death, or otherwise. "I think that touring with dissimilar bands like Pelican, or any of the other handful of oddball bands we've toured with, has only helped us as performers," says Judd. "It's so much more of a challenge to play to an audience like that — especially one that really doesn't know who you are at all or what to expect.

"We've worked hard to challenge ourselves in the live environment," he continues. "To tour with other black- or death-metal bands is great and can be a lot of fun. But those crowds are easier — they know what they're in for, even if they don't know your band specifically. Whereas being out with a band like Genghis Tron, that's not so much the case. I find it much more rewarding to hold the attention of someone who's never seen or heard this kind of music."

Still, Judd continues to dance (or headbang, as the case may be) with the ones who brought him — even if he's not spending as much time on the dance floor with them these days. "Black metal will always be a part of our sound, no matter what," he says. "To try to block it out altogether would be stupid on our part. That's the foundation on which the band was built, and it's what comes naturally in certain parts and songs.

"But I don't feel that we're attached or unattached to anything 100 percent," he concludes. "We will always do exactly what it is we want to do with our sound. But black metal will always play a certain role. That's an element of the sound that brings some fire and intensity to the overall vibe of our records, and it comes instinctively."