Friday, January 18, at the Beachland Ballroom. 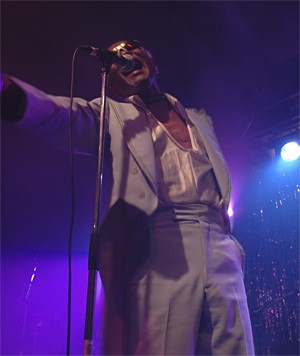 Nathaniel Mayer hails from Detroit, the city that turned white kids on to black music. The soul shouter recently crawled out from a pile of dusty, scratched-up 45s that bear the labels of record companies that are long forgotten by everyone but the most dedicated collectors. On his latest album, Why Don't You Give It to Me?, the sixtysomething Mayer makes another stand for the Motor City's storied musical legacy — this time with punk kids half his age.

The beginnings of Detroit's punk/soul aesthetic can be traced to the records Mayer cut for the Fortune label back in the early '60s. While many of these old sides employ the time-honored practice of lifting bits and pieces from other artists' hits, Mayer's over-the-top intensity usually obliterates such comparisons. A string of regional hits culminated in Mayer's lone national triumph, 1962's "Village of Love" — an exquisite piece of doo-wop-meets-do-rag that reached the R&B Top 10. The James Brown-influenced single "I Want Love and Affection (Not the House of Correction)," now considered an R&B classic, bombed when it was released in 1965, and Mayer gradually faded into obscurity.

In 2002, Mayer performed a buzzed-about concert in his hometown. It marked the start of his comeback. I Just Want to Be Held (from 2004) was a feisty hybrid of old-school soul and garage; in turn, last year's Why Don't You Give It to Me? was a transgenerational meltdown of the musical borders. Paired with members of the Dirtbombs, SSM, and the Black Keys, Mayer delivers each song in an aged, gravel-rough voice that merges with the band's relentless sonic assaults (think the Stooges or early Funkadelic). It's a long way from his formative soul sessions in the '60s.