Q: How will Sufjan Stevens write an album for every state? A: One great record at a time. 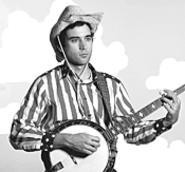 We want Sufjan Stevens to heal our fractured nation. And when his latest record, Illinois, starts up, we're convinced he can do it. His ensemble parades like a marching band, walloping the drums with gusto, while the brass and woodwinds cry as if we're about to win a war (or start one) and the choir sings like the prettiest schoolgirl voices that ever graced a state fair. The procession sparks a vision of an America that unites and moves forward, believing that every day will be brighter than the one before. Everybody sounds excited -- except Stevens.

The bandleader's soft falsetto seems almost shy as the confidence of the backing singers yields to Stevens' neutral tone. And right after the super-triumphant "Come on Feel the Illinoise," he's suddenly alone, singing a ballad in which he likens himself to . . . killer John Wayne Gacy Jr. What happened to the parade?

Sufjan (pronounced "Soof-yan"), who studied creative writing at the New School in New York, is best known as a sensitive lyricist and musically omnivorous songwriter. His first two records, 2000's folk/indie A Sun Came and 2001's experimental Enjoy Your Rabbit, made a minor splash, but in 2003 he released Michigan, a poignant album about his home state that combined soft ballads with intricate, layered arrangements; you could liken it to a benefit concert for Flint thrown by Steve Reich and Simon & Garfunkel.

Michigan made Stevens an indie celebrity, and he announced that he would continue to the other 49 states, starting with Illinois -- a quick hop away from his home state, but a place that he says he was not familiar with before he started the project. His choice "had a lot to do with my perception of Illinois generally as being robust and vigorous, and a great historical summary of American capitalism in some ways," he explains on the phone from his home in Brooklyn.

Stevens researched the project by "scrounging around for details and for the inside story." He read stacks of books, from Carl Sandburg and Saul Bellow to academic studies of frontier life, and he solicited ideas and anecdotes from his friends in the state. "Everybody wanted me to write about their flower festival or their hog-queen pageant," he says. "Or the 4-H Club."

Some of the references are homey and local, and others are steeped in history. Stevens, however, doesn't try to be topical, which saves him from looking for a rhyme for Barack Obama, and which also gives the album the feel of earlier American lit, like that of John Dos Passos or Upton Sinclair. And unlike the more personal Michigan, much of Illinois feels larger than life -- with an ensemble of characters that includes Abraham Lincoln and Superman.

Aside from the choir and the string quartet, almost all the music is overdubbed, and Stevens plays more than 20 instruments himself -- from glockenspiel and woodwinds to banjo and piano.

The final result is lush and orchestral: Instrumental segues and flourishes connect the songs; long titles -- like "Concerning the UFO Sighting Near Highland, Illinois" -- name places as if to thumbtack the tunes to a map of the state. Yet in spite of its complexity, the record sounds spontaneous. "I usually write the parts out," Stevens says, "give them to the musician, who learns them immediately, and then we record it immediately. I don't leave any time for refinement, because I like the sense of surprise and unease in the first take."

That unease suits a project of such mammoth ambition. As he writes about an entire state, and ultimately the rest of America, Stevens still struggles to find a balance between the big picture and the individual stories; Illinois works from both the top down -- in the state's myths, cities, and frontier past -- and the bottom up, through the characters lost in the middle, like the woman dying of cancer in "Casimir Pulaski Day."

"I don't want to compromise the personal narrative for the overarching abstract generalizations about the United States as a whole," Stevens explains. "That's a real conflict in my vision. I think sometimes [Illinois] is a little unbalanced, where its affiliation with Illinois historically is compromised for the sake of the stories. And I think it's better to do that, anyway. I'm more comfortable with storytelling than I am with history or politics."

While Stevens weaves controversial events throughout the album, he never strips the facts down to a slogan. "If you're singing about war and whatever, George Bush, and your disdain for capitalism, and you're very angry about it, and the lyrics are really deprecating . . . I think it's a little clumsy," he says. "It's so obvious that it becomes a caricature."

Stevens will never claim that he's making the Great American Indie Rock Album or following in the footsteps of the many artists who have chronicled America -- especially those who did so not by sticking to a narrow perspective, hiding behind irony, or glossing over our flaws, but by embracing this strange, awesome nation that ties us together. He's conflicted -- or at least painfully modest -- about his plans: Even though it was his idea to cycle his albums around the 50 states, he sometimes implies that it's as arbitrary as using the days of the week, and he's dismissed the project as a "ridiculous proposition." He also says that the next albums, Oregon and Rhode Island, "will have nothing to do with actual place names and histories. They'll be more abstract or more figurative."

But no matter where Stevens takes the project, he's honed a vision for Illinois that's inclusive and panoramic: The breadth of his research and the pull of his music make it a transcendent portrayal of this boxy midwestern slice of America. The march of history and the City of Big Shoulders don't dwarf his characters so much as batter them and sweep them along, and he's pulling us into that parade -- to walk beside capitalists, killers, Superman, and every one of the rest of the people of Illinois.