Ness Is a Mess

Cleveland Play House's latest extravaganza is a show only a mother could love. 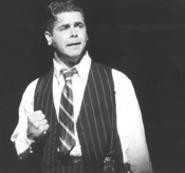 For those cynical rogues who keep scrapbooks chronicling great lapses in human taste, Eliot Ness in Cleveland is a treasure trove. This musical about a serial killer and the famous G-man even resorts to a decapitated head on a pile of body parts, which comes to life to crack witticisms about his slaughter. And in the manner of distorting history, it reaches its apogee with a wisecracking Al Capone offering Freudian advice to a nervous Ness, who can't decide whether he's a superhero or a basket case. All this is set to a score so stale you can detect the scent of mold emanating from the orchestra.

Here is a show so clumsy in style, tone, and mood that it elicits a vision of a performing pachyderm, frantically jitterbugging for peanuts. Rumor has it that Broadway impresario Hal Prince gave this aberration his seal of approval. One can imagine the madcap Prince giving a mischievous wink to his henchmen while advocating this musical whoopee cushion for Cleveland consumption.

Not since the Cleveland Play House commenced the reign of artistic director Josephine Abady with a stage rape of the film classic On the Waterfront (featuring a dozen plastic pigeons and two dozen plastic performers) have denizens of Northeast Ohio been privy to such spectacular wrongheadedness.

With a book by Peter Ullian and score by Robert Lindsey Nassif, this could serve as an ideal specimen in an exhibit on the death of the American musical. Some of its filched highlights include dumb cops doing Guys and Dolls jive talk, jaded citizens in a kick line imitating Chicago's razzle-dazzle cynicism, and pugnacious Annie hoboes fervently singing "There's Always Tomorrow." Most painfully, there is a fake Camelot uplift, with a defeated Ness seeking solace from an admiring newsboy. It all adds up to an evening more resembling a taxidermist's stitching together of leftover body parts than to either inspiration or imagination.

The evening's sins are not the excusable ones of community theater. The cast is the best that money can buy: There is no frayed vibrato on display, no ossified ham chewing on the scenery or clumsy heifer tapping up a storm. The Play House has blown the budget on a musical work that should have stayed locked in a dusty file cabinet.

Cast and director have been shipped in wholesale from the Broadway holy land. The cast members are varnished in a hard-edged professionalism. All splendid performers, they dance with fawnlike agility and are imbued with powerful idiosyncratic singing voices. Given half a chance, any of them could garner a Tony, make a dazzling toothpaste commercial, or do a sizzling revival of Hello, Dolly! Here, they are asked to do the impossible: namely, to instill life and vitality into a stillborn conception.

Burke Moses as Ness projects the virile, brooding good looks of a G.I. Joe. He has a voice capable of bringing glory to the works of Broadway's finest tunesmiths and a sexual glow to light any of Tennessee Williams's steamy studs. But here, asked to play an Untouchable who fluctuates from Dick Tracy bravado to neurotic nonentity, he is unable to make sense as historical figure, musical leading man, or cartoon. Poor Moses in his snazzy trench coat is left looking forlorn, waiting to be rescued.

Yet Burke's Ness is a veritable Hamlet next to the role of girl reporter Hildy Lincoln, a part lifted and bleached from Rosalind Russell's intrepid newspaperwoman in His Girl Friday. Alison Fraser performs with the cheerful, chipper bravery of a Girl Scout in perhaps the worst role ever written for a leading lady. The audience feels compelled to buy all her cookies for having to sing "Why Can't We Be Human?" -- a song so repellent to human ears, we suspect it may have been written by vengeful extraterrestrials.

Like the slaves of Pharaoh, the whole cast is held in bondage, forced by evil taskmasters with delusions of a Broadway run to perform unnatural acts. Melodic, winsome Polly Penn must do a crazed Mother Hubbard number, screaming for social justice. Ray DeMattis is trapped as a mad Joe Pesci imitator who thinks he's Al Capone. Jay Stuart enacts a millionaire dastard as a communist propaganda piece.

In perhaps the most grievous offense against human decency, one Barry Finkel portrays a victim of the notorious torso killer, who, before meeting his demise, must give a lecture concerning men who have a sexual predilection for poultry. As anyone who has ever whistled "Springtime for Hitler" knows, any offense against good taste is made defensible or forgivable by wit; here, nothing is forgivable. We can only hope that the cast can take comfort for damages done by remembering the old adage: "Take the money and run!"

Director David Esbjornson is an up-and-coming Broadway glamour boy; his credits take up half a page. He manages to grease the slides so effectively that Ness and friends' descent into hell is so quick and efficient, we're halfway to the bar before we realize that Thanksgiving has been rendered superfluous by this encounter with the biggest turkey one could possibly imagine.