A transplanted Clevelander brings back the rock. 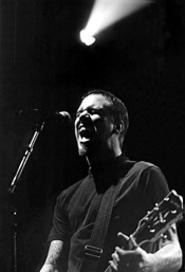 A little over a year after leaving Cleveland for Los Angeles, former Disengage guitarist Mike Callahan is back in town, and he's brought his new home with him. "That's really my house," Callahan says of the grumbling red-and-silver tour bus parked in front of the Odeon.

"We just got off a run of seven shows in a row -- yesterday was our first day off -- now we're doing another seven in a row," sighs Callahan, who's been on tour with his new outfit, fast-rising Earshot, virtually nonstop since November. "But I'm not complaining."

Nor should he be. The roadwork is paying off. Currently ensconced in the Billboard Top 200, Earshot's sleek, sinewy debut, Letting Go, is a burgeoning hit. Propelled by "Get Away," the Tool-esque single that's hitting radio nationwide and has been a steady Top 10 hit on Cleveland's 92.3 Xtreme Radio, the album has landed Earshot tours with Static-X and Kid Rock, as well as a slot on this summer's anticipated Locobazooka Tour, which also features Filter, Sevendust, and Mushroomhead.

"There's so many new artists coming out with new records that with Earshot to have sold 47,000 pieces already -- and 1,200 here in Cleveland -- is just amazing," says Bill Peters, a regional sales rep for Warner Bros., Earshot's label. "It's No. 148 on the chart, and we're ecstatic with the reaction."

The reaction is wild on this Wednesday night. Close to 400 people crowd the Odeon floor as Earshot takes the stage for its first headlining gig in Cleveland. As the band opens its set, ladies holler for handsome singer Will Martin, who could pass for an underwear model, while Callahan rocks back on his heels, occasionally jerking forward with a shock of energy, as if his Gibson were a downed power line. The sound that spills forth is dark and fevered, built on forceful melody, slobbering guitar, and buckets of sweat. When the band plays "Get Away" near the end of the show, the audience's pipes rival the PA's volume. As the band finishes, some of the ladies look as if they could use a cigarette. Clearly, Callahan has arrived.

Still, despite the early success with Earshot, he fondly recalls his days in Disengage. He co-founded the band in Kent in 1994 and, as a primary songwriter, helped develop the group into one of the most explosive rock bands around.

"I think for a long time I had put that group ahead of everything else -- and that's the way it should be. When you're in a band, that comes first. But I came to a point in my life where I felt I needed to do what was best for me personally," Callahan says. "I didn't intentionally mean to disrespect or hurt anyone else's feelings at all. I just needed to do what I felt was right, and sometimes it might seem like it's a selfish thing to do, but I had to do it."

Upon relocating to the West Coast -- yes, he does also have a place without wheels -- Callahan hooked up with Earshot in a matter of weeks. Prior to his move, he had already developed a friendship with Martin, whom he had met nearly three years earlier, and Earshot happened to need a second guitarist for its Letting Go recording sessions late last summer. Callahan got to play, and clearly, his tasteful, muscular chops help round out the band's sound, a slick blend of brains and brawn.

"You can say that it's cerebral and that it's thinking a bit -- and it is intelligent -- but not so much so that it stays on an underground level," Callahan says. "There's still the importance of writing a song with a hook that people can sing along and feel something from. There's an art to that."

It's an art that Earshot seemingly has mastered, and the band is reaping the rewards accordingly. But despite the thrill of being in a group on the rise, low-key Callahan is still adjusting to life in the limelight -- particularly the glare of Hollywood.

"In the Midwest, there's just a lot more real, working-class people," he says. "Not that there aren't those on the West Coast, but just being around Hollywood and Los Angeles and that whole scene, of course there's going to be a lot of glitz and glamour, and that part of it is a little weird."

Kind of like having a home with windshield wipers.