Yo La Tengo, Saturday, December 29, at the Beachland Ballroom

The Isley Brothers, Sunday, December 30, at the Palace Theatre 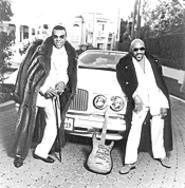 Billy PriceOne evening at the White Birch Inn in Spring Valley, New York, a New Jersey teenager named William Pollak became Billy Price, taking his nom de guerre from bluesman Lloyd Price. Need you now ask, 35 years later, where Pollak/Price's musical sentiments reside? Price took to the stage that amateur night and knocked them dead with a rendition of Ben E. King's "Stand by Me," and has been slaying audiences ever since with his white-boy soul and rhythm & blues that draw favorable comparisons to Southside Johnny Lyon (also from New Jersey) and Hall & Oates (from nearby Philadelphia). Having made his home in Pittsburgh since leaving Penn State University in '71, Price has a résumé that includes vocals on two albums by guitar legend Roy Buchanan and three while fronting his own Keystone Rhythm Kings from 1978-'90. Price took a detour on his first solo album after the demise of the KRK, forsaking soul for the jump blues of Percy Mayfield, T-Bone Walker, etc. on Danger Zone. He returned to his first love in 1997 with The Soul Collection, a gathering of songs originally done by underappreciated soul masters like O.V. Wright, Otis Clay, and Eddie Hinton. His 1999 follow-up, Can I Change My Mind, includes the song of the same name made famous by Tyrone Davis in '68 and reintroduced in '74 by Price on Buchanan's Livestock album. It's proof positive that, three and a half decades after borrowing another legend's name, Price has finally made one for himself.
-- Steve Byrne

Yo La TengoThe indie pride of Hoboken, New Jersey, Yo La Tengo is populated by three rock mensches -- knowing, thoughtful, skilled music lifers, as consistently full of surprises as they are consistently steady. Beautiful case in point: their recently completed hometown Hannukahpalooza stand, which featured different musical guests and different set lists every night, and which sold out for a week straight. And the reason why Ira, Georgia, and James matter, when many of their indie-rock contemporaries no longer do? Because they know the secret of every great community band: Representing, energizing, and serving their peeps is a must.

At times, they do so with junior-league noise excursions (of the Sonic Youth variety), at times with fragile folk-rock tunes about relationships that need not go awry (of the Dinosaur/Fields/Rev variety), at times with a sheer sense of the moment (expect holiday cheer of one manner or other). They know their catalog as well as they know their audience, and unlike just about every other rock band on the planet, they've grown better at being a band as both their audience and catalog have grown.

So you can be pretty sure that the Beachland will be packed -- most likely with people who know your name or whose record collections you'd admire. You'll drink a few beers together, tell some stories, and listen to some others. You'll smile at the randomness of the band's T-Rex or disco cover that'll sound incredibly sweet (sweeter than you remember the original sounding) or at the guitar-organ feedback drone-fest that'll get heady and intense for a couple of minutes. And you won't regret you went, not for a single post-holiday-depression minute, because the mensches of Yo La Tengo care as much as you do.
-- Piotr Orlov

Ja RuleJa Rule's greatest accomplishment isn't lodging two No. 1 albums on the Billboard charts in successive years or moving over five million records; it's being the first person to ever make Jennifer Lopez's singing sound good by comparison. C'mon, admit it, we all thought that Lopez was really only in the spotlight because of her prodigious backside and dresses that leave little to the imagination. But on her latest single, "I'm Real," which features Rule on backing vox, Lopez sounds like Billie Holiday next to the sandpaper-voiced rapper.

But if Rule's delivery lacks range, thankfully, his emotions aren't as limited. Once dismissed as a DMX clone, Rule has since made a name for himself as a rugged wordsmith with the emotional breadth that X lacks. Spiking his gritty ghetto hymnals with touches of sweet, surprisingly sentimental soul and R&B, Rule is among the most dynamic of hardcore MCs. This is key, as perhaps the most tiresome aspect of rap is the constant posturing by many of its leading artists, from Nas to Trick Daddy. It's as if these acts fear that dispensing with the nut-grabbing for even an instant will somehow undermine their exaggerated manhood -- the perpetuation of which is key to survival in the 'hood. But by letting his guard down a bit, by rhyming about love, betrayal, and hurt, Rule demonstrates that you can shed a tear and still be a man. Maybe even more of a man. Now that's a feat almost as impressive as making J. Lo listenable.
-- Bracelin

The Isley Brothers When the big book of rock and roll is finally written, Cincinnati's incredible Isley Brothers will require a lengthy chapter all to themselves. Boasting hits across six decades and long associated with some of the biggest names in the music industry (they've been covered by the Beatles and Rod Stewart, and hired then-unknowns Jimi Hendrix and Elton John for their touring bands in the '60s), the Isleys have created a stunning legacy that includes 23 gold and platinum albums, an amazing string of R&B and pop hits, their 1992 induction into the Rock and Roll Hall of Fame, and a songbook that includes some of the most recognizable titles on the planet ("Shout," "Twist and Shout," "It's Your Thing," "Who's That Lady," "Fight the Power").

There could be no more fitting celebration of the Isley Brothers' 40th anniversary than the incredible success of their latest No. 1 album, the star-studded Eternal. With a lineup of collaborators that includes R. Kelly, Jill Scott, Jimmy Jam and Terry Lewis, Raphael Saadiq, Avant, Steve Huff, and Angela Winbush (wife of original Isley Brother Ronald), Eternal has a smooth sonic thump that recalls the Isleys' rich heritage while remaining completely fresh and relevant. Throughout the group's 40-plus-year history, Ronald Isley has always found the formula to keep the Isleys at the forefront of contemporary music without sounding trendy or forced. The Isley Brothers have succeeded consistently since 1959, with an undeniable facility for hearing whatever is happening at the moment and filtering it through their own unmistakable talents. That's their thing.
-- Brian Baker