Niko Bellic and Grand Theft Auto IV are great, but is that enough anymore? 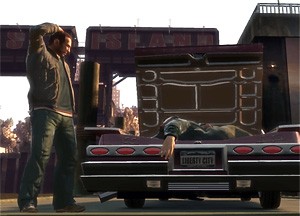 If you read reviews the way I do, you've already started by checking out the score, and now you're back here to see what the hell my problem is. Peace, brother. Grand Theft Auto IV is a fine game, with tons of content and all the great moments you've come to expect from the series, from high-speed freeway chases against traffic to hookers that come with a GTA-patented, baseball-bat-assisted money-back guarantee. The story is engaging, the city detailed and massive, and the game's lead — Slavic refugee Niko Bellic — finally solves the riddle of what Boris Badenov would sound like getting a blowjob.

So why haven't we rubber-stamped it with a perfect score, as every other outlet in the galaxy has? Are you looking for an answer, other than It doesn't deserve it?

If you've been faithful to the series, resisting tawdry flings with Saints Row or moonlit nights spent prancing across the skyline in Crackdown (or even a day at the mall with Dead Rising), GTA4 seems a revelation, a huge advancement of the genre, deserving of all the gushing praise it's received. But if you have dabbled with those others, GTA4 stands out as the first in the series to feel a bit stale, suffering in comparison to rivals that, till now, merely nipped at GTA's heels.

Take the driving. Accelerating in GTA4 feels like you're about to take off in an airplane, the car feeling lighter and lighter until even the slightest bump sends you skipping across the asphalt like you're driving a moon buggy. With handling that squirrelly, every mission that involves chasing a fleeing car or operating within a time limit becomes pure, distilled antifun. Eventually you learn to make the best of it, but Crackdown, Saints Row, Test Drive, and now even Burnout proved that open-world driving doesn't have to suck. Why not GTA?

Or take the gunplay. Rockstar continually makes unimaginative, sloppy "improvements" to GTA's aiming system, only to net more criticism each time. With GTA4, they've thrown up their hands with the laziest solution of all: autotargeting across the board. And even this is a headache, since you'll often autotarget enemies that are either dead or dying, in favor of very live enemies tearing your body to shreds with a shotgun. Crackdown, Mercenaries, and Saints Row use standard third-person shooter controls for their gunplay, and it works perfectly. Why not GTA?

Hell, take the walking. Niko's default stride is a window-shopping amble, just slow enough to be useless. Hold a button while walking and he runs; jam on the button and he sprints. It's a perfect example of Rockstar's convoluted, overly complicated approach to game play. Isn't this why we invented analog controls? Now compare Niko to the nimble-footed agents in Crackdown. Why not GTA?

Then there are the quirks and glitches: cars and people (including Niko) getting stuck in the environment, broken missions, cops materializing out of thin air, cell-phone conversations that invariably lead you straight to the police . . . The list goes on.

Almost none of these woes are new to GTA, yet seven years later, Rockstar has stubbornly refused to address them. Now that other games are improving, GTA's continued shortcomings have become harder to excuse.

Perhaps that's being critical. Or maybe it's just being a critic, which sometimes means pointing out that the hooligan has no clothes.