In Their Darkened Shrines (Relapse) 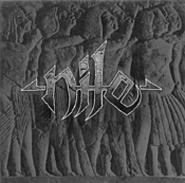 Every last conceit that makes heavy metal both goofy and great is encapsulated on Nile's fourth full-length, the colossal In Their Darkened Shrines. Sure, it may be hard for those who can't recite Brendan Fraser's lines in The Mummy from memory to suppress chuckles at these guys' preoccupation with Egyptian mythology, which leads them to name-drop ancient gods, dub their sound "Ithyphallic Metal" -- a designation almost as dorky as Manowar's loincloths -- and most inexcusably, speaketh in Olde English from time to time.

But all this juvenilia is balanced by death metal at its most technically vigorous. Majestic and malevolent, "Unas Slayer of the Gods," Darkened's 11-and-a-half-minute centerpiece, is almost operatic in its stateliness, as layers of mach-3 guitars, algebraic drumming, and sandblasted vocals morph into an ominous death march, complete with a spoken-word monologue that sounds like Vincent Price dislodging a chicken bone from his windpipe. What further distances this band from most of its counterparts is the fact that much of this disc is more funereal than frenzied, with haunting incantations like "I Whisper in the Ear of the Dead" and the regal "Hall of Saurian Entombment," which add Gregorian chants, chimes, and Old World percussion to Nile's lethal charge. It all makes Darkened a disc that will be hard to top as 2002's finest metal offering.