Trent Reznor Discusses Life Without The Backing Of A Major Label 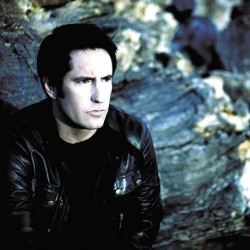 What a difference sobriety makes. Throughout the '90s, Nine Inch Nails frontman Trent Reznor lived a tumultuous life. His industrial rock band was hugely popular, but he didn't do many interviews and engaged in very public feuds with everyone from Marilyn Manson to Courtney Love. It took five years for NIN to follow up 1994's groundbreaking The Downward Spiral with 1999's The Fragile, a quieter album that didn't satiate his fans' need for noise. Turns out all that erratic behavior had an explanation. Reznor was battling drug and alcohol addiction.

But since cleaning up a few years back, Reznor is a different person, mentally and physically. The guy's beefed up his once-slender frame after hitting the gym and has even become active, issuing With Teeth in 2005 and following it up with Year Zero in 2007. He's quickly returned this year to release two albums: Ghosts I-IV and The Slip. Hell, these days you could even call him prolific.

"A huge change in my life was being sober," the 43-year-old singer explains during a phone interview from the tour's start at what he calls "a nature wonderland" in Pemberton, British Columbia. "A lot of what governed me to that point was fear. I was afraid that nothing was good enough. It was just a bunch of bullshit, really. Trappings of a scared kid who was afraid to sit down and do work. With that change and the collapse of the record business and the fact that I'm getting older and realizing I'm an adult now - those became motivators to enjoy the moment. I'm now grateful to be able to do what I'm able to do and not just bitching about it. I want to take advantage of the cards that have been dealt."

Born in Mercer, Pennsylvania, Reznor lived in Cleveland for about eight years and started NIN here in 1988, leaving behind the Exotic Birds, a New Wave act in which he played keyboards. NIN recorded its debut, 1989's Pretty Hate Machine, here in town. But when the band returned to the city after a national tour to find the locals had turned against it, Reznor figured it was time to leave.

"When I left, I'd had enough," he says. "I was ready for a change of scene. We were born [in Cleveland] and rehearsed in the Phantasy and played with a handful of other original bands that came from that scene. Our approach to get signed was unique. It wasn't just play out and hope that someone sees you. It was really a strategic plan of working on music first and trying to get it in the hands of the right people. When we did get signed and got attention, I thought the interest and light on Cleveland might be something like, 'There's cool shit happening there.' But I came back from a year of touring and everybody hated us. There was bitterness and this feeling of 'You didn't deserve that.' I was like, 'See you later.' In hindsight, there are things I miss. I think fondly back on the time I spent cleaning toilets there, certainly."

Reznor did move on to bigger and better things. The Downward Spiral became NIN's top-selling album and brought industrial rock into the mainstream. It also gave Reznor carte blanche when it came to dealing with Interscope Records, the label to which he was signed. He was able to form his own imprint, appropriately called Nothing Records, and sign like-minded acts. The most notable act to record for Nothing was Marilyn Manson, but Reznor also signed electronica acts such as Squarepusher and Autechre through a distribution deal with the U.K.-based Warp Records.

"What I was trying to do was create a safe haven," he says of Nothing Records. "Nine Inch Nails had been fortunate. We had made music that had integrity and yet found a broad audience that had made labels money. When they left me alone to do my own thing, I was hoping that the idea was that [Nothing] would be a barrier between the label and the artists. It did work in the case of Marilyn Manson. Initially, everyone was afraid of what he was. I believed in it. Then when they saw it could work, they did too." While that worked for Manson, it didn't work so well for the other artists on his label.

"The other stuff, nobody at Interscope, who was really putting it out, gave a shit about," he says. "And we didn't have the resources to fight the fight that the bands we licensed needed. I realized that running a record label is not what I do. The idea and ambition was noble, but the execution was ultimately flawed and ultimately futile."

As a way of circumventing Interscope, with whom Reznor recently parted ways, NIN took to the web. It released both Ghosts and The Slip online, making The Slip available as a free download. More than one million fans responded, downloading the album, which eventually was issued in CD and vinyl form.

"Well, I don't know if that will be the business model of everything in the future," Reznor says of the free download. "We had just released Ghosts a couple of months earlier and just put tickets for the summer sale on tour. I really didn't want to make it seem like I'm hijacking people for every scrap of cash they have. That's the thing. I'm looking at Nine Inch Nails as a whole entity. That's not something you could do when you were on a major label. When we were on a label, your record business is one thing, your touring business is one thing and your merch business is another. Now it's just all one pot, really."

With the ragged, lurching guitars and muffled vocals of songs such as "1,000,000" and "Head Down," The Slip represents a side of Reznor that we haven't seen much. Namely, someone who can go into the studio and crank out material without obsessing over every little detail.

"I got off tour last summer or fall," he says. "I really, really felt like making music and being creative. I wanted to do something immediate. Rather than looking at something like a year-long project that was like Ghosts, I wanted to do something different. I called up [producer] Alan Moulder, who was free, and just said, 'Come over here and whatever we do, whatever we finish, let's release if it's any good.' I thought it might be nice to have a single or something. Before I knew it, I had an EP. And then there was a whole album done. It's scary because I'm used to having the luxury to go back and edit and think about things. It felt good to me. It felt like things were flowing. I wanted to try it this way. Looking back, there are things that I would do differently. But I'm proud of it. I don't know if that's how the next thing will be."

Despite the fact that he no longer has the backing of a major label, Reznor's held nothing back when it comes to the production of the live show. With multiple video screens and a series of scrims and backdrops that make it appear as if the band is playing in a giant cage, the light show is intense - even by NIN standards.

"It is the most ambitious thing I've been able to do," admits Reznor. "It's big, but I don't know how to describe it. This tour started at the end of last year. I said, 'This is what I would like to do. Can we economically make it make sense?' Somebody sat down and did the numbers and said, 'Yeah, you can.' So here it is. It's based upon the idea of simply trying to provide an environment where this music sounds the best it can sound. We play bits from the new record, Ghosts and old stuff. Nine Inch Nails is not just loud and shit-breaking but also very gentle. Some of that influence comes from the Bridge School benefit I played with Neil Young. I tried to set the stage for an exciting tour for us to play. It's been an incredible hassle, but it has the potential to be amazing."