A man's bare chest is too racy for Walgreens. 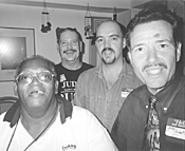 When Calvin Johnson photographed merrymakers at a Fourth of July party hosted by gay activist-businessman-philanthropist Gregg Ammell and his partner, David Laws, Johnson had no idea it would be the last of the couple's fabulous parties.

After the funeral, Johnson picked up the film he'd dropped off at a Lakewood Walgreens. Ammell's large back yard was full of sun that sweltering afternoon. In the midst of the party, he stepped onto the veranda to make a toast, wearing nothing but shorts and a nipple piercing. He seemed healthy and happy -- Johnson wanted to remember him that way. Thankfully, he had photographed the moment.

But when he retrieved his pictures, the photo wasn't there. Nor were any of his negatives, he says.

Johnson, 69, knew the picture had turned out, since the rest of the roll looked fine. But he was too consumed with grief to dwell on the mystery, so he put it out of his mind.

Six months later, he was talking with friends about the Super Bowl and Janet Jackson's "costume malfunction." He wondered aloud why everyone was so offended by what was, in the end, just a nipple. Then it occurred to him: Someone at Walgreens may have been offended by Ammell's pierced chest.

When he returned to store, Doug Griffin, assistant manager of the Detroit Avenue Walgreens, told him about a "law" that says film developers are under no obligation to print photos they deem offensive. "If someone does not approve of the subject matter," Griffin later scribbled in a note to Johnson, "each employee has the right as they see fit."

In fact, no such law exists, but this would be an accurate summary of Walgreens' corporate policy.

Thanks to pressure from conservative groups like the American Family Association, Walgreens has flip-flopped on its photo policy for the past two years. According to AFA chief counsel Stephen Crampton, Walgreens used to develop all film dropped off at its in-store labs. Nudity and sex between consulting adults were considered free expression.

The liberal attitude annoyed the AFA, so the group ventured to Deerfield, Illinois, in February 2003 to meet with Walgreens executives on behalf of an employee who supposedly had been fired for refusing to develop pictures of naked people. Walgreens told them they were mistaken. The employee was laid off because the store had simply overhired; it would not be changing its photo policy.

"Walgreens says it will continue the practice of developing pictures depicting nudity and sexual acts, including bestiality, in one-hour photo store labs," the article said. It went on to denounce the company for creating a hostile work environment for people opposed to "pornographic pictures."

Company spokeswoman Carol Hively refuses to discuss AFA's influence on the chain. But Walgreens' policy definitely changed. Deciding what's obscene and what isn't is now left to the person operating the photo-finishing equipment. If a worker is offended by a negative, the photo need not be developed -- meaning something as commonplace as a shirtless man with a piercing could be ruled perverse.

The AFA is still not happy, though. It would rather see Walgreens adopt a policy more akin to Wal-Mart's.

There's no ambiguity at the big-box behemoth. Wal-Mart spokeswoman Dinett Thompson says that instead of submitting a customer's negatives to the subjective judgment of employees, its photo-processing policy is sweeping: no nudity, nowhere, nohow.

Meijer takes a more extreme stance: It actually rats its customers out. Managers at the Michigan-based chain, which has 30 stores in Ohio, are under instructions to call the police if they come across "any photographs containing nudity."

Even a new bride, naked in the garden? Scene asked spokesman John Zimmerman.

"Calling the police," he replies.

A pair of kids in the bathtub, making shampoo horns with their hair?

CVS, Eckerds, and Rite-Aid have ambiguous policies that mirror Walgreens' -- decisions are left to employees. Which means that if you're shooting photos at the beach this summer, whether they get printed or not is strictly the luck of the draw.

Johnson doesn't understand how anyone could be offended by his photo of Ammell. He doesn't even care, really. He just knows that he lost a friend, and now his best photograph is only in his head.