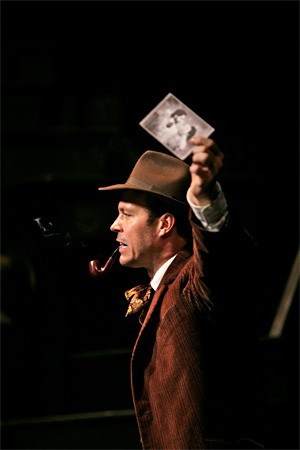 Imagine meeting someone on a date and having him accurately determine telling details of your character and your recent activities, just by glancing at you. It would be quite impressive and more than a little creepy — which may explain why Sherlock Holmes never scored with chicks like those other fictional detectives always did.

No, this all-knowing creation of Sir Arthur Conan Doyle evidently contented himself with a calabash pipe jammed with exotic weed and a needle full of cocaine. But in Sherlock Holmes: The Final Adventure, now at the Play House, we see the aloof Holmes turned into a giddy schoolboy by an almost equally clever woman. This may give purists the shakes, but it makes for a delightful if unsubstantial evening of theater.

Few fictional characters are as readily identifiable by their accessories — a magnifying glass, pipe, and a deerstalker cap — as Sherlock, the wizard of Baker Street. But it is Holmes' fertile brain that continues to entrance, so many decades after Doyle penned his last story about this consulting detective who could bring almost any villain to heel.

In this Holmesian collage assembled by Steven Dietz, we see bits and pieces of the sleuth from various sources. It is based on an 1899 play by Doyle and William Gillette, and also mixes in plot points and characters from serialized adventures such as A Scandal in Bohemia, The Final Problem, and The Adventure of the Empty House.

Holmes is lured into taking a new case by the king of Bohemia, who wants the detective to protect his scheduled marriage from a scandal that could be perpetrated by singer Irene Adler, with whom the king had recently shacked up. Apparently there was a photo taken of the king and Irene sharing a balcony in mid-swoon, and this could cause all Eastern Europe to crumble if it came to light.

The skulduggery thickens as the evil Professor Moriarty (a glowering Timothy Crowe) shows up, manipulating his henchmen to finally wipe out Holmes. Though this "Napoleon of crime" appeared in only two of the Holmes stories, he became the ultimate nemesis and is a welcome (if sadly underwritten) addition here.

Placed on a brooding black-on-black set designed by Rob Koharchik, this production is highlighted by Christian Kohn, who fashions a more contemporary but still thoroughly believable Holmes. Rumpled and woozy from too many encounters with his hypodermic, he is a far cry from the stern and stately detective as played by Basil Rathbone in the World War II-era movies.

Padding around his 221b Baker Street flat in robe and slippers, filing important papers by stabbing them into the mantel with a dagger, Kohn's Sherlock is more of a loose cannon. But the brain is as sharp as ever, as he proves early on with one of his signature profiles of his companion, Dr. Watson — right down to deducing that Watson has recently moved his dressing table (the good doctor's usually poorly shaved face is now poorly shaved on the opposite side).

Donning one of his famous disguises, Sherlock tries to nab the king's photo by visiting the house where Irene is staying. But she sees through his clergyman ruse faster than you can say cheesy wig. The game is afoot.

Although there's not much for him to do except follow Holmes around and carry stuff, Nick Berg Barnes as Dr. Watson is as loyal and obedient as a well-trained golden retriever — though you do wonder why his patients would put up with his jaunting off to far-flung destinations alongside his nose-candy buddy at a moment's notice. Krista Hoeppner adds some dash as Irene, standing up to Sherlock and reducing him to a stammering heap as he flails about, trying to make romantic small talk.

While some may be put off by the humorous elements in this adaptation, Dietz snares some lovely Sherlock quotes. Referring to the king's butchering of the language, Holmes says, "Only a German could be so uncourteous to his verbs." And when he explains one of his more elaborate scams, set up to get him invited inside Irene's house, he sagely observes that "it takes enormous planning to produce a random event."

Director Tim Ocel has his cast overact just enough, without pushing the entire enterprise into farce, resulting in a production that feels like an agreeable SparkNotes summary of the entire Holmes canon. So what if that canon, in this telling, emits a less-than-deafening boom?