Dion DeSantis leads the Festival of Fury into its fourth year. 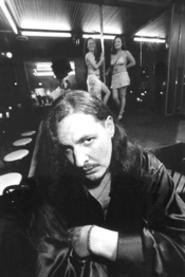 "I love this place," says Dion DeSantis, while relaxing one afternoon at the Silver Fox, a strip club in Tremont that he frequents. Ever since he enlisted some of the Silver Fox dancers to perform with Biaxadent, the local metal band he fronts, at a Kid Rock aftershow party at Peabody's, he's been a regular at the joint.

"I don't know why I get along so well with strippers," DeSantis says afterward, driving through downtown Cleveland in a battered green Cutlass that stalls at all the stoplights. "I guess it's because I tell the truth and I'm honest, you know. I'm not about telling them I love them to get laid. I tell them straight out that I got a little dick and it's hard as Chinese algebra. I tell them how it is, and it's the same thing with everything else -- even my friends in my band."

That DeSantis, who's an imposing six feet, four inches tall and has long black hair he often wears tied back, has little regard for etiquette is evident in more ways than one. He's had well-publicized run-ins with several of the major players on the local metal scene, and as a result he started a management company so that he can book his own shows. But even though his band's lineup has been anything but stable (in addition to DeSantis, who plays keyboards and sings, the group currently includes guitarist Steve Pae, bassist Shawn Pasbrig, singer Mike Moran, guitarist Donny Hammil, drummer Andy Silverman, and singer Jennifer Rieser), DeSantis has kept both Biaxadent and the annual Festival of Fury he hosts going strong for the past five years.

"Because I've gone through so many musicians, you would think it would be the case that I'm an asshole," he admits. "Part of it is true. I'm going to be 30. Most of the musicians I'm dealing with are younger. It's like 'Don't you understand that you were in the basement before you came to me, and once you left me, you're going back to the basement?'"

DeSantis, who keeps a day job as a landscaper ("throwing fucking mulch"), figures that some of the experiences he had while growing up have undoubtedly contributed to making him the resilient guy he is today.

"I was one of those kids who was suicidal and tried to take my life because people picked on me," says DeSantis while drinking up a bucketful of Budweisers back at the Silver Fox. "I survived it, and now I'm in a fucking awesome band. I sign autographs. I pick up beautiful girls and do all sorts of shit you would never imagine. So all you people who thought all hope was lost when you were 13, patience, my brothers. Good things come to those who fucking wait."

DeSantis has had to do plenty of waiting, too. Every time he makes some headway toward recording a new album, a band member quits, and he has to start over. To date, the group has released two albums, The Dawn of Eternal Nights and "Triumph Over Delusion." The latter, however, was only an EP, in part because the band's lineup changed during recording. But for the forthcoming album, scheduled for a July 1 release (to coincide with the band's performance at Peabody's as part of a Pantera aftershow event), DeSantis says he's written new material that breaks with the concept-album mold that he used for The Dawn of Eternal Nights.

"The new stuff is more about how pissed off we are and how sick and tired we are of people trying to fuck us over," he says. "Even though we're not really a mainstream band, if you look at the aggressive way that music is going with Limp Bizkit, Linkin Park, Korn, and Machinehead, our style of music is going to break even bigger. People in this society are getting nothing but angry. They're sick of government. They're sick of being taxed like crazy. They're sick of paying $1.95 for gas, and they need to vent their anger."

In January, DeSantis's studio was broken into, and an estimated $12,000 worth of equipment was stolen. That same month, his dad died of heart failure. DeSantis figures that, given what he's endured so far, nothing else can come close to being as devastating. While he originally tried to secure some national acts for the Festival of Fury, he says he's happy with the 12 local acts (his own included) that are playing. He thinks of the annual concert he hosts as a form of catharsis that's needed today more than ever.

"You see high school kids killing each other in schools, just because their friend called them fat," he says. "Hang it up. That's partially what the Festival of Fury is about, 'cause we give people a place to get that energy out. Come to the pit and beat the hell out of people. Don't go to school and bring a fucking gun. It ain't worth it."