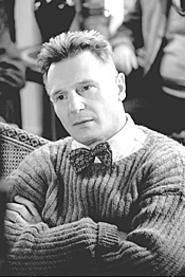 The most shocking thing about Kinsey, the first film from writer-director Bill Condon since 1998's Gods and Monsters, is how shocking it actually is. Within the confines of a standard biopic (A Beautiful Dirty Mind, you might call it), Condon refuses to play it straight -- which is only appropriate, since his subject was bisexual, condoned wife-swapping in the name of research, and was obsessed with the bedroom habits and hobbies of Americans who preferred their sex talk whispered, if mentioned at all. Perhaps Condon, who tells all and shows all, thinks of himself as a 21st-century Alfred Kinsey, releasing his full-frontal film to a country dominated by red states, where Kinsey would be as welcome as, well, Kerry. Those who voted issues of "morality" and "values" may take one peek at Peter Sarsgaard, as an assistant wagging his penis in the face of Kinsey (Liam Neeson), and point to the tantalizing prick as one more sign of a nation in decay.

Condon, faithful to several texts about Kinsey, brings the man to life in this affectionate, warm, and surprisingly funny movie -- at least, till the hordes of righteousness descend upon Kinsey like locusts on a fertile field. Initially, all is not well with the lad: He lives under the thumb of a proselytizing pop (John Lithgow), who believes everything made by man leads to sin -- especially the zipper, which provides "speedy access to moral oblivion."

Condon frames the first half of the movie like a Kinsey questionnaire: His story is revealed as a series of flashbacks, as Kinsey provides answers to probing questions posed by his assistants, among them Clyde Martin (Sarsgaard), Wardell Pomeroy (Chris O'Donnell), and Paul Gebhard (Timothy Hutton). Their mentor instructs them in how to pose a question for maximum result: Never judge the answer, no matter how bizarre it may seem, but merely understand and absorb it. Among his students is Clara "Mac" McMillen (Laura Linney), who fancies the professor, but believes him "too churchy." Theirs is a cool courtship that culminates in wedding-night lovemaking more akin to wrestling than sex. Watching the pain on her face and the humiliation on his is almost too much to bear, but Condon doesn't pull back or grimace or, yes, even judge.

Kinsey decides that he and Mac are lousy at love because no one taught them how to do it right. So on the first day of his jam-packed sex-ed class, he shows his students slides of engorged penises and penetrated vaginas; the kids are aghast and enthralled. Clyde Martin, student-turned-assistant, offers much more: He beds both Kinsey and his wife; theirs becomes a love triangle with no sharp points.

The performances are uniformly wonderful, from leads Neeson and Linney to William Sadler and Lynn Redgrave in far smaller roles.

Kinsey may indeed shock a few folks, but it's ultimately not about sex studies at all. It's a love letter from a director to a ghost who still hovers over us all.