Kenny Chesney knows the bottom of the music biz. That's why he's so happy at the top. 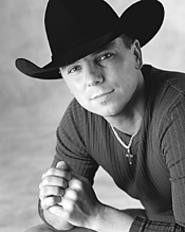 Though Chesney appears slightly embarrassed by the media's attention to his physique, he's definitely proud of it. While on the 41-city "Tim McGraw on Tour" circuit, McGraw and Chesney spend up to four hours each day on the basketball court. Both closely monitor their diets. Chesney runs daily, and he admits to having a personal trainer in tow.

The two country hunks can afford to spend the time and money on workouts. They've made it. Big. Just 10 years ago, they were barroom musicians with "wannabe" stamped across their foreheads. When Chesney moved from eastern Tennessee to the bowels of Nashville, he knew only two people there. And one of them just happened to know another nobody named Tim McGraw. Once introduced, the two were drawn together by the same dream.

"Man, we just wanted a song on the radio," says Chesney, recounting their journey to superstardom, which has culminated with the release of greatest hits albums for both men this year. "A greatest hits album wasn't even in our plan. I started, sitting on a stool with a guitar in a little Mexican restaurant when I was in college, playing music. I put my sound system in the back of my pickup truck. Now, I got three semi trucks, three buses, 50 employees.

"To be a successful touring band, playing music, is all I ever wanted to do."

Chesney's fame came despite his first label experience, in which he was cast as the artist who would make the rock and roll label Capricorn into a viable country power. The plan failed, stranding Chesney with an idling career and emotional turmoil.

"I wanted it to work more than anything, and it wasn't," he recalls, adding that he's still friendly with a number of people he met at the label. "I'm a big believer that everything happens for a reason. That was just meant to teach me a lot about the business, about radio, about the media, about the fans, and everything you have to deal with as an artist."

Now thriving on the BNA label, Chesney has had several top 10 successes, including "She's Got It All," which sat at the top of the charts for three weeks, and "How Forever Feels," which spent six weeks at No. 1. His recent single, "I Lost It," is still flirting with the top of the charts, and the first-love tune "Don't Happen Twice" has already rung the bell. Another single, "Tin Man," from Chesney's Greatest Hits album, will be released later this month. It's the second tour of the charts for the wistful song, which spent a brief time there in 1994 and which Chesney hopes will gain greater acceptance -- and airplay -- this time around.

Chesney, 33, is intent on grounding himself amid the success. "This could all go away tomorrow," he says. "Because of that, I've never taken myself too seriously. I love music. I love writing songs. I love getting up there performing and raising hell onstage. But I'm also smart enough to know that, if I don't take care of that, that it could go away."

Chesney was a songwriter first, but because it's difficult for him to switch gears between performing and writing while on the road, he's now 85 percent entertainer. He was fortunate to tour with his idols in his earlier days: three years with Alabama and two years with George Strait.

"In the clubs, I sang every George Strait song ever recorded -- even the ones that weren't singles," laughs Chesney. "So when I got to go on tour with George, hang out with George, and be able to call him and his wife Norma my friends -- it's kinda surreal. I was always one of those guys that played a lot of songs in the clubs.

"Alabama is kinda the same way. Alabama was the first concert I ever went to. I loved their music, and I still do, and now, to be able to call all of those guys my friends, it's just crazy to be able to be friends with your heroes. It's really pretty cool."

Onstage, Chesney's been cited as McGraw's inspiration. Chesney has difficulty accepting the praise. "McGraw said in one show that I inspire him and made him want to be a better artist," he says. "It's really the other way around, 'cause Tim has taught me a lot, whether he knows it or not, about pickin' songs, about being a more well-rounded artist."

Chesney and his seven-piece band open for McGraw with a high-energy 55-minute set. The massive stage setup includes 56 feet of video screens. With a spirit that's hard to contain, he prances the stage singing all of his hits, from the rocking "She Thinks My Tractor's Sexy" to "How Forever Feels" and "Don't Happen Twice." The sequence of songs he performs is based on eight years of trial and error.

"I'm constantly putting myself in the place of my fans," he says. "What's going to turn them on? What would turn me on? What would make me get up out of my seat and have a good time and leave there and not be able to wait until the record stores open the next morning? I'm constantly asking myself those questions."

In the song "Don't Happen Twice," Chesney sings of belting out "Me and Bobby McGee" from the hood of his car. He says he's never actually done such a thing, but he does admit to days lounging on the hood of his car with good friends and a few bottles of wine, singing "Sweet Home Alabama," "Feels So Right," and "every Jackson Browne song ever recorded."

Perhaps somewhere, the next country superstar is crooning Kenny Chesney songs from the hood of his car.