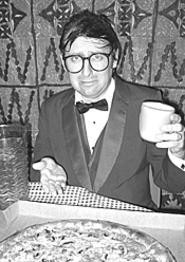 Neil Hamburger is not your average comedian. He's below average, in fact. So much so, that the greasy nerd with a toupee and road-weary groan has had a hard time convincing people he's a real comedian at all.

Hamburger's first LPs came slithering out of the mid-'90s like mysterious reissues of some bozo's lost '60s blue humor. Hamburger nonetheless called his debut America's Funnyman. The fact that his discs are on Drag City -- an indie rock label -- gave rise to rumors that he was a failed rocker going the performance-art route. His way with bad jokes, along with the hilarious, crickets-in-the-distance audience "response" captured on his albums, has finally developed a following for those who like their comedy droll and subtly antagonistic.

It's all still too gloriously silly to start dropping Hamburger's name as if it were in the same league as Andy Kaufman's. But Hamburger is at least the Roger Corman of comedy -- defiantly plying a bargain-basement version of stand-up that's still ahead of its time.

Scene: Did you ever work at a pizza joint?

Neil Hamburger: I had a fast-food job as a teenager, but I guess I wasn't cut out for it. I didn't have the skills. So I went to a job counselor and asked, what's the job that's one step below fry cook? They said, comedian.

Scene: Do you remember your first comedy gig?

NH: Yeah, that was in front of a group of troubled teens. Of course, at the time, I was one of them. The group that has, well, I guess you'd call it depression. The counselor thought it would be a good way for me to work out some demons.

Scene: But with the fair amount of success you've had, you can't be that sad anymore?

NH: Let me put it to you this way: There's a certain amount of name recognition, but they're saying, "I went to see Neil Hamburger, and I didn't like it one bit."

Scene: So I guess you don't have benefits, health insurance, and such?

NH: I have a plan with the local supermarket. They sell me these dented cans of fruit cocktail. And I feel that by eating them, I get enough vitamins that I'm protected. It's sort of an informal health plan.

Scene: I wondered, because it sounds on your records like you have a pretty bad cough.

NH: That's because I'm not eating enough fruit cocktail. If you're driving 700 or 800 miles a day on tour, the last thing you have time to do is stop off and have a picnic. And I was eating the fruit cocktails while driving for a while, but they kept spilling, and by the end of the tour, the seats are all sticky, and there's bugs and it's horrible. So my immune system probably isn't what it could be if I was eating a couple more maraschino cherries a week.

Scene: You play with rock bands sometimes. How does that go?

NH: Well, some of these bands, let's face it -- some of them don't have their chops down. So they're hoping, if they bring me out and the audience lets out all their hatred towards me, that they'll be too burnt out to throw things at the headlining band. So it works out well for them, not so well for me.

Scene: Your last album, Laugh Out Lord, had some religious humor. So I've got to ask about Terri Schiavo and the pope dying.

NH: I've got a lot of new bits about that, but I don't want to give it away, because people read it and then say, "To hell with you!" Then you've got the people who bring smoked salmon to the show and throw that onstage, and it gets all over your tuxedo. And because of that, a lot of comedians have this policy not to give away new material to reporters. It's known in the business as the "smoked-salmon policy."

Scene: What is your definition of comedy?

NH: For me, comedy is a service. Like, you've got these plumbers that come in because your toilet is all clogged, and they fix it for you, and you feel better. And then they take the raw sewage away in that container they carry around.

Scene: So your jokes are like a container of raw sewage?

NH: Well, I wouldn't go that far. But I feel everyone comes to my show with their problems, and my job is to act as a sponge and tell these jokes, and when they laugh, a hole in their soul opens up, and all the misery and problems and horror of their life is absorbed by me. So they go home in a good mood, and their problems just keep piling up in me until I crack up, and that happens pretty often.

Scene: So what keeps you going?

NH: Well, I don't really have any choice. There's nothing else for me to do. I don't have any financial security, and I don't have any other skills. And I'm booked up for the next three and a half years! I think it was Louis Farrakhan who said, "Entertainers are the new slaves." And I'm afraid that, while a lot of the things he says are crap, this particular one was right on the money.