The Odd Couple is back. The laughs, not so much. 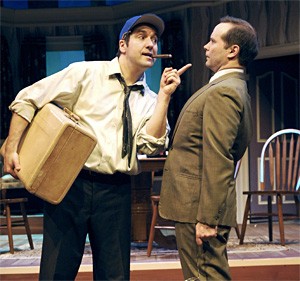 Why is it that one old play becomes a classic, while another just gets moldy? Case in point: The Odd Couple by Neil Simon, which is now experiencing its trillionth or so production, this one at the Carousel Dinner Theatre in Akron.

Since it exploded on Broadway 43 years ago, Simon's jokefest has been performed in every professional, community, and scholastic theater venue in existence, often more than once. This has given thousands of actors the chance to declaim some of the purest, most deftly constructed gag lines ever written.

Still, the question nags: Will The Odd Couple ease into the future as a formidable comedic vehicle, somewhat like a Molière play? Or will it eventually turn into a curious and brittle example of a time gone by, such as Getting Gertie's Garter, a real thigh-slapper around 1920.

Frankly, the outlook isn't bright. Even though the Carousel troupe performs with precision and energy, the laughs are only respectful and polite — the kiss of death for any comedy. The whole setup of two formerly married guys, the slob and the neat-freak, living together to save money is so played out, there may be no way to infuse freshness and surprise.

This non-updated production, under the able direction of Michael Brindisi, is the only non-musical to be staged at Carousel in the last 17 years. (Why Leslie Bricusse hasn't yet noodled out a score for an Odd Couple musical is anyone's guess). But for all its formerly surefire punch lines, the show feels mired in quicksand.

Ken Forman is quite good as Oscar, adopting the loosey-goosey gait of Walter Matthau in the film version and growling his lines with gruff good humor. When he hears that his friend Felix has been thrown out of the house by his wife, he relaxes his buddies by noting that "Felix is too nervous to kill himself; he wears a seat belt in a drive-in movie." That was a funnier line when people went to drive-in movies and almost nobody wore a seat belt.

As Felix, Todd Faulkner (who from a distance resembles Jack Lemmon) downplays his character's nervous mannerisms so much that Felix doesn't seem all that irritating, giving Oscar and the other characters less to play against. But Faulkner has Simon's timing down pat and generates the requisite number of giggles from his housekeeping obsessions ("Use a coaster or it'll leave rings!").

One thing that hasn't changed is the biggest laugh, which comes when Oscar, in his second-act rant, says, "Felix, you leave little notes on my pillow: 'We're all out of cornflakes, F.U.' It took me three hours to figure out F.U. was Felix Ungar!" But the rest of the material floats in a strange limbo, where lines that used to be funny aren't so much anymore.

Even though the cavernous Carousel stage is more suited to major musicals, the famed poker-playing scenes don't get lost in the shuffle, since the supporting actors each create crisp characters. Damian Buzzerio fashions a nicely boneheaded Vinnie, and Gary Littman breathes fire as the quick-to-anger Speed. Marc Moritz, as Murray the cop, is amusing as he frets about Felix's mental state ("A suicide telegram? Who sends a suicide telegram?"). Even the accountant Roy gets his chuckles, thanks to Richard Price's tightly wound presence.

When Oscar and Felix embark on their double date with the Pigeon sisters, who live in a flat upstairs, Katherine Puma and Nicole Greevy appear as Gwendolyn and Cecily, and twitter appealingly. But Felix turns Oscar's hopes for a passionate encounter into a pity party, complete with copious tears.

While director Brindisi keeps the pacing lively, he rushes the pivotal moment when Oscar finally invites Felix to stay at his apartment. Without room to breathe, the import of Oscar's decision is lessened, and this undercuts some of the humor to come.

If you stretch your imagination, you can come up with a rationale for staging The Odd Couple, such as its message about accepting other people for what they are. But that's not enough to subject audiences to gags that have become far too tepid over time.