That little Italian place in Lakewood has found an identity worth keeping. 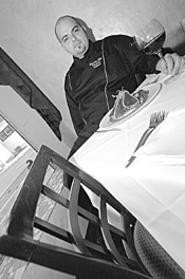 It was somewhere between the crab cakes and the insalata mista that a neighbor's cell phone sprang to life.

"Yeah, hi!" he boomed into it -- although in all honesty, it didn't take a great set of pipes to be heard across the 50-seat dining room. "We're having dinner at Bella Lucca. Bel-la Luc-ca . . . you know, that place in Lakewood, on Detroit, that changes names every two weeks!"

He exaggerated, of course. As far as we can recall, the place has changed names only three times in the past seven years or so -- from Amici's to Curcio's to Bella Lucca -- and has held onto that last name for more than a year. True, since entering its Bella Lucca phase, it has had three different owners. So, okay: Cell-Phone Guy wasn't that far off in implying that the restaurant's identity has been up for grabs.

But if anything tucked inside this shoebox of a space is worth remembering, it's the current incarnation, which has been under the ownership of gifted chef Demetrios Atheneos since November. Formerly chef de cuisine for the very upscale Giovanni's in Beachwood, Atheneos knows what it takes to wow a roomful of diners; and while the modestly appointed Bella Lucca is no Giovanni's, that hasn't stopped Atheneos from aiming high and hitting the bull's-eye nearly every time.

To say that, under Atheneos's rule, Bella Lucca is no longer a neighborhood pasta palace would be a vast understatement. (The restaurant's name, incidentally, translates as "beautiful Lucca" and refers to a small medieval town in Tuscany.) Yes, there is a melodious Italian inflection to much of the contemporary Continental menu, but it is revealed not in platters of spaghetti and meatballs, but in entrées such as sautéed Provimi veal medallions, with mushrooms, sun-dried tomatoes, and a splash of Marsala-infused veal reduction. On the other hand, dishes like sesame-and-peppercorn-crusted seared ahi tuna, with ginger-scented jasmine rice and spicy peanut sauce, are no more Italian than chopsticks.

As you might expect, too, menu prices now exceed those at the pizza parlor. Appetizers range from $5 to $12, for instance; à la carte salads check in at $6 to $11; and entrées run from $14 to $29, with occasional specials, such as one night's sumptuous Surf & Turf, going for as much as $35. But rest assured that, should those figures seem more suited to the Warehouse District than to a quiet corner of Lakewood, meticulous preparation, top-shelf ingredients, and more-than-ample portion sizes go a long way toward easing the pain of tearing open the money bags.

Besides, how can one set a price tag on perfection? It's worth pondering, since several preparations here came as close to flawless as any we've ever enjoyed. Take the rich yet almost ephemeral Maryland jumbo crab cakes, for starters: The sweet, nutty lumps of crab were bound with a swoosh of aioli, then pan-fried to a golden brown. On the side, a ribbon of Pommery mustard-zapped aioli added verve, and a lightly astringent "slaw" of ruby red radicchio and alfalfa sprouts, spritzed with dressing of white balsamic and champagne vinegars, contributed both visual beauty and palate-refreshing vivacity.

A trio of pan-seared day-boat scallops, their barely opaque interiors practically trembling beneath a glaze of caramelized jus, approached perfection too; and with a dainty toss of sweetly dressed greens on one side and silken sweet-corn-flecked risotto on the other, the "primi piatto" could easily have doubled as a light entrée. Still, we couldn't resist following it with an equally exact main course of roasted Bay of Fundy salmon, the sleek, crisp-edged filet settled on vegetable-studded rice pilaf, with satiny baby spinach "aglio e olio," fresh dill, and a crisp Chardonnay reduction.

Good as it is, however, seafood is not the kitchen's only strong suit. Consider the long-boned veal chop, for instance, precisely grilled to a succulent medium rare. So tender that it nearly dissolved beneath a butter knife . . . so well seasoned that we never even glanced in the direction of a salt shaker . . . and so all-around delicious that we had to be restrained from gnawing on the bone, this was the veal chop of our red-blooded, carnivorous dreams. But wait: Then there was the bed of mascarpone-laced risotto on which it rested (and suffice it to say, Atheneos probably makes the best risotto in Ohio); the forest-green stack-up of vibrant broccolini and asparagus spears, topped with a tender-crisp baby carrot; and the spare duet of sauces -- a savory port-wine-scented demi-glace and a slightly sweet hazelnut cream. Cutting-edge cuisine? Not at all. Perfectly executed and entirely sophisticated? Yes, and yes again!

Even dishes that fell short of utter perfection were well above average. Rosy lobster-and-shrimp bisque, for instance, was smooth as velvet and so intensely rich that we could almost taste the heavy cream; still, its alfalfa-sprout garnish was more annoying than artful, as the wilting sprouts dispersed themselves throughout the bisque, only to tangle around our spoon (and our teeth) like wet threads.

It seems almost snarky to complain, too, that the otherwise fine house Caesar salad -- a generous toss of juicy torn romaine in a light, lemony dressing, with plenty of grated pecorino and romano cheeses -- could have used a few buttery croutons; or that the raspberry vinaigrette on the insalata mista -- baby greens, sugar-coated pecans, raspberries, and fat crumbs of creamy goat cheese -- was a tad too tart.

And finally, especially because we could see that it was full of fresh garlic and meaty bits of pancetta, we can't quite understand how a creamy tomato-and-vodka sauce, tossed with penne and grilled chicken breast, could taste so pedestrian. Still, over the course of four full meals, it was the only dish that found us reaching for the salt shaker.

There are other reminders, too, that this is still a young restaurant. The current wine list, for example, is skeletal, with just six whites and six reds by the bottle or glass; an "Absolutely Marvelous Martini" ($7, from the cocktail menu) made with Absolut vodka, sweet vermouth, and cranberry juice, was amply sized and icy cold, but watery and fairly impotent; and service, although friendly and generally attentive, seemed a little unpolished.

The small room itself is intimate and comfortably appointed, however, with white table linens, votive candles, fresh flowers, and soft lighting. Golden-yellow walls with a faux-stucco finish and a collection of framed European advertising posters contribute to a "bistro" sensibility, and at least for now, the strings of white mini-lights outlining the windows add a touch of romance. But the background music, a mélange of pre-WWII swing and Big Band numbers, seemed far too loud and raucous to serve as the soundtrack for fine dining (though Atheneos says he's heard nothing but compliments about it).

After begging our server to lower the volume, we were able to contemplate sweet endings. Obviously, after such finely crafted main events, we had little interest in heavy cheesecakes or cloying peanut butter pies. But even housemade crème brûlée and tiramisu merited hardly more than a shrug -- the former a little too thin and the latter very sweet but slightly dry. Better, we decided, to simply finish up with mugs of smooth, freshly brewed cappuccino -- although that set us to thinking how good a scoop of gelato or sorbet, or perhaps a bowl of berries and cream, would have been. Alas, such options were nowhere to be found.

But these are certainly minor issues. In most ways, Atheneos and his staff have made an impressive debut, with almost shockingly good food, fairly priced and served in a charming setting. Ring us up on our cell phone two weeks from now, and we bet we'll still say the same thing. 18405 Detroit Avenue, Lakewood, 216-227-6200. 5 to 10 p.m. Tuesday through Thursday, 5 to 11 p.m. Friday and Saturday.