Beck Center's Song and Dance is really one or the other. 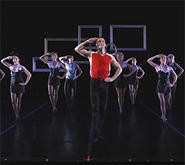 The budding novelist or poet, eager to explore unique and revolutionary methods of communicating, will sometimes consider employing gimmicks to make the world take notice of his scribblings. He might write without capital letters or eliminate punctuation, but little does he know that it takes a master -- say, e.e. cummings -- to make such high-concept approaches come off as more than shallow indulgence.

When it comes to high-concept theater, it's hard to beat a show that's exclusively sung (no dance, no dialogue) in the first act, then exclusively danced (no singing or speaking) in the second. And if that doesn't set your teeth sufficiently on edge, its coyly self-explanatory title, Song and Dance, just might. But the good news is that, against great odds, the show as staged at the Beck Center actually works, creating an emotional texture out of thin air and some extraordinary performances.

The first half is essentially a one-hour opera sung by one woman, Emma, who has just landed in New York thanks to a plane ticket paid for by her musician boyfriend from Queens. Innocent and unsuspecting, she sings her inner thoughts as well as her side of conversations, as we watch her carom from one failed relationship to another, postulating that most romance is just another "song and dance."

In this demanding role, Tracee Patterson begins slowly, but eventually forges some deeply involving moments. Lacking the pure guilelessness of a true naïf, Patterson's Emma doesn't seem quite as credulous as she should at the start. When she trills, "New York is just short of perfection/What it's missing is me!" it's as if she's observing herself acting young and foolish, as opposed to simply being so.

As Emma moves along on her journey, hooking up with a Hollywood producer and following him to his mansion in Bel Air, she starts complaining about "capped teeth and Caesar salad," and Patterson begins to find her groove. In a letter to her mum, Emma talks about West Coast men: "They're all buzzy and electric/And proud to be neurotic." But she finds that "English girls do great in L.A.," since the locals go bonkers over her accent.

One of the major strengths of this work involves the music, written by Andrew Lloyd Webber, and the lyrics, by Don Black and Richard Maltby. The melodic score feels fresh and spontaneous (as opposed to some of Webber's more predictable scores), and the words attempt a satiric twist on familiar themes, as in this reference to La-La Land: "Suntans and Sunday brunches/Sprinklers sprinkle away/It's like a fairy tale/Long as you don't inhale."

The latter part of Emma's story offers the most touching songs, allowing Patterson to display her ability to truly command the stage. Back on the right coast, she meets Joe, a Nebraskan living in New York, and tells her mother in another letter, "Joe's like no Englishman I've ever met/If I have loved other men, I forget." That is followed by "Unexpected Song," a tender ballad with this lovely image: "No matter where I am/I see your face appearing/Like an unexpected song." But the relationship gets rocky ("We would be fools to let love slip away/Everything's so right I'm scared"), until Emma describes how she wants their breakup to proceed, saying, "Take me to a park that's covered with trees/Tell me on a Sunday, please."

The arc of Emma and Joe's story works surprisingly well, given that Emma and Joe are onstage together for only a couple minutes and never even make eye contact. Credit goes to Patterson's insightful portrayal and Scott Spence's direction of this part of the show.

After intermission, the dance half features members of the Verb Ballets company, under the direction of choreographer Hernando Cortez. As Joe, muscular Mark Tomasic is the lead dancer, accompanied by eight female and two male hoofers. The dance numbers simmer with sexuality and personal confrontation, creating an accessible presentation to those who would normally steer clear of anything smacking of toe shoes and tutus.

As engaging as the dancing is, it still feels like a forced marriage with the intricate developments of act one. Performed to musical variations on Paganini's A Minor Caprice No. 24 (you know that one, right?), it includes some witty references to other tunes, including the Popeye theme song.

There is a gender truth at the heart of this bipolar song-dance approach, since in most relationships women prefer to use words, while men are more physical and immediate. Thanks to the rich sounds from the orchestra, conducted by Larry Goodpaster, and an evocatively simple set design by Trad A. Burns, most of the gaps in the piece are effectively smoothed over in Beck's supremely professional production.