They Might Be Giants gets serious about humor in its music. 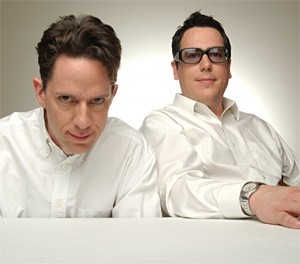 It's been more than 20 years since They Might Be Giants first started making infectious, idiosyncratic pop music, fueled by equal doses of wit and melody. Thanks to singer and guitarist John Flansburgh's video know-how, it scored an MTV hit and a college-radio fave with "Don't Let's Start" back in 1986. In 1990, the band released its major-label debut, Flood, which went gold.

Fifteen years later, They Might Be Giants scored another gold record — this one for a children's album, Here Come the ABCs. Over the years, the quirky duo continued to make great music while operating outside of the industry's usual tinkering.

Until recently, Flansburgh and bandmate John Linnell still maintained their famous Dial-A-Song phone service, where fans could call and hear a brand-new tune every week. (The feature was switched over to a podcast in 2006.) They scored a Grammy for Malcolm in the Middle's theme song. They were even the subject of an acclaimed documentary, Gigantic: A Tale of Two Johns. If that's not enough, you can also hear They Might Be Giants every single night on The Daily Show: They composed the tune that plays at the beginning of the fake news program.

Yet Flansburgh and Linnell say they've never been fully appreciated by rock fans. They're marginalized, they claim, because their songs have the audacity to be — gasp! — funny. "There are some things that are really problematic about humor in music," admits Flansburgh. "To be perfectly honest with you, it's a delicate balance for us, and I'm not sure I'm even a general endorser of the idea."

Of course, that hasn't stopped They Might Be Giants from writing funny songs. Last year's The Else is filled with peppy tunes about Mesopotamians and people going off the deep end — even if, as Flansburgh sings, they "don't really know how deep it goes." It's the sort of smarty-pants musings that critics and hipsters rip to shreds.

Flansburgh believes that rock's earnestness is often at odds with comic flourishes. "Rock music resides firmly in the world of adolescent artistic expression," he says. "Humor is largely for kids and adults. Adolescents are a lot more honest than adults. Adults live compromised, complicated lives, and that's why a lot of the expression coming from adolescents is so refreshing.

"But adolescents are also really preoccupied with appearing cool, and sometimes, in the effort to create something authentic as a writer, it's more important to get the idea out than it is to appear cool."

But the two aren't necessarily exclusive — as The Else makes clear. Flansburgh and Linnell traded ideas with the Dust Brothers — who produced the CD — throughout the writing and recording stages, treating the Brothers' Michael Simpson and John King as if they were band members, not just knob-twisters for hire.

"As a musician and a songwriter, you can feel like the producer is just an editor, and you're performing for them rather than collaborating with them," Flansburgh says. "Some producers will allow you to veto their editing process, but then it turns into this negotiated thing. Working with the Dust Brothers, there was back-and-forth, and everybody was putting their stuff way out there [without] very much posturing."

From the skittering funk of "Withered Hope" to the British Invasion stomp of "Take Out the Trash" to the surreal wordplay of "The Bee of the Bird of the Moth," The Else sounds like classic They Might Be Giants. It's by far their best work in a decade. And much of its success has to do with the Dust Brothers' sharp production.

Flansburgh says he was a little intimidated by the studio-savvy duo at first — Simpson and King helmed Beck's and Beastie Boys' best albums — but he soon settled into their work groove. While piecing together the indie-popping "Upside Down Frown," for example, auxiliary band member Dan Miller began playing an unplugged electric guitar, when King bolted from his seat.

"[King] said, 'That's the sound,'" recalls Flansburgh. "We're like, 'Yeah, that's a great part. Let's plug it into the amp and do it.' And he's like, 'No, that's the sound. Put a mic on that [unplugged] guitar.' We've recorded about 350 to 400 songs over our career, and we've approached recording a lot of different ways, but we've never done that."

They Might Be Giants just released another kids' album, Here Come the 123s. They're also updating their podcasts regularly. All the while, they're thinking about their next album, video, and tour. "It's hard to say whether it's that you want the challenge creatively or you just feel the need to do more," says Flansburgh. "This doesn't seem like a job. It's more of a compulsion.

"But it's disruptive to a regular life. I feel like I spend a fair amount of my time ducking out of dinner parties to feverishly write something down."