Hope sprouts amid the chaos of Dobama's Night Bloomers. 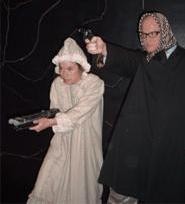 Now that a few years' worth of salve has been layered over the wounds of 9-11, more artistic interpretations of that day are finding their way into production. Flicks such as United 93 and Oliver Stone's upcoming World Trade Center tackle the horrendous morning minute by minute, attempting to forge some understanding. Meanwhile, our dear leader and his administration continue their efforts to militarize the CIA and shred most of the Bill of Rights while shoveling chum to the yahoos by igniting old fears and hatreds. (Fashion note: Mexican illegals are the new gay newlyweds for '06.)

If you think this situation is miserable, you'll have to get in line behind Sarah Morton, the talented playwright behind the riveting and thought-provoking Night Bloomers, now at Dobama Theatre. Morton has imagined an America after a future terrorist attack, a place where personal restrictions abound, head counts are conducted by low-flying helicopters, and anyone can be imprisoned for any trivial reason. In short, it's a Dick Cheney wet dream, minus the toxic-waste dunk tank for Stephen Colbert.

Lilia is an older woman who has spent the past six months since "the incident" locked away in her home. But she has a passion for a certain flower, the imaginary persinnium that blooms once a century and only at night. So she has contracted with Nathan, an ex-military pilot, to fly her to the desert, where she can witness the blossoming of this botanical metaphor and encounter hope in a world gone mad.

While the plot engine of this play may seem a bit precious (risking life and limb to glimpse a plant that opens as often as Ken Blackwell's mind?), Morton's skill at crafting detailed moments sweeps you easily into her world. The interplay between spontaneous Lilia and the taciturn, task-focused Nathan is particularly appealing. In addition to her floral obsession, Lilia's a Twinkies fanatic, and she eventually lures Nathan into a brutally efficient round of I Spy by tempting him with one of her snack cakes.

Once in the desert, Lilia discovers that the sand has been paved over by the government (no holes to duck into, no bushes to hide behind), leaving a hard black surface riven with cracks like an asphalt driveway. Nathan, ever the dedicated provider of transportation, carries Lilia on his back in search of the oasis, the water source that the persinnium requires. On the way, they engage with a number of shell-shocked citizens, all dealing with the aftermath of the terrorist attack in different ways.

These hallucinatory snapshots are as discombobulated and depressing as they are oddly comical. After they meet a nervous and exhausted woman pushing a grocery cart full of bottled water, the cart is hijacked by a man wearing a baby bonnet. Then Lilia and Nathan find themselves in a police car driven in circles by a cop who thinks he's patrolling a parking lot, although there are no buildings and no parked cars. Some of these encounters lend a poignant shading to the absurdity -- especially the older couple tying pictures of their missing daughter to the tails of kites, in hopes of tracking her down in a barren world where there are no telephone poles or fences on which to post their notices.

Nicholas Koesters does a splendid job of toning down his typically energetic stage persona and inhabiting the cramped identity of Nathan, a man who only gradually begins to blossom under the gentle guidance of Lilia. When he finally becomes vulnerable, his pain has the throb of life that gives the play its deeper echoes. As Lilia, Nan Wray is cute and mildly eccentric, but she seems to be pushing her character instead of letting it evolve naturally, making some scenes feel a bit artificial. The rest of the fine cast, most of whom portray multiple characters, is led by David Hansen, each of whose crisp mini-roles is distinctive and spot-on. Samuel Holloway is also excellent, particularly as a washed-up officer sent to guard the oasis.

Director Eric Schmiedl brings enormous invention to the staging and helps clarify many of Morton's scenes. Speeding cars zoom past in the dark, with only an offstage light and sound effects creating the chaotic mood. And, in an inspired bit, an actor lies on his back on two chairs, impersonating a Xerox machine, complete with the scanning light bar (two flashlights) and a paper jam. Set designer Russ Borski creates a forbidding yet entirely captivating space for the players, whether it's the cracked ground that continues on a vertical sweep upstage, the white helium balloon representing the transfixing moon, or the directional signs that are nothing more than curved arrows to nowhere.

And at the end, as all eyes are trained on the mysterious persinnium, a glow from an unexpected direction indicates that, as bad as it might get, perhaps not all of us will fall through the cracks.