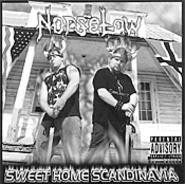 Seldom do Lynyrd Skynyrd and Vanilla Ice get props in the liner notes to the same album. Rarer still is the pair of dudes that spit rhymes in guttural death-metal growls while sporting plastic Viking headdresses.

Norse Law's first national release sets precedents in both departments. Blending rapid-fire Euro-metal fretwork with strained grunts, Sweet Home Scandinavia is battle rap in the most literal sense. Black-metal keys and old-school basement beats congeal into a mash of funk and ferocity. "Rheingold" is epic, headbanging hip-hop, complete with a sample from Swedish power-metal meatballs Hammerfall; "Euronymous and Varg" is a frosty club banger with burping beats and scratches, undoubtedly the first rap anthem ever to pay tribute to the fatal feud between two black-metal forebears. Funny and fierce, Sweet Home Scandinavia splits sides and skulls.