It's hard to fall in love with America's Sweethearts. 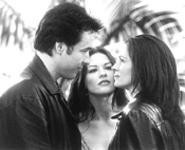 A year ago, John Cusack was smarting over his breakup with Catherine Zeta-Jones, who, he lamented, was "out of my class -- too smart, too pretty, too much." He had waited for the moment when she would discover he was a fraud, a loser in a Dickies T-shirt. When she did notice what a mistake she had made and traded up for more exotic fare, Cusack stood outside her apartment and watched her cozy up to her new, better boyfriend. Drenched by a downpour, bellowing her name up and down an empty street, he lost his mind, lit a cigarette, then went into seclusion and lost 15 pounds. At that moment, Cusack wore the look of soaked despair as honestly as any contemporary actor: Battered and beaten by love's broken promises, he was as familiar and fragile as anyone in the audience. When Zeta-Jones threw Cusack to the curb, he looked and felt every bit the inconsolable mortal -- like us, in other words, the role he's best filled throughout his career.

But the obsessive, hangdog despair that permeated 2000's High Fidelity has been replaced by obnoxious, transparent cornball comedy in America's Sweethearts, in which movie stars stop pretending they're Regular Folk and embrace their status as Beautiful People. Cusack's despair now looks like something closer to embarrassment as he tries, gamely, to play along in a world he really doesn't belong in. It's a fantasyland in which he (as Eddie Thomas) and Zeta-Jones (as Gwen Harrison) are the perfect couple off-screen and stars of several successful, beloved romantic comedies. They're actually playing Billy Crystal and Meg Ryan, if the two had married and kept on making When Harry Met Sally . . .

In fact, Crystal originally wrote the film (with Analyze This partner Peter Tolan) imagining it would be him in the role of Eddie. Instead, Crystal plays Lee Phillips, the studio public relations man charged with bringing the estranged couple together for one final press junket, for their future-cop film Time Over Time. Lee has the thankless job of conning the media and ticketbuyers into believing they're on the verge of reconciliation, even though Gwen has taken up with a new Latin lover (Hank Azaria, doing Antonio Banderas with a speech impediment).

But Crystal doesn't write movies. Rather, he pens vaudeville shtick, broad farce that plays better in the Catskills. This is a movie that expects us to somehow buy Julia Roberts as Kiki, Gwen's frumpy, put-upon sister-cum-assistant; it even dolls her up in a fat suit for two awkward flashback scenes, in which she merely looks like Movie Star Julia Roberts in padding and latex. The film commingles prop comedy with daffy slapstick, down to the scene in which Lee nearly knocks Eddie off the roof of a resort hotel in front of the assembled press. Cusack, at that moment, looks as if he's ready to jump.

It's as though, by appearing in America's Sweethearts, Cusack is trying to make up for having written and starred in a movie as sharply observant and deeply felt as High Fidelity. He's waving the white flag, selling out because no one else was buying, and as a result, he's trapped. Cusack seems to want to play Eddie real, but he's never allowed to transcend the ridiculous and obvious. The film even reenacts a scene from High Fidelity, only it replaces tangible sentiment with lowbrow camp: Once again, Cusack stands in a storm and spies Zeta-Jones (whose Gwen in every way resembles her High Fidelity character) and her new love through a window, but this time he drives his motorcycle through the glass in a misguided attempt to either kill her or win her back. When Gwen finally leaves him, Eddie winds up not in a dilapidated record store, but in a four-star spiritual sanctuary run by a hippie guru (Alan Arkin, sporting a Gregg Allman wig).

One would think Tolan, a former writer on The Larry Sanders Show, would possess more pointed barbs to toss at the Biz, but his is a gag-writer's bag of tired tricks. A studio boss (Stanley Tucci) is so desperate for a hit, he wonders how he can convince Eddie to commit suicide. Journalists are presented only as sycophantic prying hyenas and gullible swallowers of premasticated bullshit; the media circle jerk was better depicted in Roberts's Notting Hill, which hovers over America's Sweethearts like a leering specter. An aging director (Christopher Walken), who's holding Time Over Time hostage till the end of the junket, is a nutso revolutionary who edits his masterpieces in the Unabomber's cabin, which rests on the front lawn of his mansion. The jokes are easy, but ultimately hard to swallow. It's as though these famous men and women have never seen a movie, much less been in dozens and been forced to promote them to the fawning and fatuous. Never has an insiders' perspective felt so out of the loop.