A focus on the wrong woman hinders the otherwise beautiful Nowhere in Africa. 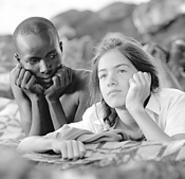 An Academy Award winner for Best Foreign Language Film and winner of five Golden Lola Awards (the German Oscars), Nowhere in Africa recounts the true story of a Jewish family who fled Nazi Germany in 1938 and found refuge in Kenya. Although beautifully shot and acted, the film is hampered by an unsympathetic lead character, whose transformation from pampered, selfish bitch to strong, self-reliant woman simply does not ring true.

Written and directed by Caroline Link, the film (in German and Swahili, with English subtitles) is based on an autobiographical novel by Stefanie Zweig, who was a child of five when she and her parents moved to Kenya. While the book unfolds from a child's perspective, Link decided to shift the film's focus to the parents. Regina (the fictional name given Zweig's character) still plays a major role in the story, but her mother, Jettel, is now the central figure.

Accustomed to the privileged life of the upper middle class, Jettel (Juliane Köhler of Aimée and Jaguar) makes no effort to adjust to her reduced circumstances. Refusing to learn either the language or the local customs, she is condescending and rude to Owuor (Sidede Onyulo), the cook her husband has hired, and openly contemptuous of her husband, Walter (Merab Ninidze), who has gone from being a well-respected lawyer in Germany to a lowly farmhand in Africa. The marriage starts to disintegrate.

Unlike her mother, Regina (Lea Kurka) falls in love with Africa. Shy but curious, she quickly befriends the local children and warmly embraces the unfamiliar culture. She and Owuor form an especially strong bond.

The film follows the family through the war years, during which time Regina (played as an adolescent by Karoline Eckertz) is sent to boarding school in Nairobi, and Walter is interned as an "enemy alien" by the British (who ruled Kenya until granting their former colony independence in 1963).

Link (whose 1996 film Beyond Silence was also nominated for a Best Foreign Language Film Oscar) seems to find Jettel a far more interesting character than the viewer does. The audience is supposed to buy Jettel's slow maturation from a spoiled, ungrateful woman into a strong, caring individual and to forgive her earlier behavior. But we never see what brings about this supposed transformation. As good as Köhler is -- and, boy, is she ever persuasive as the cold, narcissistic wife -- we never see the experiences or series of small emotional moments that change her perception of either Africa or her lot in life. Even once she starts to settle into Africa, we don't see the country through her eyes.

The complete opposite is true of Regina (played beautifully by both young actresses), who brings the viewer along with her. There is a connection between her and the landscape that eludes Jettel, even after she changes. In fact, that is one reason why her transformation feels so false.

Despite this fairly major criticism, the film has many things going for it: fine performances (including Matthias Habich as Süsskind, another German émigré-turned-farmer), a lovely score by Niki Reiser, and evocative camera work by cinematographer Gernot Roll. The first 10 or 15 minutes of the film cut between Jettel's life in Germany and Walter's life in Africa. This serves as a kind of prelude and is told with great economy and emotional feeling. Link also has a wonderful way of starting with a medium shot and then slowly pulling back to reveal the entire landscape -- in one instance, a boy riding a bicycle is gradually surrounded until he merges into the countryside completely. It is this setting -- as well as the simple story of a family forced to start life anew -- that carries the film's emotional power. If only Link hadn't pushed the mother's story front and center. It is the weakest element in the film. Unfortunately, it is also the biggest element.