XIII vaults Mushroomhead into the top 40. 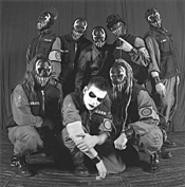 At a little before midnight outside the Parma Exchange, the line starts at the door, snakes around a few right-angle turns, then stretches down the next block. The crowd began gathering outside the record store four hours earlier, awaiting an appearance by Mushroomhead, the modern-metal octet celebrating the release of its first album for a major label. Fans keep warm with sporadic chants of Mush-room-head. Some carry hand-held cameras equipped with bright lights, lapping the line like news helicopters circling a traffic jam.

Behind the strip mall, inside the tour bus, the band members add final touches to their battle gear: camouflage outfits, marching boots, and black vests bearing Mushroomhead's trademark logo on the back -- a menacing face with long, sharp fangs and X's for eyes. Ready for action, they exit the bus single file, like paratroopers jumping into a hot zone.

As the Exchange's doors are thrown open, fans scurry alongside two long tables, where the band members greet them, one by one. Some have come to buy the CD, others just to meet the band. Accompanied by parents wearing Mushroomhead shirts, a boy who appears to be all of eight years old has his face painted to look like singer J. Mann, his features white with skeletal black eyes. One diehard fondly remembers last year's Halloween show, an annual tradition of sold-out gigs at midsized venues around town (this year's bash, the eighth, spills over two nights at the Phantasy).

"Best fuckin' pit I've ever been in in my life," he bellows at masked guitarist Gravy.

Between midnight and 3 a.m., Mushroomhead has greeted a procession of 1,500 people -- only Pantera's in-store appearance three years ago drew a larger crowd to the Exchange. By the band's count, they've pushed 666 copies of the new LP, XIII. Within days, the national charts back them up: XIII debuted at No. 40 on the Billboard Top 200. Nielsen SoundScan reported 28,000 copies sold in its opening week -- a solid start, especially with the tour barely under way.

"For me, being successful means doing well enough to let us continue making records," says J. Mann. That shouldn't be a problem.

Back at Filthy Hands, the North Royalton compound that houses Mushroomhead's audio and video studios, rehearsal space, and offices, years of memorabilia hangs from the walls: old concert fliers, an X-eyes clock, a gold CD from the Scorpion King soundtrack (which included the 'Head track "Along the Way"), a well-worn trench coat, which was once a stage prop. Stacks of fliers feature shots of the band brandishing their favorite weapons: AR-15 assault rifles, a Colt .45, Smith & Wesson .45, .40 Glock, and a 12-gauge pistol-grip shotgun they call "The Persuader."

"From day one, the plan was to have costumes, to do something different," says singer Jeffrey Nothing, who, not so surprisingly, looks much less menacing when his face isn't painted to look like a ravenous devil's. The matching military motif is the final step in an evolving look, which through the years has included S&M props, cheap rubber masks, and jumpsuits.

The fatigues aren't just cool, Nothing says; they're symbolic. "We're pretty much a unit."

October 23 marked the unit's 10th anniversary. Through the '90s, Mushroomhead grew from the status of novelty act to local hero, with a production and sound unmatched by anything else being done regionally. The band developed a cultish following that bombarded unflattering critics with hate mail and pelted rival bands with garbage. During the nationwide explosion of nü metal and rap rock in the mid-'90s, Mushroomhead released four popular LPs, the first three on its Shroomco label. Majors eventually came calling, but none offered a deal worth taking.

In 1999, the band dropped the artfully metallic XX, on the New Jersey indie label Eclipse. It sold more than 50,000 copies -- enough to catch the attention of Universal. By the time Mushroomhead signed on with the major in 2001, sales of the indie version of XX had long since covered the album's expenses -- though a chunk of the band's signing bonus went back to funding a remix (by Toby Wright, of Korn and Alice in Chains fame). The subsequent Universal release sold another 100,000-plus copies without any marketing hype from the label.

By the time the band turned its sights to XIII, Universal was there to offer a push. Drummer Skinny, the band's normal producer, was aided by Johnny K (Disturbed); Deftones studio hand Matt Felton mixed the disc. As the release date approached, the label sent Mushroomhead on tour with rock kings Godsmack. Encouraged by a warm pre-release radio reception of "Sun Doesn't Rise," Universal landed the band on MTV2's Headbanger's Ball, metal's premier video showcase. The visually arresting clip, featuring a murderous scarecrow with a jack-o'-lantern head, stands out among the band's competition.

Nevertheless, XIII arrives at a curious time. In the years since its last disc came out, most nü-metal bands have cooled considerably. Competition for the headbanger buck is now split between the Class of '97 -- platinum bands with ball caps, Adidas gear, endless issues, and rap vocals -- and the neo-thrash movement.

With two singers, two guitarists, a bassist, drummer, keyboardist, and sampler/DJ, Mushroomhead straddles the two styles: Mann's vocals alternate between barked raps and grindcore growls. Nothing's warbling choruses mock the clichéd soaring sounds of modern-rock radio. Grind riffs and double-kick-bass drum rolls pound, scrape, and bash. The band ultimately isn't indebted to any metal tradition; it falls directly in line with the outbursts of the art-funk psychoses of Faith No More, the band that set the tone for new metal's nothing-off-limits aesthetic.