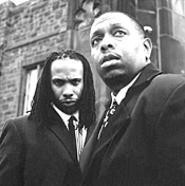 Perhaps the only thing Trent Reznor has in common with R&B star Avant is that both of them bolted town as soon as they could afford a classier ride out than Greyhound. Ditto for Filter's Richard Patrick and a few of the Bone Thugs-N-Harmony guys. These days, it's become increasingly rare for local talent to stick around and rep their home city, once their careers have begun to blossom.

And so it's kind of ironic that two of Cleveland's most popular acts both decided to embrace their origins by naming themselves after our beloved area code. The Mushroomhead side project (216) has become one of the city's top metal draws, while rappers 216 landed a deal with Universal earlier this year and have already notched a radio hit. Of course, if the good fortune continues for both bands, somebody's going to have to dial up a new name. (216) has laid claim to it longer, but does that alone make the band more worthy? Our tale of the tape seeks the answer:

Who: Rappers 216
'Hood: East Cleveland
Hometown shoutouts: "I'm from that C-L-E/The E-V-E-L-A-N-D/Home of them pimps like my nigga da G-A-M-E" (from the single "Yeah").
Do they sound like Cleveland?: Seeing how we were freshly named the most impoverished of all large U.S. cities, 216's shadowy tales of urban strife would seem the perfect chronicle of the typical life experience here. The band's hit single "Yeah," which lit up local airwaves on WENZ and WZAK this summer, embodies 216's dark yet danceable ethos. It begins with the slow, steady thump of a kick drum, bringing to mind the forbidding intro to Black Sabbath's "Iron Man," then takes flight with dramatic strings and verbal buckshot. "From my stompin' ground/See what I'm talkin' 'bout/Got mothers that's prostituting/Fathers that's walking out," come the rhymes, fast and fleet, like Bone Thugs in fifth gear. It's one of the few club hits with a conscience you're likely to hear.
Why they're good for Cleveland: While 216 speaks of inner-city hardship and violence, they don't resign themselves to it. These dudes see the light at the end of the blight and seem determined to raise spirits along with bottles of Cristal. "Stop depending on luck, because that won't save us," they implore on "Yeah." Cue that one up for the mayor.

Who: Metal band (216)
'Hood: North Royalton
Hometown shoutouts: None to speak of, though when singer Jason Popson growls, "There's no way to win/There's no way out/It's time again" (on the song "Knock You Down"), you can't help but think of the start to another Browns campaign.
Do they sound like Cleveland?: More specifically, this bunch sounds like the industrial Flats look: cold, steely, and menacing, with the scent of sweat and hard labor hanging in the air. In a town where manufacturing still forms the frayed backbone, (216) approximates the clang of heavy machinery -- all cement-mixer riffs, crater-making rhythms, and bloodied yowls. These dudes could be the house band at U.S. Steel.
Why they're good for Cleveland: Whereas many rockers think waking up at sunset, pissing out last night's Pabst, and hanging up a flier at the nearest Winking Lizard constitutes a good day's work, (216) has brought a blue-collar work ethic to local music, slowly building itself into one of Cleveland's top metal acts after years of toiling in the underground. When the band was launched in the late '90s, it often opened for Mushroomhead, with its members pulling double duty in both bands. That's no easy task, when the music you're playing demands effort akin to running upstairs in combat boots.

Verdict: Both bands are strong representatives of the two largest constituencies in Cleveland music -- metal and hip-hop. But 216 more explicitly embodies the strife that has long been this city's Achilles' heel, and thus they're more representative of their area code. Besides, (216) hails from the mean streets of the southwestern 'burbs. And "440" is still available, guys.