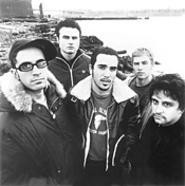 "The majority of the white-trash kids in the Midwest who are gonna listen to Korn or Limp Bizkit -- they're never gonna hear of us," declares Glassjaw frontman Daryl Palumbo. "I don't really care. That was never the goal."

Daryl deliberately sounds like something of an asshole. He has to. When you're fronting a very nü-metal-sounding band desperate to avoid the nü-metal tag, the need to be an asshole doesn't just come with the territory. It is the territory.

For now, we will bow to Daryl's will and call Glassjaw "hardcore." That's the common thread he wraps around the Sno-Core tour, a four-band monstrosity of which Glassjaw is the most intriguing -- if not most prominent -- element. Elsewhere, Dredg is a pretentious but very disorientingly enjoyable art-metal act. Hot Water Music is a hugely respected hardcore gold standard. And Sparta's aggro-pop is OK, though a million times less exhilarating than the band it sprang from, At the Drive In.

The tour is described as a "celebration of cutting-edge rock and the snow-sports lifestyle," which means that, at any point, the Odeon floor may drop like a trapdoor and dump the audience into a giant pool of lime Gatorade.

Glassjaw's Warner Bros. debut, Worship and Tribute, is the aural equivalent of such a bath. It's difficult to describe without using violence-associated verbs: Guitars knife. Drums pound. Bass eviscerates. And Daryl shrieks like the victim of all these assaults, howling in a "lookit-me-I'm-crazy" shriek that devolves into epic whining fits, maniacal laughter, and blood-curdling screams.

What's that he's screaming? "The smell of magnesium, the smile of a clown/I want to drink you, scare you, fuck you, and film you."

Quite hammy, this. Daryl sounds like a very angry Nathan Lane.

"It's funny. Labels? A lot of people have problems with labels," Daryl says. "Labels are cool -- if you get them right. Labels and prefixes help people understand what you're trying to do. But just get them right. That screamo thing is funny. They're wrong half the time. But it's interesting."

Daryl has wrassled with critics over far more serious issues. Though sired and cultivated for years on the N.Y.C. hardcore circuit, Glassjaw didn't publicly emerge until 2000's Everything You Ever Wanted to Know About Silence, a record dually noted for its resounding sonic intensity and sub-moronic misogyny.

Woo-hah. Such new lyrical beauties as "Grunt fuck, grin fuck, push her in the snow fuck" suggest Daryl has retained his He-Man Women-Haters Club membership, but he's no longer an Eminem-class douche bag.

"It's what happened in me naturally," he says. "I was much younger -- 19, 20 -- when we made that first record. There were a lot of pressures in different ways to be honest and angry, and do this and do that, and a lot of it was coming out and channeling itself in very immature, weird ways.

These days, Daryl uses his podium to get silly and cocky with regard to his competition. Ross Robinson, producer of both Silence and Tribute, is the link. Robinson also manned the poop deck for Korn and Limp Bizkit's breakout albums -- the looming shadow Glassjaw desperately needs to duck out from under.

"I don't think anyone even cares about the bands Ross has worked with anymore," Daryl says. "At this point, nobody even links Ross with Korn and fuckin' Limp Bizkit, 'cause who really gives a shit about either of those bands?"

Not Ross Robinson, evidently. His stated intention for Silence was to "destroy Adidas rock."

"Do I think we destroyed Adidas rock? No. We definitely didn't," Daryl says. "But I think we did, however, set a new standard. I know for a fact that we set a new trend for what type of bands giant labels were signing. I know a lot of major labels were tryin' to sign bands that sounded and looked like fuckin' Glassjaw."

All right. He's getting carried away. And besides, he owes a very crucial element of the Glassjaw mystique to Korn: the whiny confessional. Korn's "Daddy," on which Jonathan Davis literally sobs as he violently recounts his abused childhood, practically kick-started a whole "lick my wounds in public" genre, with scores of angst-ridden young studs vying to out-diary-entry one another.

Daryl's wordplay may be more oblique nowadays (good line: "We are the most impassioned ugly people"), but ex-girlfriend rage is easy to spot, and it's pain he's intent on letting his fans feel. The key to success for Glassjaw-type bands is convincing people I really, really, really mean it and You really, really, really, honestly know everything about me.

"We'd kill or be killed for someone who is devoted to this band," Daryl says. "That's why we're here right now. That's why I'm here in life -- without people appreciating the band, I'd probably be dead. It's the most important thing in the whole world."