A tabloid sensation sets his sonar on the stage. 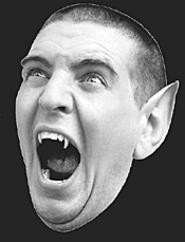 It's hard to believe that a play based on a tabloid story about a boy/bat hybrid found in a West Virginia cave would be, according to director Victoria Bussert, "very touching." But she insists that Bat Boy: The Musical (which opens Friday at Cain Park's Alma Theater) has a "very sweet center to it. And that's the surprise to the piece."

Premiered off Broadway two years ago, Bat Boy was inspired by an infamous Weekly World News headline that screamed, "Bat Child Found in Cave." (An accompanying photo featured an equally hysterical bat-kid.) It's a song-filled production that toes the line between The Rocky Horror Show (it's self-consciously campy) and Footloose (misunderstood lad stirs things up in a small community).

Which, really, is the only way to play a pop-culture hit like this. Since his tabloid debut 11 years ago, Bat Boy has fought the axis of evil, was accidentally sprayed with insecticide by an exterminator, and has stalked First Daughter Jenna Bush. "They literally bring him back every few months with the worst kind of doctored photos," Bussert says. "He has his own following and fan club.

"But the score is so exuberant. Many people associate musical theater with musicals of the '30s and '40s. This has a complete contemporary appeal to it. It feels more like a rock concert. It's at that kind of decibel level."

And the songs drive the production. It's highly theatrical rock and roll that winks at both show-tune convention and over-the-top love songs ("Hold me, Bat Boy/Touch me, Bat Boy," sings one smitten character). "It sends up a lot of musical references -- Sweeney Todd, Gypsy," Bussert says. "And the cast has to dance like they're doing an MTV video."

Yet it's the story that holds it all together. It ain't Sondheim, Bussert readily admits, but the tale of the fang-faced kid does fly a broad narrative path. And despite the satirical undertones, Bat Boy -- like Bat Boy, presumably -- has a soul at its center. "The characters have real heart," Bussert says. It's also more than a little conscious of its sincerity, fervor, and absurdity. "It's hard to stage something like this. I hate to use the word believable, because it brings it down to thinking that there's going to be some naturalism [to the story]. And it's not that. It's about accepting others, whatever they look like."

She pauses. "Even if they look like Bat Boy."