The Family Stone is hard to like, harder still to hate. 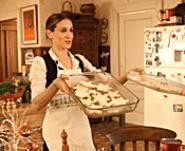 One cannot, in good conscience, describe the countless strands of plot and strains of characters skittering through The Family Stone without knowing that the description merits at least a snicker . . . Okay, all right, bellowing guffaws. The movie's overstuffed by half with pointless people and plot lines that dangle like warning signs, begging you to stay away, lest you suffer the holiday heart attack brought on by rich and empty calories. And yet as ridiculous, as mawkish, as schizophrenic as The Family Stone is, it's also surprisingly endearing -- a movie about people who behave the way real folks would, if their onscreen lives weren't always manipulated by overeager filmmakers and greedy studio bosses squeezing every last drop of sentimentality from ultimately resistant characters. In short, the movie works in spite of itself.

One after another, characters pile into the snow-covered Stone household like refugees, till at last it's filled with every conceivable archetype known to hackdom. Son Thad (Tyrone Giordano) is gay and deaf; for the holidays, he brings home his longtime African American partner, Patrick (Brian White), whom the family adores. Son Ben (Luke Wilson) is a doper who smokes bowls with the old man (Craig T. Nelson) in Christmas Eve snowdrifts. Daughter Amy (Rachel McAdams), a sneer smeared across her face, is grungy and troublesome.

There is also pregnant daughter Susannah (Elizabeth Reaser), whose husband is absent, despite his promise to arrive Christmas morning. (The suggestion here, that Susannah is suffering marital woes, is a distracting, unnecessary, and ultimately fruitless threat.) And then there is eldest son Everett (Dermot Mulroney), a buttoned-up boy who brings with him an uptight girlfriend, Meredith (Sarah Jessica Parker). She's so bereft of spunk and warmth that the family loathes her -- save for Ben, who spies through his stoner's haze the "freak flag" that Meredith keeps furled inside her. Hovering over them all is the good mother, Sybil Stone (Diane Keaton), one of those beloved, tragic figures without whom home-for-the-holidays movies wouldn't be the same.

Good Lord. This oughta stink, and occasionally it does; writer-director Thomas Bezucha, a former Ralph Lauren exec, stuffs his holiday fruitcake with enough extras to gag on: the drab but kind ambulance driver (Paul Schneider), who took Amy's virginity years ago and still pines for the sarcastic princess; Meredith's beautiful sister (Claire Danes), who arrives to back up her embattled sibling; the precocious six-year-old granddaughter (Savannah Stehlin); and the precious baby that Thad and Patrick adopt.

Bezucha has almost accidentally hit upon a rather novel concept: a melodrama played for laughs. Somehow the movie doesn't elicit its titters accidentally -- say, because it has overreached and failed -- but because its laughs are genuine.

Why The Family Stone works isn't hard to fathom: It's sweet and sincere, and treats its characters not like the cardboard cutouts they appear to be on paper, but as, well, family. It's the perfect end-of-the-year trifle: a warm, earnest little gift that, at the very least, doesn't know when to stop giving.