Amy Mann's music shines a light on the shadowy terrain of the human heart. 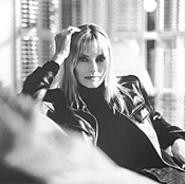 Artists whose reputations precede them usually fall into one of three categories: legends, problem kids, and the overhyped. Aimee Mann can't be forced into any of those pigeonholes. She might one day be considered a legend; to many songwriters, she already is. A fighter for artists' rights and rebel against major-label hegemony, she exudes a quiet intensity more befitting a poet than a rabble-rouser, or for that matter, a diva or a brat. She is persona-free.

And she is that rare beast who exceeds her own hype. A publicity storm thrashed around her Oscar-nominated contribution to the film Magnolia, but director Paul Thomas Anderson credited a single line from one of her songs with inspiring his entire story. Mann could teach more than half of Hollywood's leading actors, writers, and directors a thing or two about the human condition. She is a psychologist of the heart, ferocious and acute.

"I guess the thing that preoccupies me is the way people try to relate to each other," Mann explains, speaking by phone from her L.A. recording studio. "And how difficult it is for them to really see each other or bare themselves in any way."

Mann is talking about her most recent album, 2002's Lost in Space. But her words also describe the confused human yearnings and dissatisfactions catalogued on 1995's relatively poptastic I'm With Stupid, and 2000's Bachelor #2. Lost In Space, however, is the first record over which she's had complete creative control; Bachelor was the subject of a now-legendary struggle with her former label, Geffen, which culminated in Mann buying her tapes back and hanging her own shingle, the aptly titled SuperEgo Records.

"It's really refreshing," she says, "having your own timetable and no one to satisfy but yourself. Every other record I've made, there's been someone standing over me saying, you know, where's the single? How about a couple cheerful ones? Something catchy." She sighs. "That kind of thing never made sense to me -- I mean, the albums I enjoy listening to are usually the ones that sustain a mood the whole way through and go really deeply into it. I like depressing songs. And I like depressing albums. I'm not afraid of them. And I don't know that I find them particularly depressing."

To judge from Lost In Space, which meditates on classic Mann themes through the metaphorical prism of addiction, she is a committed believer in the value of knowing that other people are just as fucked up as you are.

"I think when people have specific addictions, there's a world they create that they're completely inside," she says. "And it's incomprehensible to people outside that world. That seemed emblematic to me of a more general kind of human loneliness or isolation. I have to believe that's pretty universal -- it's just very pronounced in the case of addicts."

If Mann's words come off as clinical (indeed, her voice never rises above a therapist's subdued tone), there's a reason: Her songwriting on Lost in Space was inspired in large part by some leisure reading on the psychology of addiction. But like an actress studying case histories in order to play a part, Mann conducted her research in the service of unlocking emotional truth.

"Mostly, my songs start from a musical place, and the music sets up a certain mood," Mann explains, "which I then interpret in the lyrics by thinking up some story or scene that feels like it's the equivalent. It always seems to me that music and a melody are already about something -- you just have to listen, then come up with words that sort of describe how it makes you feel."

Although all her previous records have been immaculately produced and arranged, Lost In Space charts new, more orchestral territory for Mann.

"I always wanted to use, you know, strings," Mann says, "but it always seemed prohibitively expensive. I suppose that's one of the things that I've been allowed to pursue as a result of both running my own show and also the wider exposure that happened as a result of Magnolia. I have more of a built-in audience for my records now.

"But to a certain degree, changes in the way the albums sound are one of those things that just happen -- maybe because of who's around or who you're working with or when you got into the studio to record the songs."

Mann goes on to explain that the sound of Lost in Space was dictated in large part by the fact that it was recorded intermittently, in between tours with her husband, musician and producer Michael Penn.

"It was very stop-and-start," she says. "I'm not one to over-romanticize the studio experience; it can be very claustrophobic, both personally and creatively, and being able to take time away meant the songs could grow between sessions. It's sort of ironic, actually -- they expanded, instrumentally, because of my touring schedule, and yet, when I play them live, they automatically get stripped back down to something a five-piece band can play."

As a result, on Mann's upcoming tour, fans can expect, in her phrase, "tougher" versions of the Lost in Space songs.

"Tougher and faster," she suggests. "That's pretty much true of all the songs, in fact. Playing live gives them a different workout, especially in larger venues. You can't get across the same kind of fragility or intimacy."

Sonically, perhaps, some of the "fragility and intimacy" of Mann's songs gets lost in acoustic translation. But rest assured: If you're brave enough to recognize yourself in Mann's songs, the humanity comes through loud and clear.