Two sets of grizzled bears fight it out in contrasting revivals. 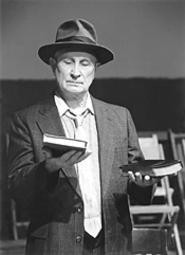 Dating back to the Church's favorite best-seller, where we find the Archangel Michael duking it out with Satan for the fate of the world, titanic battles between worthy adversaries have been the cornerstones of thrilling storytelling.

This week, that grand tradition continues in two local theaters. At the Jewish Community Center is Neil Simon's The Sunshine Boys, and at the remarkably prolific Beck Center is Jerome Lawrence and Robert E. Lee's Inherit the Wind. Aside from both centering on the final confrontation of aged opponents, there are other striking similarities: Both offer plum roles for over-50 actors, and both revolve around fictionalized historical figures. The Sunshine Boys' protagonists, Willie Clark and Al Lewis, are based on the vaudeville team of Smith and Dale; Inherit the Wind's courtroom antagonists are lightly disguised versions of orator William Jennings Bryan and great trial lawyer Clarence Darrow. Both works reach their apotheosis in their much-improved film versions and have to strive to retain their place onstage.

Playwright Simon started writing for radio after World War II and began making his reputation as a skit writer for Sid Caesar's Your Show of Shows. Subsequently, his most savvy work is the chronicling of the nuances and egos of show business. All his characters speak with a knowing brashness, each performing his own verbal soft-shoe patter.

In The Sunshine Boys, which premiered on Broadway in 1972, two retired vaudevillians, former partners who acrimoniously parted, are persuaded by one's daughter and the other's nephew to perform one of their classic sketches for a TV retrospective on the history of American comedy. One of the pair has a running complaint about how the other pokes him in the chest while delivering a punch line. Simon, with his impeccable timing, builds this into a glorious climax.

Another joy is Simon's giddy pastiche of an old burlesque doctor sketch, replete with de rigueur big-breasted, bubble-headed nurse; leering doctor; and wisecracking patient (Doctor: "How long have you had that white coat on your tongue?" Patient: "Since January. In the spring, I put on a gray sports jacket").

The TV rehearsal is an escalating disaster. While rekindling their old shtick, they also resurrect ancient recriminations and grudges, all leading to pandemonium and a heart attack. Yet Simon, who cannot bear true darkness, concocts a touching ending, as the two head off to the old actors' home.

Director Brian Zoldessy's staging expresses the vital Simon rhythms that merrily bounce between sarcasm and affection. The relationships are lovingly developed, and a whole world of schmaltzy show-business self-dramatization is evoked.

The cast members wear their roles as comfortably as old slippers. Victor C. Goodman, as the irascible Clark, strikes the perfect compromise between petulance and pathos. As his equally distressed partner, James P. Kisicki is as willful as he is endearingly vague. George Roth, as the devoted nephew, offers a profoundly humane performance.

As sweet and nostalgic as an evening with Jack Benny and Rochester, this play functions plaintively as a valentine to vanished vaudeville and as a sympathy note to gently mourn the irrevocable decay of passing years.

Inherit the Wind, an epic about evolution vs. fundamentalism, ironically catches Beck Center in its own painful evolution between community and professional theater. Taken from what is known as the 1925 Scopes "monkey trial," in which a young schoolteacher was prosecuted for violating Tennessee state laws by teaching Darwinism, the play became the bellwether of the 20th century's epic battle between faith and science.

At its best, Lawrence and Lee's 1955 work has the moral grandeur of one of those patriotic tableaux painted on government buildings; at its worst, it's as heavy-handed as a junior-high civics lecture. The Beck Center production is torn apart by a great schism: On one side, its four leads -- Ron Newell's exquisitely astringent pillar of moral rectitude; Bernard Canepari's kindly fire-breathing archaic moralizer; Brian Etchell's fine-grained schoolteacher; and Kat McIntosh's conflicted minister's daughter -- all contribute vividly rendered, finely etched theatrical portraits, representing live theater at its best. On the other hand, the rest of the company is clumsily directed by Scott Spence, suggesting more of a circus than a small town. Tom Cullinan, as the cynical reporter, tries for a larger-than-life performance, but unfortunately ends up with a grotesqueness reminiscent of a depraved Charlie McCarthy doll instead.

Such community-theater failings, mixed as they are with four superbly crafted performances, leave audiences frustrated for what could have been.