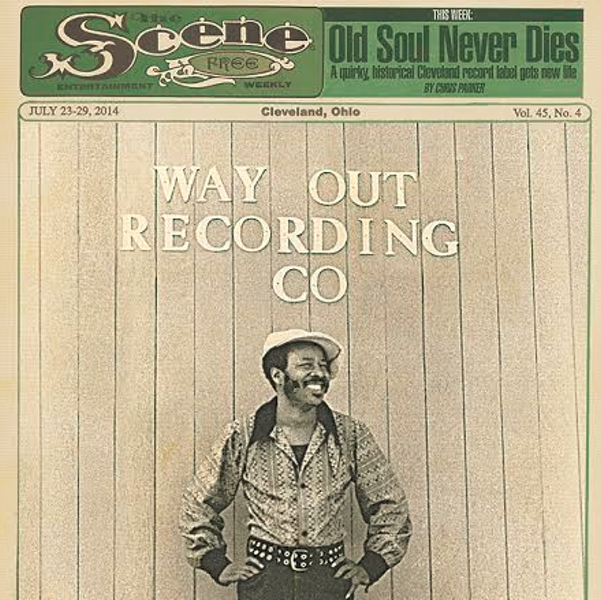 Photo courtesy of Numero Group Jim Brown was an early investor as he left football behind.

History is written by the victors. That's why you've heard of Motown or Stax Records and not Cleveland's own soul upstart, Way Out Records. Housed in a storefront on East 55th St. between Euclid and Chester, the label grew out of an odd-couple partnership between a hustler and a cop.

It released 35 records over eleven years from 1962 to 1973, but despite an occasional alliance with Atlantic or MGM, its artists never found great success and Way Out finally blinked out of existence without much to show for its life. Since then, for four-plus decades or so, the music produced there has remained chiefly the province of vinyl collectors, locked away with other rare 45s.

But it has gotten a fresh look as of late. On July 15, upstart Chicago label Numero Group shed light on this chapter in Cleveland music history with the release of a two-disc label anthology on the Eccentric Soul moniker. Among the label's 53 releases are a three-disc retrospective of local artist Lou Ragland and another three-disc collection featuring the best of the local Boddie Recording Company's in-house labels.

"Eccentric Soul is a phylum of music we've deemed a bit left of center," says Numero Group's Jon Kirby. "You have your Motown, Stax, and High Records. Then you have these musicians and labels that are sort of orphaned from the mainstream."

Eccentric Soul began a decade ago with an anthology of recordings by Columbus native Bill Moss's CapSoul label. Indeed, the Way Out release was actually accompanied by another collection of Columbus R&B entitled Capital City Soul. Numero has made it its mission to seek out forgotten nuggets and those that barely saw the light of day.

"They never took hold and sometimes it's just bum luck or bad distribution deals. Sometimes it was just something that went against the grain," says Kirby. "The independent soul man who may have been one toke over the line, or had three guitarists when one would've sufficed. They didn't always fit in to the musical communities where they were operating. They were people that took risks and made great music that deserves to be celebrated."

The anthology features forty tracks of R&B and soul recorded and released in Cleveland more than 40 years ago. It's highlighted by the sultry feminine funk strut of Betty & Angel's "Honey Coated Loving," the lush harmony-laden sweep of The Sensations' "I Won't Be Hurt" and the elegant jazz-pop "Red Robin" by Volcanic Eruption, featuring backing by the O'Jays (excluding Eddie Levert).

"I don't think this music is by any means inaccessible," says Kirby. "It just means there are people whose music is 40 years old who are now making their debut."

Lester Johnson started Way Out in 1962, and Cleveland cop Bill Branch joined up a couple years later. At the time, Branch was managing The Delamingos. The duo knew each other from around town, as Branch describes it, and eventually connected on their love of music. The two hit it off and would remain close friends until Johnson's death from pancreatic cancer in 1979. The lean, fit 84-year old Branch stays busy working as an electrician these days.

"I don't want to sit at home," says Branch, chatting in a Wendy's on East 55th not far from the site of Way Out's offices.

From the beginning the name was prophetic. "Lester called it Way Out because he thought it as a way out idea to attempt this," says Branch.

Ragland got his start as a teen leading the back-up house band at the old Music Box on Euclid. Johnson caught him performing Joe Scott's "Never Let Me Go" in 1963 and asked Ragland to cut it as Way Out's third-ever release, his only one for the label.

It'd earn Ragland a trip to L.A. to join Billy Ward and the Dominos, but he'd return four months later when Ward tried to cheat him out of credit for his musical contributions. After Ragland came back he sought out Johnson and wound up Way Out's only full-time employee and jack-of-all-trades. He was the in-house engineer, publicist, producer, arranger, writer and session sideman.

But they were rank amateurs who didn't understand what goes into making a successful record. Mostly they discounted the importance of publicity. It wasn't that uncommon among these small-time operators, some of whom — not necessarily Way Out — may have been laundering money.

"There are records by gangsters, hustlers, card sharks and numbers runners but when there is no obligation to make that money back when that money is just kind of free money, there's also no obligation to promote it or provide distribution," Kirby says. "That's why a lot of these groups do end up in a warehouse somewhere."

During his brief time with Ward, that's one thing Ragland noted — Ward was a talented and relentless self-promoter. Ragland knew this was missing and stepped into the breech.

"Promotional and marketing departments didn't exist at Way Out. Closest they got was me writing those booklets and taking photographs," says Ragland. "That was a major part of it so when we spread out to Milwaukee, Chicago, Indiana, New York and all that stuff we didn't have any publicity to go along with it so it didn't catch fire. But the records got their fair share of airplay."