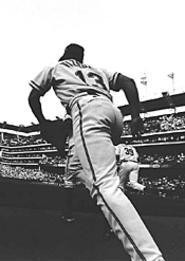 When Omar Vizquel joined the Indians a decade ago, he was a slick shortstop with not much of a bat. He even committed three errors in a single game during his second week with the Tribe. "It seems like a really long time ago," says Vizquel. "Especially because I'm the last guy that's still around."

Vizquel's contract expires at the end of the season and prospects with minimum salaries are waiting in the wings, so this weekend's series against the Twins in Minnesota could be the last chance to see him in an Indians uniform. "I understand what kind of business we're involved in," he says. "When you understand that, there's not much you can do."

More so than any other athlete in Cleveland history, Vizquel connected with the community through public appearances, a clothing line, and a best-selling autobiography. "Cleveland grew up with me," he says. "And I would like to retire as an Indian." Catch the Tribe's season-ender at 2:10 p.m. Sunday on Fox Sports Ohio. -- Steve Albanese

Jon Bradley banks on a change of pace -- and maybe $25,000 -- when he crosses the finish line at the Road Runner Akron Marathon. After last year's race, organizers modified the 26.2-mile course to eliminate a steep hill near the beginning and to bypass a railroad crossing that stalled some runners for three minutes. They also tossed in a $25,000 prize to the marathoner who can smash the Ohio record of 2 hours, 10 minutes, and 29 seconds. "I think it'll be a faster race," says Bradley. "I'm sure some runners will have a good chance at breaking the record." Even if no one does, there's a post-race party. The marathon starts at 8 a.m. Saturday between the Morley Health Center, 177 South Broadway Street, and Canal Park, 300 South Main Street, in Akron. It's free to watch, $80 to run, $5 to party; call 1-877-375-2786. -- Cris Glaser

Austrian strongman-turned-actor Roland Kickinger (pictured) flexes his pecs at Saturday's Physique Nutrition NPC Natural Northern USA Drug-Tested Bodybuilding & Figure Championships. While hundreds of bodybuilders from 15 states compete for eight-foot-tall trophies, the 36-year-old Kickinger will tell girly-fans how he made the transition from training in a dank basement gymnasium in Vienna to becoming Mr. Austria to landing parts in Lethal Weapon 4 and TV's Son of the Beach. "I was rejected so many times after so many auditions," says the 6-foot-4, 275-pound Kickinger. "Thank God I never gave up on myself." Muscle-bulging action begins at 11 a.m. and 6 p.m. at Lakewood Civic Auditorium, 14100 Franklin Avenue in Lakewood. Tickets range from $12 to $30; call 440-942-5634. -- Cris Glaser