The Tribe gears up for an old ball game.

by Steve Albanese and Michael Gallucci 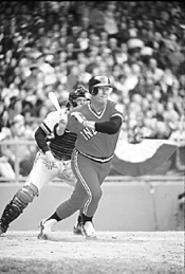 It's not that 1975 was a particularly magical time in Indians history: The Tribe lumbered through its seventh straight losing season en route to a fourth-place finish in the AL East. But by any measure, it was a landmark year for Wahoo fashion, and those deliciously red sans-a-belt unis make a glorious return Friday for Turn Back the Clock to 1975 day at Jacobs Field.

The game is against Cincinnati, which has its own, lesser reason to look fondly upon the '75 season. Says Indians Vice President of Public Relations Bob DiBiasio: "With the Reds winning the World Series that year, [the Indians] having their own all-red jerseys from that time, and this generally being one of the biggest homestands of the year, this seemed like a great opportunity to inject some fun into the schedule."

Between innings, video highlights and music from the decade will be played, and fans are encouraged to break out the polyester and bell-bottoms. "Having this game kind of dates us," DiBiasio laughs. "It makes us feel older than we are." Game starts at 7:05 p.m. at Jacobs Field, 2401 Ontario Street. Tickets range from $5 to $40, available by calling 216-241-5555. -- Steve Albanese

It takes a fearless man to throw on a pair of chaps, don a cowboy hat, and say y'all with no trace of irony. It takes an even braver fella to straddle a two-thousand-pound bull and hang on through what happens next. Both feats of courage will be on display Saturday at Buckin' Ohio, a monthly bull-riding competition that separates the men from the guys who just like to walk around dressed like Alan Jackson. Barrel racing and clowns will also be on hand at this North American Bullriding Association-sanctioned event, which culminates in a Tournament of Champions in September. Get ready for some ball-bustin' fun at 6 p.m. at Creekbend Farms, 8154 Garman Road in Medina. Admission is $10, $5 for kids. For more information, visit www.buckinohio.com. -- Michael Gallucci