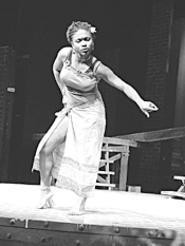 By Jeeves -- sSt in 1920s England and based on the P.G. Wodehouse stories of dunderheaded Bertie Wooster and his condescendingly superior butler, Jeeves, this show generates a fair number of chuckles, thanks to a mildly wry script and some well-calibrated comic performances. The thin premise is that Bertie, an affable but none-too-bright upper-crust Brit, is about to perform a one-man banjo concert to raise money for a church. When his banjo goes missing, Bertie's ever-helpful manservant Jeeves steps in and constructs an impromptu theatrical presentation cobbled together from Bertie's romantic escapades, using the people and props at hand. There ensues a tangled tale of stolen and mistaken identities, passionate crushes delayed and interrupted, and a faked burglary leading to a Wizard of Oz-style denouement. And yes, it's just as confusing as that sounds. Through it all, an adept cast under the inventive direction of Michael Rogaliner keeps chins up. The major drawback is that, at more than two and a half hours with intermission, it's too long-winded to sustain its atmosphere of airy jocularity. Through October 10 at Beck Center, 17801 Detroit Avenue, Lakewood, 216-521-2540. -- Christine Howey

Ears on a Beatle -- Back in the tie-dye years, the FBI was sniffing around many protesters of the Vietnam War, including ex-Beatle John Lennon and his wife, Yoko Ono. In Ears, playwright Mark St. Germain imagines what it might have been like for two domestic spies on the trail of the outspoken couple. Instead of becoming a predictable political screed, Ears focuses on the arc of the two agents' lives and attitudes, from the early '70s until Lennon's violent death in 1980. Joel Hammer is a lean, bullet-headed hardass as jaded veteran spy Howard, glaring at fuzzy-faced Daniel (Andrew Tarr) with venom as he tries to whip his careless understudy into shape. We gradually see the elder spy soften and adapt to a world that isn't as black-and-white as his endless files would have him believe. Director Charles Kartali keeps the 90-minute production beautifully focused, helping his actors explore these layered, fictitious lives within a historically accurate framework. By repeatedly addressing multiple conspiracy theories but never truly engaging any, St. Germain's script can be faulted for a weakness of political spine. But the story is told so compellingly that the result is thoroughly satisfying. Through October 10 at Dobama Theatre, 1846 Coventry Road, Cleveland Heights, 216-932-3396. -- Howey

For Colored Girls Who Have Considered Suicide/When the Rainbow is Enuf -- This Karamu production is an absolute must-see for anyone who revels in challenging, involving, and completely entrancing theater. Director Terrence Spivey has assembled a drop-dead gorgeous cast of eight strong, expressive women who take the poems penned by Ntozake Shange and turn them into a mosaic of the hopes, fears, and realities of African American women. Ranging from abstract imagery to brutally frank narration, the scenes flow together beautifully, thanks to Spivey's clever staging and silken choreography. In an outstanding cast, both Corene Woodford and Nina Domingue practically stop the show with their impassioned second-act monologues -- one, a fuming portrait of a woman who's losing herself to her relationship with a man, the other, a gut-wrenching tale of urban tragedy. Also, Kimberly Brown is sultry as a woman and fearsome as a man scoping out the neighborhood ladies, while Monte Escalante is riveting in all her pieces. Desperate as some of the situations are, a spirit of resilience and strength abides in a show that is sure to raise more than a few goose bumps, along with laughter and tears. One can hardly ask for more. Through October 17 at Karamu Performing Arts Theatre, 2355 East 89th Street, 216-795-7070 ext. 226. -- Howey

The Importance of Being Earnest -- In the hands of professionals such as those at the Great Lakes Theater Festival, this century-old classic leaps to life with astonishing vigor. The play hinges on bachelors Algernon and Jack, who are in pursuit of two lovely young women who are insistent on marrying a man -- any man -- named Ernest. Algernon, a man of voracious appetites, is played with splendid ease and casual good humor by David Anthony Smith. As Jack, Douglas Frederick is a bit too stiff and not quite ditzy enough to bring out all the fun of his character. But he loosens up in the third act and handles the collision of borrowed identities with affecting aplomb. Laura Perrotta as Gwendolyn mixes cool refinement and simmering passion into a heady concoction, and Kelly Sullivan is equally adept as the teenage heartthrob, Cecily. The first meeting of these two women quickly turns into claws-out hostility, as they assume they're engaged to the same man. Director Charles Fee gives his actors room to invent, while keeping the whip-smart language the star of the show. It's a hilarious must-see for anyone who hasn't taken a recent walk on the (Oscar) Wilde side. Presented by the Great Lakes Theater Festival through October 16 at the Ohio Theatre, 1519 Euclid Avenue, 216-241-6000. -- Howey

Leading Ladies -- One might think that, by this time, the titillation of seeing a man in a gown and makeup would have gone the way of Hedwig's other inches, but there's a new play now at the Play House that would claim the opposite. In Leading Ladies, playwright Ken Ludwig has perfectly captured the vibe of an audience-pleasing, mid-20th-century stage comedy: broad characters who frequently run in and out of doorways spouting predictable gag lines, while nary a naughty word is spoken. The script's comic approach frequently has the feel of a predigested meal served lukewarm, and anyone who's seen even one TV sitcom could easily forecast the eventual outcome. But the show is so filled with spirited performances that it survives the alternately forced and hackneyed story line. It's sure to be a community-theater staple for many years to come. Through October 3 at the Cleveland Play House, 8500 Euclid Avenue, 216-795-7000. -- Howey

Midnight Martini Show -- There is a strange attraction toward Frank Sinatra's loosely organized Rat Pack and their infamous, loopily disorganized Las Vegas shows that ran for a few golden years back in the 1960s. Frank, Dean Martin, and Sammy Davis Jr. mixed pop songs, corny jokes, and Johnnie Walker into an irreverent, hip evening that seemed to come so easy to the performers. What the Midnight Martini Show at Pickwick & Frolic proves is that it ain't easy at all. This one-hour set attempts to capture the bored-with-it-all sophistication and the slightly inebriated intimacy that the Rat Packers achieved, but it fails on several counts, from the overly eager performers to the florid songs and lame drinking jokes. Which is not to say that this no-cover show doesn't provide a convenient glide path for those who are downtown on a Friday or Saturday night and want to do something else before heading home. Indeed, some of the American standards are sung well enough. Now the task is to find directors and performers who understand that being casually funny while delivering classic tunes takes a lot of work. Or maybe a whole lot of real drinking. Fridays and Saturdays at Pickwick & Frolic, 2035 East 4th St., 216-241-7425. -- Howey

Oliver Twisted -- It has been claimed that there's a gene in some people's DNA spiral that compels them to seek out risky, potentially harmful activities, such as rock-climbing, deep-sea diving, and parking at expired meters in Cleveland Heights. True to their risk-adoring genes, the seven-member group titled Oliver Twisted (made up of former members of the now-defunct Second City Cleveland) does audience-inspired material exclusively, without the safety net of scripted modules. And thanks to a fortunate blending of physical types and personalities among the performers -- along with their determined insistence on yanking every loose comedic thread -- this is an improv experience that will leave you laughing far more often than wincing. The troupe's resident nutcase, Randall Harr, is a fairly normal-looking fellow who transforms into a maniacally, often hilariously intense embodiment of whatever animal, vegetable, or mineral he's been assigned. Mondays at Hilarities Comedy Club at Pickwick & Frolic, 2035 E. 4th St., 216-736-4242. -- Howey