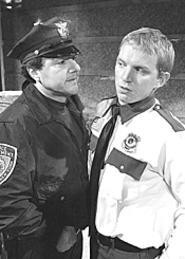 Crowns -- In the African American community, churchgoing women still bedeck their heads in feathery and sequined flights of fancy, and that tradition is given a loving and rousing tribute in this show. Playwright Regina Taylor has adapted this work from the book Crowns: Portraits of Black Women in Church Hats, mixing stories, mini-profiles, and gospel music into an evening spilling over with exuberance. Even though the meandering script never lingers long enough on any one character to register a distinct personality, the gifted Play House cast of six women and one man infuses the 100-minute production with enough energy to power one of Elton John's old electrified chapeaus. The exceptionally capable cast is led by Tony Award-winning Trezana Beverley, who delivers a whirlwind interpretation of Mabel, a woman who dances and sings with high-spirited abandon and has the most "hatitude" of them all. Through November 7 at the Cleveland Play House, 8500 Euclid Avenue, 216-795-7000. -- Christine Howey Hurlyburly -- As Lily Tomlin once observed, reality is just a crutch for people who can't deal with drugs. But there are no such crutches in sight in David Rabe's Hurlyburly, now being presented by the Case Western Reserve/Cleveland Play House Second-Year Master of Fine Arts Conservatory Ensemble. (Whew!) While this company's title is a bit stiff, there's nothing stuffy about the performance, a woozy riff on the drug-soaked culture of mid-1980s Hollywood. The central character is Eddie, who tries to prop up his volatile friend Phil (a scary Joshua John McKay) while trying to make sense of a world beset by nuclear bomb threats, anomie, and of course, chicks who screw up your life. In this Rabe-sian world, all females are airheads, bimbos, or both, so Donna (played with affecting innocence by Elizabeth Davis) is found loitering in a hotel elevator, Darlene (a borderline-sensible Nicole Hedges) is passed around, and nude dancer Bonnie (given unvarnished honesty by Bailey Varness) sleeps with anything that moves. Among the men, Samuel Holloway perfects a casually sarcastic élan as Mickey, and Jason Michael Miller's Artie is a jittery, grinning bundle of nerve endings. Unfortunately, the breakneck pace set by director Ronald Thomas Wilson doesn't allow time for the characters to actually think up the lines they're saying. Through October 23 at the Cleveland Play House, 8500 Euclid Avenue, 216-795-7000. -- Howey

Lobby Hero -- In this thoroughly engrossing Beck Center show, playwright Kenneth Lonergan (he wrote the screenplay for You Can Count on Me) introduces us to Jeff, a young slacker with zero leverage over his life, who possesses a goofy reliance on the ultimate power of truth. He recently got tossed from the Navy for smoking weed and is now ensconced behind a tall desk as the graveyard-shift security guard at a New York apartment house. He doesn't get many visitors, except his supervisor and a couple beat cops, but those icons of authority are enough to trigger a study of moral choices woven into some perceptively clever dialogue. In a supremely able cast, Matthew Joslyn is spectacular as Jeff, an electrified, spring-loaded coil of unfocused energy who is as infuriating as he is lovable. Director Seth Gordon is unafraid to have his actors take risks, often speaking on top of each other during excited moments (as real people do); as a result, he creates a completely believable scenario that demands attention. Through October 24 at Beck Center, 17801 Detroit Avenue, Lakewood, 216-521-2540. -- Christine Howey

Othello, the Moor of Venice -- In Bad Epitaph Theater Co.'s version of Shakespeare's Mediterranean bloodbath, director Alison Hernan has boldly top-dressed the formerly controversial theme of interracial marriage with gender politics, featuring a fiendish lesbian villain who happens to be in a same-sex union. You can almost hear the fundamentalist wingnuts screaming, "What's next? Iago having sex with a golden retriever?" That's unlikely, since no self-respecting canine would come within 10 feet of Iago as played by Meg Chamberlain. Using her rapier-sharp diction and some regrettably broad sarcastic glances, Chamberlain manipulates her hated boss Othello into a froth of jealous rage -- focused on his entirely innocent and devoted wife, Desdemona (Magdalyn Donnelly, in a lovely and heartbreaking turn). While it's successful on several counts, this production misses the deeper soundings of love and betrayal, largely due to an unimpressive rendering of Othello himself. Performed in the Orthodox, a quaint church now taken over by CPT, the show boasts a few resonant moments that never add up to the full Shakespearean symphony. Through October 23 at the Orthodox, Cleveland Public Theatre, 6203 Detroit Avenue, 216-556-0919. -- Howey

The Phantom of the Opera -- While it's tempting to poke fun at this Broadway warhorse and its glitzy pretension, this touring production at the Allen Theatre displays none of the tired disinterest or mechanical line readings that can plague casts in such oh-so-familiar shows. The story's the same: A Paris opera house is haunted by a tuneful ghost, who demands his own box at every performance and a generous monthly stipend to boot. He falls for Christine, the lovely understudy who vaults to stardom thanks to the Phantom's ethereal leverage and a flood of notes he keeps sending to the opera's hapless managers. Meanwhile, the company's nominal stars huff and puff their way through performances that are vexed by unseen voices and the occasional dead man hanging. Scary stuff aside, every Phantom must rely on strong performances in key roles to carry the day. Fortunately, Gary Mauer and Rebecca Pitcher musically anchor this rendition as the Phantom and haunted Christine. Harnessing the dark side with admirable flair, Mauer sends shivers as he sings the familiar "The Music of the Night" and kicks up some emotion in his duets as Christine's "angel of music." For those who love these quasi-operatic show tunes, this production stands more than a ghost of a chance of pleasing. Through November 7 at the Allen Theatre, 1519 Euclid Avenue, 216-241-6000. -- Howey

Summer of ¹42 -- Yep, it's a musical version of the movie, and it's a good thing Kalliope decided to do it, since it requires adolescent boys to sing and act. Thankfully, this company's dedication to splendid voices and evocative presentations has landed it some very talented local high schoolers, who perform like seasoned troupers. Alex Wyse plays the lead, Hermie, with such a cute and fragile boyishness, you just want to hug him (and it doesn't hurt that he looks like a teenage Fred Astaire). Hermie falls for an older woman (of say, 30) named Dorothy, acted and sung to perfection by Jodi Brinkman. The original music by David Kirschenbaum ranges from average to excellent, with the high points being a hysterical double-date song sketching the awkward moves boys make on girls in "The Movies" and a tender ballad titled "Promise of the Morning." In supporting roles, Aaron Dore is terrific as Hermie's rough-and-tumble pal Oscy, and Jay Strauss gets some laughs from his Walter Winchell bits. Director Paul F. Gurgol finds all the nooks of sentiment and crannies of humor (a boy buying his first "rubbers" in a drugstore) to give everyone a twinge of longing for the blissfully naive good ol' days. Through November 7 at Kalliope Stage, 2134 Lee Rd., Cleveland Hts., 216-321-0870. -- Howey

Triple Espresso -- If Lawrence Welk had been a jokester and not a bandleader, this is the kind of comedy show he would have created. Squeaky-clean and with all the edge of a Nerf ball, this mildly humorous pastiche of familiar gags, magical flimflam, and shadow puppets (yes, shadow puppets!) is the perfect production to send your not-so-hip grandparents to on their anniversary. The plotless exercise is based on the entirely believable premise of a miserably unfunny 1970s comedy trio, back for a reunion at a coffeehouse owned by an unseen native of Zaire with a funny, African-sounding name (ha-ha). Thus the reason for a title that does not, alas, refer to the level of stimulation provided. Co-authors (with the absent Bill Arnold) Michael Pearce Donley and Bob Stromberg overdo their signature mugging, with the latter working his baffled-Dickie-Smothers double takes way too hard. Triple Espresso has been playing for a long time in some cities, thanks to its genial good humor. But if you like your comedy with bite, this one will gum you to death. Through January 30 at the Hanna, 2067 East 14th St., 216-241-6000. -- Howey