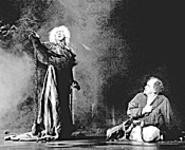 A Christmas Carol -- This beloved ghost tale of Ebenezer Scrooge and his mystical road trip from cheapskate to effusive lover of humanity is a familiar annual production, though here it seems more contemporary than ever: Victorian England's laissez-faire approach to the indigent and Scrooge's own take ("Prisons and workhouses should suffice for the idle poor") is finding a sympathetic echo in our social-program-depleted "ownership society." Presented as a story within a story, Dickens' message is delivered through a dazzling array of stage effects -- including disappearing gravestones, towering and ominous apparitions, and so much fog that you're likely to leave the theater with wrinkle-free clothes -- but it doesn't quite explicate the personal struggle that Scrooge must endure before his rebirth as a man of generosity. Seen through the eyes of young Master William, a member of the Cleaveland (ahem) family, the plot unfolds as members of the boy's affluent household take on the roles in Dickens' work, including himself as Tiny Tim and the snarky butler as evil Ebenezer. Dudley Swetland as Scrooge reprises his rendition of the ultimate miser, spitting out a world-class "Bah, humbug!" Presented by the Great Lakes Theater Festival through December 23 at the Ohio Theatre, 1519 Euclid Ave., 216-241-6000. -- Christine Howey

If a new play about Christmas opened two years ago and nobody in the country has produced it since, that might indicate there's too much ho-hum in the ho-ho. And that's the case in this gender-flipped replay of the Dickens classic, set in ragtime-era New York. Norman Allen's script lurches from sarcasm to sugary sentiment to theatrical in-jokes while trotting out a number of creaky period songs that would have been better left undisturbed. The Kalliope troupe offers its usual lavish costumes, but this time the voices aren't up to their high standards. Although John Frederick Herget IV and Kimberly-Fain Bryant handle their tunes with pizzazz, and director Paul F. Gurgol turns in a nifty tap number as cheery Fezziwig, there is little punch in this Carol. Primary responsibility for this rests with Adina R. Bloom as rag-trade magnate Evelyn Scrooge, who chews her lines with the same overcooked intensity that she brings to her laboriously phrased solos (performed in a single spotlight, standing motionless at center stage like a Madame Tussaud wax replica of herself). It's a shame Russ Borski's charming, relentlessly efficient set is wasted on this lumpy and insipid serving of Christmas pudding. Through December 19 at Kalliope Stage, 2134 Lee Rd., Cleveland Hts., 216-321-0870. -- Howey

Here in Cleveland, it's hard to imagine the intensity of hypercompetitive New York City dining, where trendy eateries are often booked solid for weeks or even months in advance, leading desperate gastronomes to pull every VIP string or negotiating ploy they can summon to get their name on the reservation list. This culture drives Becky Mode's Fully Committed, a one-man show at Beck Center that is far more fascinating as a performance challenge than as enlightening theater. The man on the hot seat is Sam, an aspiring actor who is holding down the reservations fort while his supervisor is supposedly stuck in traffic. From the moment Sam shucks off his coat, all the phone lines are blinking with calls from society matrons, out-of-town hopefuls, and assistants to various A-listers. Juggling the voices and mannerisms of more than 30 characters, lone actor Nicholas Koesters is tasked to keep all the parts distinct and amusing while performing at a breakneck pace for almost 90 minutes. Under the direction of Curt Arnold, the immensely talented Koesters clicks into one characterization after another with machine-tooled precision. If the script were of a similar quality, this would truly be a memorable feast. Through December 19 at Beck Center, 17801 Detroit Ave., Lakewood, 216-521-2540. -- Howey

Highway Ulysses -- One of the saddest commentaries on human existence is the universality of righteous violence and the damage it wreaks on everyone it touches. In Homer's classic tale The Odyssey, we follow the travails of battle-weary Odysseus (that's Ulysses to you) as he wends his way home after his diabolically clever defeat of Troy. A new take on this old theme is now on display in Dobama's Highway Ulysses, a hypnotic sampling of the Homeric tale, recast as the story of a Vietnam War vet who, a dozen years after his return, is trying to rejoin his son after the death of his estranged wife. Employing an operatic score that swoops from dissonance to odd melodiousness, and using recitative to move the action forward, Eckert and director Sonya Robbins create a splendidly theatrical experience that offers enormous rewards for those who don't struggle against the play's innovative, disjointed structure. While not a commentary on war per se, Highway Ulysses invites us to see one man's journey through that brutal prism -- and who are we to say this isn't widely applicable? We are often taught, in subtle ways, to love the trappings of war -- perhaps enough to forget its dreadful outcomes. Through December 12 at Dobama Theatre, 1836 Coventry Rd., Cleveland Hts., 216-932-3396. -- Howey

The Lark -- The story of Joan of Arc -- the 15th-century teenager who led the French army to victories over England, urged on by the voices of saints -- is endlessly fascinating: Combining aspects of feminism, militarism, religious inspiration, sociological upheaval, and cross-dressing, Joan's story is one in which nearly everyone can find a cause to cheer or deride. In the Cesear's Forum production of Jean Anouilh's The Lark, Joan's brief bio is sketched out during the trial that eventually condemns her to a flaming death at age 19. Blending two adaptations of the original script by Christopher Fry and Lillian Hellman, director Greg Cesear attempts to capture a fresh perspective on the intersection of politics and morality -- not such an irrelevant issue right about now. Unfortunately, what's been created here is an oddly sterile, bloodless recitation of a story that should fairly pulse with glory and pain. Joan's confounding qualities of insolent confidence and devout humility are portrayed convincingly by chisel-jawed Laura Borgione, but the other key roles add little. Presented by Cesear's Forum through December 11 at Kennedy's Cabaret, Playhouse Square Center, 1501 Euclid Ave., 216-241-6000. -- Howey

Plaid Tidings -- Yes, the boys in plaid are at it again in the Play House's seasonal encore of four-part guy-harmony. The conceit is that some 1950s-era projection-club geeks from high school formed a singing group, à la the Four Freshmen, and started to perform pop tunes in the nascent era of rock and roll. But their careers were cut fatally short by a car crash -- that is, until they revisit Earth on a mission to create a holiday TV show. And so they do, with songs ranging from "Let It Snow" to "Moments to Remember." The chaps are in fine voice, but the overall timing seems a bit flabby this time around. And the supposedly comic character of Jinx (he gets nosebleeds on high notes) is filled by Paul Binotto, a fellow with no discernible flair for comedy. Rodney Peck as Sparky and Christopher Youngsman as Smudge are intermittently amusing, but the best performance is turned in by Scot Fedderly, who seems to have more energy than the other three put together. If you like those syrupy-smooth sounds, this is an inoffensive way to get your holiday fix. But don't expect to laugh yourself silly. Through December 19 at the Cleveland Play House, 8500 Euclid Avenue, 216-795-7000. -- Howey The Trip to Bountiful -- Half a century ago, Horton Foote wrote The Trip to Bountiful, the story of three average Texas folks sharing a Houston apartment, along with their separate dreams: The elderly mother, Carrie Watts, longs to visit her childhood home in Bountiful one more time; her middle-aged son, Ludie, pines for both children and a raise at work; and his wife, Jessie Mae, just wants to rule her domestic roost and go see a flick now and then. These dreams are modest by anyone's standards, but they take on a fabulous glow in the hands of three terrific actors, under the experienced direction of Lucia Colombi (she and Ensemble did this show 12 years ago). As good as they all are, Mother Watts is the heart of the story, and Bernice Bolek is equal to the task. Presented by Ensemble Theatre through December 12 at the Cleveland Play House, 8500 Euclid Avenue, 216-321-2930. -- Howey