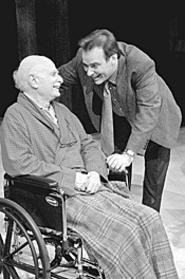 Michael Stanley Superstar: The Unauthorized Biography of the Cuyahoga Messiah -- When Satan himself presents the opportunity to be world-renowned, fledgling rocker Michael Stanley avers that he'd be satisfied with just being famous in Ohio -- more specifically Northeast Ohio, the area from Brunswick to Willoughby to Sheffield Lake. That's one of the many comedic high points in Michael Stanley Superstar, a loose, energetic, and frequently hilarious faux profile of the Cleveland (and nowhere else) rock legend. The Last Call crew traces Stanley's richly fictionalized career in both live scenes and manufactured video clips: Stanley was born in 1948 in Cleveland ("home to more than 800 people"), where his hardscrabble family was forced to live in a Tyco plastic playhouse for most of his youth. But once in high school, our hero joins three geek musicians so they can pound out "hard-hittin', no-quittin', girl-gittin' rock and roll." Mike Polk, wearing the worst fake beard ever devised, plays Stanley with just the right amount of dazed earnestness. The show's many knowing Cleveland references, plus some knock-off MSB musical accompaniment and a relentlessly outrageous script, make it irresistible. Presented by Last Call Cleveland on Friday, January 21, at the Cleveland Black Box Theater, 1210 West Sixth Street, 216-696-4242. -- Christine Howey Triple Espresso -- If Lawrence Welk had been a jokester and not a bandleader, this is the kind of comedy show he would have created. Squeaky-clean and with all the edge of a Nerf ball, this mildly humorous pastiche of familiar gags, magical flimflam, and shadow puppets (yes, shadow puppets!) is the perfect production to send your not-so-hip grandparents to on their anniversary. The plotless exercise is based on the entirely believable premise of a miserably unfunny 1970s comedy trio, back for a reunion at a coffeehouse owned by an unseen native of Zaire with a funny, African-sounding name (ha-ha). Thus the reason for a title that does not, alas, refer to the level of stimulation provided. Co-authors (with the absent Bill Arnold) Michael Pearce Donley and Bob Stromberg overdo their signature mugging, with the latter working his baffled-Dickie-Smothers double takes way too hard. Triple Espresso has been playing for a long time in some cities, thanks to its genial good humor. But if you like your comedy with bite, this one will gum you to death. Through February 13 at the Hanna Theater, 2067 E. 14th St., 216-241-6000. -- Howey Tuesdays With Morrie -- Since its release in 1998, Mitch Albom's memoir has become the marketing equivalent of a Tickle Me Elmo doll -- a comforting, enormously popular, warm-and-fuzzy recollection of Morrie Schwartz's doomed battle with Lou Gehrig's disease and the lessons Albom learned by reuniting with his former sociology prof in his dying days. Co-written by Albom and Jeffrey Hatcher, this Tuesdays includes most of the highs (Morrie's rapid-fire wit) and lows (a series of bubble-gum insights) that appear throughout the book. It features a couple of excellent performances -- by Bernie Passeltiner as Morrie and Charles Kartali as Albom's narrator -- but it can't quite overcome a script in which too many of the characters' imperfections have been buffed out and the characters are never permitted to respond to each other in any way except as teacher and student. It's hard to quibble with a dying man's last thoughts -- but this isn't a hospice, this is theater, and force-feeding banal epigrams seems more appropriate for a needlepoint pillow or a Mylar balloon than an involving theatrical presentation. Through February 6 at the Cleveland Play House, 8500 Euclid Ave., 216-795-7000. -- Howey