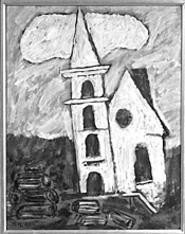 Aerossault: The Artwork of Grant Smrekar -- Grant Smrekar's work is evidence that there's more to graffiti than just gang tags and foul language. His often political pop art -- full of American flags, helicopters, and what looks like Ché Guevara -- poses timeless questions about politics and war; clearly, he wonders whether America's overseas involvement reflects a democratic society. His garish portraits of pop music icons, meanwhile, are fashioned by reproducing photographs using a stencil technique: Neon likenesses of Debbie Harry and Björk evoke Andy Warhol's images of Marilyn Monroe. The works' clumsy pine frames leave something to be desired, but the spray and acrylic paintings are well composed and skillfully rendered. With Aerossault, Smrekar dispels the negative connotations associated with graffiti, at least within the walls of the gallery. Through April 16 at Nimbis Gallery, 1836 W. 25th St., Suite 1B, 216-522-1836. -- Nadia Michel

Curve -- Hair pomade on the walls may sound like a scene from Barbershop gone bad, but Kori Newkirk thinks it's a good idea. His effort here is noteworthy, the results are less so. Giant fingerprints, composed of spots of pomade, are painted directly onto white walls, the result of days of work for Newkirk and his team of assistants. Reminiscent of fingerprinting, the work alludes to crime and racism; the goo itself is a reference to African-American culture, where local hair salons often play an important social role. The issue of identity is at the forefront: There's nothing more unique than an individual's fingerprints. Newkirk's exploration of unconventional media gives new meaning to the phrase "the medium is the message." The downfall of that idea is that one must read the adjacent label to know the "paint" is actually hair product. And without knowing, the work takes on a sort of uni-dimensional aspect. After all, any common criminal -- or artist, for that matter -- can leave fingerprints on a wall. Through May 23 at MOCA, 8501 Carnegie Ave., 216-421-8671. -- Michel

In Black and White -- The black-and-white works by this show's four artists make a surprisingly colorful impression. Kristen Regas's Blissful series -- intricate, playful figures that could be mistaken for the royal family in a deck of cards -- is made up of graphite illustrations and acrylics on canvas that are larger reproductions of the drawings. Most puzzling are Wayland T. Whitley II's pastels and mixed media: The recurring little round face he uses in all four of his pieces has a sinister quality, making it hard to tell whether it's happy or sad. The show reveals not only that there are many shades of gray, but also that black and white have tonal variations that range from cool to warm, depending on the paint or photographic paper used. Also not to be missed is Mosaic's selection of unique handmade soaps, incense, and candles, as well as an interesting display of silver and beaded jewelry by local artists. Through April 23 at Mosaic, 16860 Lorain Ave., 216-252-2099. -- Michel

It's a Wonderful Life: Psychodrama in Contemporary Painting -- The 49 works that make up this Spaces show address death, violence, and other episodes of daily living gone wrong. Twenty-four artists, working in a diverse array of contemporary genres, present intimate glimpses into the darker parts of their psyches; the overall effect, unsurprisingly, is rather gloomy and disjointed. Jason Sleurs's eye-catching, somewhat grotesque animal paintings (an otter aggressively gnawing at a starfish; a beaver mounting a platypus) collide with Marlene Dumas's watercolor portrait of an obnoxious kid ("Rotten Child"). A troubled childhood inspired Henry Darger's work; his lingering pain is palpable in the fascinating watercolor "Free Child Prisoners," in which numerous pretty little girls are fleeing what looks like a series of explosions on the horizon. But if the show's range of themes and colors is exhilarating, its general pessimism can be overwhelming. For a more jovial frolic, the 1947 film of the same name is a safer bet. Through May 14 at Spaces, 2220 Superior Viaduct, 216-621-2314. -- Michel

Modern American Masters: Highlights From the Gill and Tommy LiPuma Collection -- Native Clevelander Tommy LiPuma's eye for art rivals his ear for music. Nominated for 30 Grammys, the renowned producer also cultivated an in-depth knowledge of modern American art, his passion for which is reflected in the 24 works on display. It's an overview of what LiPuma considers to be the best by American modernists from the early 20th century. Indeed, paintings by Marsden Hartley, Arnold Friedman, Arthur Dove, John Marin, and John Graham -- all underappreciated gems -- are perfect examples of how the use of pure, luminous color and intense texture revolutionized the art world and spawned abstract expressionism. A fine initiation to underexposed American talent, the show also highlights the pleasure art can provide for people from all walks of life. Also on view, Burchfield to Schreckengost: Cleveland Art of the Jazz Age (through July 18), a celebration of rarely seen works by other Clevelanders who give the city a good name. Though July 28 at the Cleveland Museum of Art, 11150 East Blvd, 216-421-7350. -- Michel

Salvador Dalí: Master of Surrealism -- Masterfully etched details and expertly created splashes of color only begin to describe the nearly 80 works on display, which focus on Dalí's fascination with the story of Faust, mythology, and sexuality between the 1930s and the late '60s. Famous for his dreamlike, meticulous depictions of daring themes, the Surrealist constantly explored techniques that made his work all the more fascinating: In the large illustration "Medusa," the subject's hair was created by throwing an ink- and acid-soaked octopus at the image. On another wall, two large Aubusson tapestries are rare and beautiful reproductions of Dalí's art. His work was often outrageous, sometimes classic, but always an interesting glimpse into the mind of a highly original man. The same goes for this show. That Contessa has succeeded in procuring such an extensive collection is commendable, and a considerable highlight for Cleveland's art scene. Through April 30 at Contessa Gallery, 24667 Cedar Rd. (Legacy Village), Lyndhurst, 216-382-7800. -- Michel

Senenkunya: Many Voices, One Family -- Everyday objects displayed in their cultural context create an intimate portrait of life in West Africa. Photographs by Peggy Turbett (photo editor for The Plain Dealer) document her visit to Mali in 2002: Colorful rituals and the daily tasks of women are pictured in vibrant, large-scale images, revealing an alternative West African reality that has nothing to do with war or poverty. On the main floor, artifacts are displayed alongside life-sized reproductions of village homes and other structures. Among the highlights: the Toga, a decision-making area with a low ceiling that forces village men to sit down, thus eliminating height inequalities that might upset the balance of power. Another realistic scene is a market cart, strewn with hanging fruit and resting alongside the facade of a 13th-century mud mosque. In this way, utilitarian objects take on resounding new life as art. It's an engaging, hugely enlightening experience. Through August 29 at the Museum of Natural History, 1 Wade Oval Dr., 216-231-4600. -- Michel

Small Monuments -- The word "monument" conjures images of the Taj Mahal or the Statue of Liberty. This inaugural exhibit at MOCA's Sky Lounge, delivers on the "small," but not much else. Small-format paintings and drawings are meant to examine the relationship between monuments and public and private space. The title seems far-fetched for this selection of works, which have little to do with the subject, or even with each other. Charles Kanswisher's Real Estate Drawings -- graphite replicas of houses based on photographs of real estate -- depicts typical Ohio architecture and vacant land. Problem is, the homes don't look quite old enough to be considered monuments, nor are they particularly remarkable in any way. Only Christine Kuper's abstract-meets-representational urban landscapes might fit the bill: Her paintings are both aesthetically pleasing and reminiscent of interesting locations. Sky Lounge is 95 linear feet of wall space on MOCA's mezzanine level, dedicated to showcasing emerging local artists. It's an exciting new space; sadly, its inaugural exhibit can't match its appeal. Through May 23 at MOCA, 8501 Carnegie Ave., 216-421-8671. -- Michel